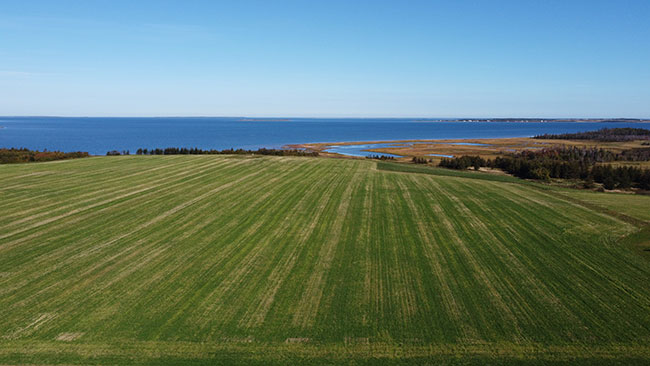 One of the four experimental fields used in the area of Kensington in PEI Living Laboratory initiatives program of AAFC. Photo courtesy of Athyna Cambouris.

Every farmer knows that every field is different – and that there can be a great deal of difference within fields as well. Until recently, the tools to analyze these differences have been out of reach for many farmers.

Despite a growing body of research demonstrating in-field variation, typically, fields are still managed on a field-by-field basis, which can mean both profit losses and negative impacts on the environment. But intensive soil sampling is expensive and time-consuming. Another approach is needed.

Athyna Cambouris is a research scientist with Agriculture and Agri-Food Canada in Quebec City. She’s been studying applications of precision agriculture since 1996, when she implemented her first experiment on variable application of phosphorous and potassium in potatoes.

Precision agriculture technology has come a long way since the 1990s. These days, Cambouris is working on projects in Quebec, New Brunswick and Prince Edward Island focused on delineating in-field management zones based on soil properties using ground-penetrating radar and soil electrical conductivity sensors, among other soil sensors.

It’s a suite of tests called proximal soil sensing (PSS), and they are both commercially available and affordable.

The goal of her research, Cambouris says, is to target fertilization in potatoes to improve productivity and profitability. “Potato is a good crop [to study] because nitrogen doesn’t only influence yield but also quality. If you put on too much or not enough N, you’ll have impacts,” she explains. “This is one of the reasons I want to work with nitrogen. It’s a great challenge because N presents so much spatial and temporal variability, and part of that can be controlled using management zones in the soil.”

Soil properties that particularly influence N’s effectiveness include various parameters including soil texture, humidity and organic matter, she says. If farmers can delineate management zones (MZs) based on factors like these, they can better target their inputs, especially N.

Living Labs projects
Cambouris is the lead on one study under the AAFC Living Laboratory projects with two growers in the Maritimes that look at using a precision N management approach using MZs. The project began in 2019, and Cambouris and her collaborators delineated MZs using soil electrical conductivity, topography and yield data from yield. Then they characterized the MZs in terms of soil properties. During the growing seasons of 2020 and 2021, they evaluated the plant N status of the crop using vegetation indices extracted from drone imaging.

“We’re doing variable rate of N preplant with one grower. We applied varied rates at preplanting based on MZs we’ve delineated, based on yield, topography, and electrical conductivity,” Cambouris explains. The other producer in the Living Labs project, says Cambouris, wanted to study VR applications in-season; data from that site is currently being analyzed.

Cambouris says looking at soil sensor data is complex, and doesn’t always suggest the same management approaches. But that’s partly the point. “Using soil sensors will help you to capture the spatial variability of the field, but then you have to relate [that data] to what it exactly means. It doesn’t mean the same thing from field to field across the country,” she says.

High soil electrical conductivity, for example, can be linked to clay soils with higher organic matter and higher water holding capacity, and thus higher yields, in PEI and Quebec. But when Cambouris ran the same experiments on fields in New Brunswick, higher soil electrical conductivity was linked to lower yields. “We were able to relate [this finding] to soil texture,” she says. “In New Brunswick, the soil texture is more loamy than sandy, and they were having drainage problems. That decreased yield.

“We know that precision agriculture is a science linked to different parameters that could be site-specific. When you identify the soil properties linked to sensor data, you can extract that information and go into another field that presents the same type of soil with similar approaches.”

Management approaches
Cambouris says it can be tough to directly link yield boosts to a MZ-based precision agriculture approach. “Normally, to see if you have a good field showing yield variation, you need to have at least three years of potato yield data, then you can analyze that and see if there is a difference, and you have to look to the climate data,” she cautions.

But in one study, Cambouris was able to demonstrate that a MZ-based approach showed a difference of six tonnes per hectare per year in a specific field.

Once soil properties are better understood in discrete zones, producers can take steps to correct problems in those zones. In a study directed by Cambouris in New Brunswick, for example, a field in the study with high electrical conductivity was characterized by the “wettest soil, the finest soil texture and the lowest tuber yield.” Drainage or land leveling in that portion of the field could correct the problem.

Cambouris says the technology is available in many Canadian provinces. But paying for PSS tests is just the beginning. Producers have to put in the work to understand the management zones and steer away from uniform applications.

“They have to be engaged, and say for example, ‘I can vary my potassium based on management zone, same thing for phosphorous, and the pH map can be very interesting to help limit disease, or I don’t want to put on too much calcium,’ etcetera,” she says. “You can save money by saving inputs.”