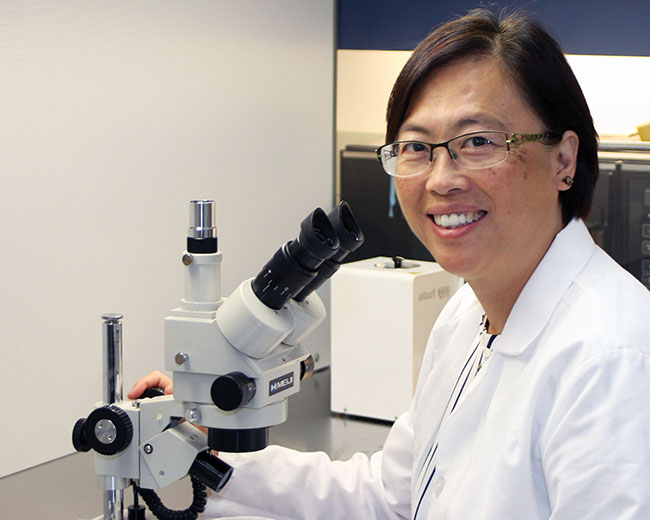 Helen Tai says it’s advantageous to look at diploid breeding for CPB resistance so we can regularly introduce into our breeding lines different sources of beetle resistance, to keep ahead of the beetle’s adaptation to resistance. Photo courtesy of Agriculture and Agri-Food Canada.

Whenever children visit Agriculture and Agri-Food Canada’s Fredericton Research Station to glimpse potato research scientist and breeder Helen Tai’s program, she always asks them, “Do you have any wild relatives?”

After the inevitable “Yes!” Tai’s rejoinder – “Well, potatoes have hundreds!” – summons a vision of a long table lined with jostling spuds.

What it actually means in practical terms is that potato breeders like Tai have a wealth of resources from which to draw as they develop new and better varieties.

At the top of the list is Colorado Potato Beetle (CPB) resistance. The insect pest is widespread in every potato-growing region, and in Canada it is the industry’s top pest. But over-reliance on chemical insecticides has the negative result of selecting for insecticide-resistant populations of CPB, further compounding the problem.

“A key thing we have to remember about the beetle is that it’s dynamic and adaptable,” Tai says. “Even if we come up with one strategy for resistance we always need to have more strategies to integrate. We’re always on the lookout for diversifying the genetic variation so that we have more sources of beetle resistance.”

One promising source is the large pool of wild relatives in the Solanaceae family.

More than 30 years ago, AAFC’s research program obtained germplasm from more than 200 wild relatives of potato, Tai says. Over the years, this material has slowly been integrated into the breeding program. Some of these species naturally exude a beetle-repelling chemical in the leaves; Tai’s work has involved breeding this quality into new varieties.

Breeding tetraploid potatoes is a long and complicated process due to the sheer number of potential combinations in the progeny, Tai explains. “As a breeder, you have a low capability of predicting what will happen in the crosses of a tetraploid.”

“For us, it’s advantageous to look at diploid breeding for CPB resistance so we can regularly introduce into our breeding lines different sources of beetle resistance, to keep ahead of the beetle’s adaptation to resistance,” she explains.

This isn’t as simple as it might seem. To combine all the qualities required by the industry into a new potato variety – yield, processing quality, colour, and drought, disease and insect pest resistance – wild genetic information has to be combined with modern genetics from tetraploid potatoes.

“This takes two crosses rather than a single cross,” Tai explains. “But now we have the materials necessary to move forward in breeding diploids. This requires inbreeding the lines.” Once you have inbred lines, you can cross them, and the crosses are predictable: alleles are fixed at all points of the genome. That predictability reduces the length of the breeding process by half.

Her program has released a new, CPB-resistant variety called F14085; in Canada, new varieties have to be “adopted” by interested parties who then license (and name) the variety and release it to growers.

So far, neither CPB-resistant variety from Tai’s program has been adopted, but AAFC has partnered with Washington State University to do further tests with F14085. 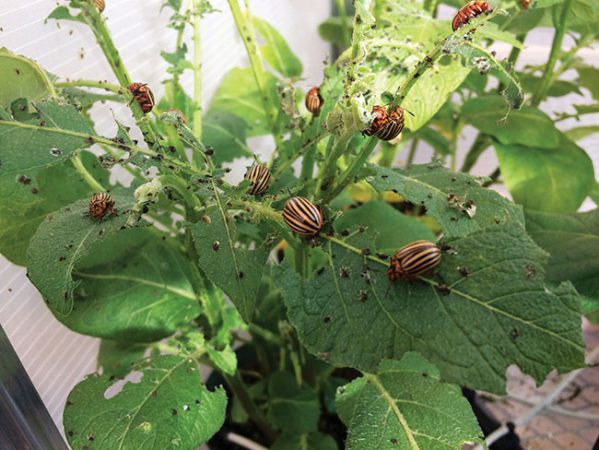 Colorado potato beetle is widespread in every potato-growing region, and in Canada it is the industry’s top pest. Photo courtesy of Agriculture and Agri-Food Canada.

Industry interest
Tai says the industry is slow in general to adopt new varieties for certain market classes, especially French fry processing, which is partly a function of the length of time it takes for new varieties to hit the market.

“Russet Burbank was developed 100 years ago and is still used in French fry processing. In order to shift processing away from that variety and toward varieties with CPB resistance and other traits, we need to find a better breeding process,” she says.

This also comes back to consumers, who have a specific idea of what French fries should look like, which narrows the criteria in terms of what types of potatoes can be released into the marketplace. Tai and her colleagues work hard at listening to industry representatives and grower groups about their current and future needs.

“We like to have a channel open with growers so they can understand what’s feasible on our side and what we’d like to see happen in terms of changing the breeding system to make it more responsive, and how we can incorporate more of what they’re interested in,” she says. “We want breeding programs to work better for growers.

“How do we foster new variety adoption; how do we get more interest in adoption? This is a missing piece for us, and we need to discuss it with the community.”

Tracy Shinners-Carnelley is vice-president for research and quality at Peak of the Market, an agricultural co-operative in southern Manitoba, and a representative on several national and provincial research councils. She says the arrival of CPB-
resistant varieties on the market will be hugely important for producers.

“History has shown us that CPBs have the ability to eventually develop resistance to whatever insecticide they’re exposed to – it’s just a matter of time,” she says. “In Canada we’re seeing resistance developing to the neonicotinoid class of chemistries.”

Roughly 20 years ago, when neonicotinoids (or neonics) were new, growers achieved “phenomenal” control of insect pests, and the chemical class changed the industry’s approach to control.

These days, growers are seeing “variable responses” to neonics and other classes of chemistry in southern Manitoba, Shinners-Carnelley says. “Insecticide resistance will always be a challenge even if newer chemistries are developed. That’s one reason we need genetic sources of resistance.”

The fate of neonics in Canada is also in doubt: Health Canada’s Pest Management Regulatory Agency is currently re-evaluating use of this chemical class in agriculture, with a decision expected in early 2021.

“Whether we’re losing neonics or seeing performance decline through resistance, growers need other ways of managing beetles,” she says. “Beetles will always be a problem so it’s going to take an integrated approach to management. Hopefully the genetic component can come with it to offer a level of protection.”

Eight years ago, Peak of the Market started a project evaluating new potato varieties for the fresh market, which typically has greater flexibility in terms of introducing new varieties – although agronomic and quality standards are just as high. Shinners-Carnelley says growers are always interested in new varieties and will watch the development of CPB-resistant varieties closely.

“When it comes to management of CPB, they’re interested in anything that will help,” she says. “Obviously a variety with good beetle resistance has to have good market qualities, so it’s the challenge of getting both. It’ll take innovation in both varieties and chemistries to manage this going forward.”