Researchers are getting better at understanding the enemy. Promising results mean there's hope on the horizon for stronger wireworm control. 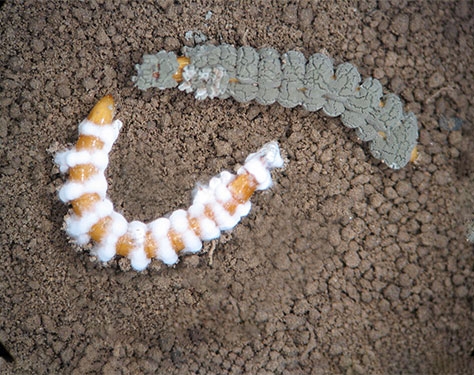 Researchers are getting better at understanding the enemy.

2018 saw fewer problems with wireworm in Atlantic Canadian potato fields than past years, according to Christine Noronha, a research scientist for Agriculture and Agri-Food Canada based in Prince Edward Island. But this doesn’t mean the problem has gone away.

In general terms, researchers are cautious about predicting wireworm damage. Of all potato pests, wireworm has proven one of the most difficult to understand. New research highlights the complexity of wireworm behaviour and the attendant difficulty of controlling the pest in the field. As few chemical controls are registered in potato against wireworm, an integrated pest management (IPM) approach is essential.

IPM forms the backbone of Noronha’s program. This past summer, her team worked with P.E.I. producers on a study combining two methods of wireworm control – NELT (which stands for Noronha Elaterid Light Trap) traps to control adult female click beetles, and mustard or buckwheat rotation crops to target the larvae.

“I asked the farmers to leave two 1.5-foot strips unplanted up the entire length of the field. We installed 30 NELT traps in each strip for a total of 60 traps in a 50-acre field,” she explains. All trapped female and male beetles were removed from the field once a week during May and June, which is their activity period. The field was planted with brown mustard. Next year, potatoes will be planted in the same fields, and Noronha and her team will collect samples to evaluate damage to tubers.

“We’re catching females in the traps, which prevents the laying of eggs, but by using the rotation crop we are trying to control the larvae as well,” Noronha explains. “The two methods combined may give us reduction in damage for a longer period.”

“We’re catching females in the traps, which prevents the laying of eggs, but by using the rotation crop we are trying to control the larvae as well,” Noronha explains.

Wireworm population in the field is the biggest problem confronting researchers and producers, Noronha says.

“There seems to be little correlation between bait trap numbers and damage,” she says. “Often, we’ll put out our baits and think, ‘we don’t have a problem,’ and then we see damage.”

In a lab study looking at horizontal wireworm movement, Noronha’s team found that wireworms in the larval stage can easily move about 3.6 metres in 24 hours to reach bait traps; by 48 hours, 50 per cent of wireworms in the study had reached the bait. The team also found that when bait traps were placed at 2.4 and 2.6 metres respectively, wireworms would reach the first trap, start to feed on the bait and then move to the second bait before the food was depleted.

“Even if there’s food available, they’ll still move on. If you remove your bait after seven days and you’ve captured seven individuals, there might have been 10, with three moving on to a different food source sometime before the bait was removed. So that means we can never be sure what the population is,” Noronha says. Her goal is to use this information to find the ideal length of time to leave bait in the ground.

Another field study ran in 2017-2018 looking at horizontal movement of wireworms. Noronha’s team put tubes in the ground to a depth of 80 centimetres in October and watched the wireworms move down through the soil as it froze. In the spring, 90 per cent of the wireworms had returned to the surface to start feeding by mid-May. This means early to mid-May is a good time to put out traps for monitoring, she says.

AAFC research biologist Todd Kabaluk is leading the Organic Science Cluster for wireworms for the next five years.

Kabaluk’s research focus is on biological controls for wireworms. One promising method uses entomopathogenic fungi, which kills insects by infecting them through the exoskeleton, to target wireworms in the larval stage. He’s working with the private sector to develop a control product using a virulent fungal pathogen that he discovered as the active ingredient: Metarhizium brunneum strain LRC112.

Kabaluk is also working on a spray formulation for click beetles, the adult stage of wireworms, which can be used in rotation years and on headlands where beetles emerge. The treatment is specific to click beetles and has so far proven to be relatively easy on beneficial insects.

He’s also developing another application technique for the biocontrol that uses an “attract and kill” method: a pheromone is deployed to attract click beetles to a biocontrol band laced with Metarhizium, which slowly kills the beetles over a period of days.

He’s also developing another application technique for the biocontrol that uses an “attract and kill” method: a pheromone is deployed to attract click beetles to a biocontrol band laced with Metarhizium, which slowly kills the beetles over a period of days.

To make this system work, Kabaluk invented pheromone granules; previously, pheromones for click beetles had only been available in liquid form. He’s working with a Costa Rican company, ChemTica, to develop them.

In studies using the pheromone granules, 80 per cent of the beetles picked up a Metarhizium infection three hours after application, he says.

Pheromone granules have other potential applications; one of them is mating disruption. Kabaluk is collaborating with AAFC research scientist Wim Van Herk, who is currently investigating how the granules can be used to emit a sex pheromone to confuse male beetles and disrupt their ability to find females.

“We have pheromones that will be effective against the most pestilent invasive wireworm species on both the east and west coast – those in the genus Agriotes,” Kabaluk says.

Van Herk, who has continued Bob Vernon’s research program, says pheromones are a key aspect of wireworm research. “Every species has its own unique pheromone. But we don’t have pheromones yet for the native species of wireworm in Canada. They’re unknown,” he says. “So that’s another project I’m working on – trying to identify, in collaboration with a pheromone chemist, what the pheromone structures are of the native species.”

Van Herk is working on another project in both British Columbia and P.E.I. using pheromones to trap adult click beetles in spring, as a monitoring technique. He’s currently developing a risk assessment guide for producers that will help them evaluate wireworm risk based on factors including the number of click beetles in traps, field history and damage to neighbouring fields.

Biological controls are emerging as a key growth market when it comes to insect pests, including wireworms. According to Kabaluk, the growth rate of biopesticides is about 15 per cent per year as large companies merge with the small- to medium-sized enterprises that have traditionally specialized in biological controls.

“There’s an acceleration in research and development for biopesticides, so I can see them becoming more mainstream pesticides in the future.”

It’s a much-needed advancement, particularly for the organic sector, for which there are currently few products registered against wireworm. Any new affordable and efficacious product for conventional producers would be welcomed, whether it is biological or chemical, according to Kabaluk.

“You can use wheat treated with insecticide either as a rotation crop – if you can eliminate your wireworms in cereals then the following year you have a clean field as far as wireworms go – or you can use treated wheat as an in-furrow application in between your tubers.”

Using the latter method, Van Herk’s team found damage control between 70 and 80 per cent when the broad-use insecticide Fipronil was used on wheat planted in potato rows. Fipronil is not registered in Canada, but the team is attempting to find another insecticide that is equal in efficacy.

In terms of insecticide options, producers can use Thimet 20G, an organophosphate systemic insecticide, against wireworm in potato. The product is restricted, so producers who want to use it have to complete a certification and licensing requirement.

According to Andrew Dornan, a senior field development representative for Bayer CropScience Inc., the company currently has one product registered for wireworm in potato – Titan, a second-generation neonicotinoid insecticide. “What we’ve found, particularly in P.E.I., which is really struggling with a species that’s hard to control, is that if we do combinations of Titan as a seed treatment and bifenthrin (Capture insecticide) as an in-furrow, they’re getting control of wireworm that is equal to use of Thimet,” Dornan says. However, Capture has been scheduled for a three-year phase-out ending in 2021.

BASF has also launched a new Group 30 insecticide, Broflanilide, and anticipates registrations in Canada and the United States. The insecticide has seen good performance as a cereal seed treatment for wireworm control.

“Wireworm needs a lot of research attention right now,” Kabaluk says. Producers may have to wait several years for research to translate into products that work in the field against this difficult pest – but promising results on many fronts mean there is hope on the horizon.