A biopesticide for managing common scab would be an exciting advance for two key reasons, explains Dr. Martin Filion with the Université de Moncton. 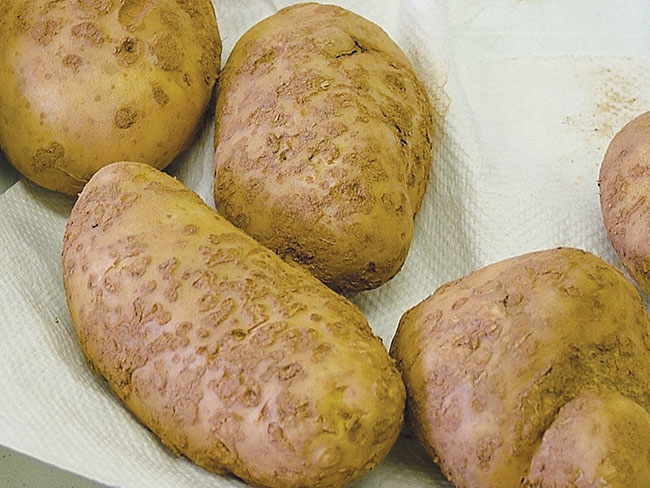 Common scab is a widespread disease that is not effectively controlled by current methods. A potential biopesticide for managing common scab.

First of all, common scab is not effectively controlled by current methods. “For common scab, any solution would be welcome by producers. People are calling me from across the country saying they have problems with the disease,” he says. “Not many chemicals are available for common scab and those chemicals are not very effective against it. And if you want to modify your field conditions, with irrigation and so on, you might be able to reduce common scab, but you will likely have other problems eventually, such as late blight or other diseases.” Also, no potato cultivar is completely resistant to common scab, and whether or not a particular cultivar is tolerant to the disease depends on the local conditions.

Common scab is a bacterial disease caused by several species of Streptomyces, mainly Streptomyces scabies. Filion points out that he and his research group at Moncton are among only a small handful of Canadian researchers working on common scab – even though the disease is widespread, economically important, and probably increasing.

Filion and his group have been investigating microbial possibilities for controlling common scab for more than a decade. He collaborates on some of this work with Dr. Tanya Arseneault and Dr. Claudia Goyer, who are researchers with Agriculture and Agri-Food Canada.

Filion outlines what is involved in finding microbes to fight the disease: “Over the years, we have isolated many, many beneficial organisms from soils or root systems of plants in the Maritimes. We use a basic microbiology culture approach, growing the isolates on Petri dishes. From there, we use a DNA approach to find genes of interest in those organisms. For example, we look for genes involved in the biosynthesis of antibiotics that could be useful against plant pathogens, or for other genetic determinants that will give the organisms a competitive advantage over the pathogens. We also look for certain groups of organisms that we believe are more efficient than others against plant pathogens.”

Through this work, Filion and his group have identified several promising candidates for reducing common scab symptoms. All the candidates are isolates of beneficial bacteria; most are species of Pseudomonas, but some are species of other bacteria such as Bacillus.

The researchers have been testing LBUM223 under laboratory and field conditions. Their studies show it can significantly reduce scab symptoms and may also boost tuber yields.

Filion explains that this strain’s mode of action is a little different than what is typically described in the scientific literature. “Usually beneficial organisms will either directly kill the pathogen, for example by producing antibiotics, or they will stimulate the plant’s defence mechanisms so the plant will defend itself more efficiently against the pathogen,” he says.

“LBUM223 produces an array of antibiotics including one that is called phenazine-1-carboxylic acid (PCA), and originally we thought this PCA molecule would just kill the pathogen. However, we discovered under field conditions that the pathogen’s population remains the same but the pathogen is no longer capable of or is less efficient at creating the disease on potato tubers. LBUM223 affects the pathogen’s virulence and pathogenicity by altering the expression of certain genes in the pathogen.”

One of the big challenges in finding effective common scab control products – whether they are biological or chemical products – is that their efficacy can be strongly influenced by local factors like the specific potato cultivar, the soil’s physicochemical properties, the particular Streptomyces species and strain, and the weather conditions.

The researchers are in the process of investigating this aspect for LBUM223. They have conducted field studies to evaluate the strain at two sites, one in New Brunswick and one in Prince Edward Island, to see how the strain performs under different soil and weather conditions and in two different potato cultivars.

As the researchers move the biopesticide towards commercialization, they will be conducting larger scale tests to determine its efficacy range. “For instance, we know that some cultivars are already more resistant to common scab than others, but the plant genetics behind this resistance are not well known at present. So we will need to see if our biopesticide is effective for all commercial cultivars,” he says.

“Regarding the pathogen’s strains, we published a paper a couple of years ago showing different strains in the Maritimes. And now we have a Canada-wide study where we are characterizing the genetic diversity of the pathogen across the country, so we will learn more about it. We are looking at testing our biopesticide against those different genetic strains of the pathogen.”

The researchers have already developed molecular markers for LBUM223 that will allow them to track the biopesticide’s persistence under field conditions. “We can extract DNA from the soil and, by using these markers, we will know exactly how many bacteria of LBUM223 are in the field after the growing season or before the next growing season.” That type of information will be helpful in meeting the regulatory requirements for the product’s commercialization.

Filion suspects that LBUM223 might be able to persist in a field for a while after harvest of a treated potato crop since Pseudomonas synxantha occurs naturally in New Brunswick and LBUM223 was isolated from a sandy loam soil that is common in Eastern Canada. If the strain is able to persist for a period of time, that could be an advantage for the next potato crop. The researchers are not expecting any environmental problems from the strain since beneficial Pseudomonas bacteria are commonly found in soils across Canada and around the world.

Filion and his group are working on a way to apply the biopesticide as a potato seed treatment. They have experimented with several formulations and have come up with a peat-based substrate that works well. The bacteria are able to stay alive and active on this substrate for at least a full year at room temperature, so retailers and growers will not have to worry about refrigerating the inoculant.

The researchers already have enough scientific data about the biopesticide’s effectiveness and safety to apply for registration of the strain, an important step toward commercialization. Filion estimates that registration and scaling-up for commercial production will take between three and five years, and he is hopeful a commercial product could be on store shelves in a few years. Filion is currently looking for the right commercial partner to bring the product to market.

This biopesticide research has received funding from the Natural Sciences and Engineering Research Council of Canada, the New Brunswick Innovation Foundation, and Genome Canada, and many potato growers and potato production and processing companies are collaborating on the research.