New varieties are in the pipeline – with a fresh focus on industry requirements. 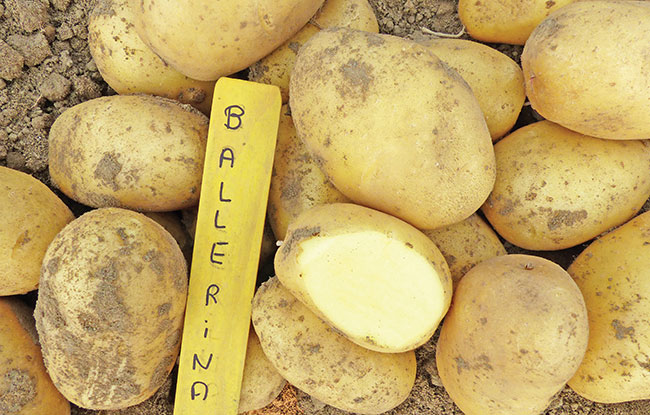 Ballerina has high yield, high tolerance to common scab and it did not show second growth in 2020, a hot summer in Ontario. Photo courtesy of Eugenia Banks.

Potato variety development takes a long time. In Canada, it typically takes six years before seedlings from crosses made at Agriculture and Agri-Food Canada’s breeding program in Fredericton and Lethbridge make it to national variety trials, and two to four – or more – years after that before candidates complete agronomic trials around the country.

Here’s how it starts: AAFC’s potato breeder David De Koeyer plans a crossing block with approximately 100 parents each year and technicians make 200 to 300 crosses between two parents. Every year, 60,000 seedlings are grown in the greenhouses to produce tubers for planting at breeding stations in New Brunswick and Alberta. Selection begins at harvest and only the best progeny advance for further evaluation the next year, explains Erica Fava, the potato breeding program biologist at AAFC Fredericton who works closely with De Koeyer.

Once the breeding cycle reaches its fifth or sixth year, the remaining selections are sent to P.E.I., New Brunswick, Quebec, Manitoba, Saskatchewan, Alberta and British Columbia to measure regional performance.

The University of Guelph’s potato research program, which collaborates closely with AAFC on field trials, receives material earlier in the cycle – from the third year; this year, an industry collaborator in Manitoba also received third-year material.

Traditionally, the potato research station in Fredericton has released between 10 and 15 new selections per year, which were then offered to industry bids for private field performance and quality evaluation trials.

But Fava says AAFC has adopted a new model for potato variety development that takes industry feedback into consideration from the very beginning and streamlines the process.

“We really have come to realize that we don’t know it all and we need industry to tell us what is important to them and what they think will be important 10 to 15 years from now,” she says.

“In the past, we put out about 15 selections each year. We’re not doing that anymore. We’re breeding to more defined targets and putting out the highest quality selections. We get industry input as to what they’re liking and that feedback informs the next decisions,” she explains. “With each year, with all the improvements we’re making, better selections will become available.”

The material that’s currently in the pipeline, she says, will be used to try out and refine new breeding methods. But Fava says the biggest gains will be seen in a few years, when De Koeyer’s first crosses begin to be released and the program starts to use innovations such as genomic prediction methods.

The AAFC team hopes to collaborate more closely with private breeders for the fresh, chip and fry markets, but will focus roughly 70 per cent of its efforts on French fry selections, and the remaining 30 per cent on fresh and chip selections, Fava says.

“We were spread too thin trying to serve all the different markets,” she explains. Most of Canada’s private breeders work on development selections for the fresh market and chips, and AAFC can continue to contribute breeding material, techniques and information to those programs while focusing on fries.

“The reality is, the largest portion of Canadian acreage is dedicated to fries, and we need new varieties to be adopted that will allow growers and processors to make gains in environmental stewardship and food waste reduction,” Fava says.

AAFC’s collaborations aren’t confined to one part of the industry. Fava’s program works closely with research programs across the country, as well as end-user groups and growers, and tries to keep its finger on the pulse of where the industry is headed, so it can develop potatoes that will meet needs a decade – or three – into the future.

What makes the cut?
What qualities make the cut during the selection process?

Fava says basic agronomic qualities – such as yield and disease tolerance in a range of environments – have always been baseline requirements.

Drought tolerance is rising in importance, she adds. “We’re seeing more extreme weather events and the industry is saying they need varieties that perform well under drought.”

Growers are also looking for qualities that will make production more sustainable, so Fava’s program is incorporating new techniques developed by other AAFC science teams early in the breeding process to find parents that will have resistance to viruses like Potato Virus X and Potato Virus Y, as well as diseases like common scab and late blight.

In Ontario, University of Guelph researcher Vanessa Currie makes selections from the material Fava’s program sends based on how it performs in the region. Those that make the cut are flagged for Fava’s program so that they’ll continue trials in both provinces, even if they perform relatively poorly in the conditions of Atlantic Canada.

“One of the things you first look for is uniformity of size and shape,” Currie explains. “You want them to be free from obvious defects and blemishes like scab. They need to be attractive. You also want there to be an abundant yield. When we’re doing those early generation selections, those are some of the things we’re looking for.”

In subsequent trial years Currie and her team becomes even more critical: they look at yield, processing quality and storability. “We’ll also do culinary tests, measure specific gravity, make notes about internal and external defects, and look at maturity and disease tolerance,” she says.

Currie says what the market demands in a potato is a “moving target,” but generally requirements are becoming more stringent over time.

“The potatoes people might see in the grocery store 25 years ago would not be acceptable today,” she says.

One example is creamers: 20 years ago, there was no market for small, round potatoes, but breeders now look for them during selections.

A significant emphasis in the selections process is finding potatoes that will supply the Canadian market during the early summer, when supply from the fall has been exhausted and the new crop hasn’t yet been harvested.

“There’s a period of about six weeks where potatoes are imported,” Currie says. “We’re trying to close that gap, and to do so there’s a two-pronged approach – finding potatoes that store as long as possible, and finding chipping potatoes that mature earlier and can be available by the middle of July.”

Eugenia Banks co-ordinates the Ontario Potato Board’s on-farm trials and has evaluated varieties for breeders across Canada and the U.S., as well as European breeders looking at Canadian distribution. She says that finding varieties that will grow well in different regions is key.

“Growers usually say they want to see how the varieties grow in their own backyard. I absolutely agree with them. I have seen varieties that perform very well in one area but have a poor performance in nearby areas,” she says.

The main factors that cause differences in performance, she says, include soil type and organic matter content, prevailing day/night temperatures, and rainfall or irrigation availability.

French fry processors look for potatoes that are long and blocky, high dry matter for a crisp texture after frying, low reducing sugars for light fries, and long dormancy.

Chip processors look for round tubers with high dry matter, low reducing sugars, long dormancy and no sticky stolons, so tubers can come off the vine easily when dug, Banks says.

She says new varieties can be game-changers that shift the market. But she cautions that growers interested in trying new varieties should start small to ensure the variety is a good fit for their growing region and farm.

“Start small with any new variety – there are always surprises when scaling up,” she says.

The project is funded through the Canadian Agricultural Partnership (the Partnership), a five-year federal-provincial-
territorial initiative. 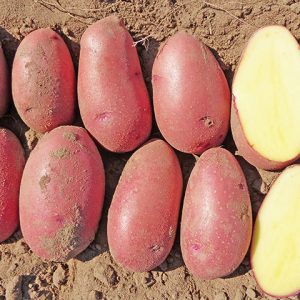 Merlot was developed in Germany and boasts an oval shape and red skin with medium to dark yellow flesh and shallow eyes.

In its first year of evaluation in Ontario, Reveille Russet showed early maturity and fast emergence. It has tolerance to common scab and white flesh. Photos courtesy of Eugenia Banks. 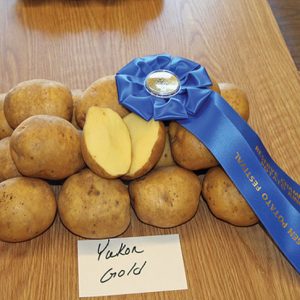 The well-known Yukon Gold potato, bred by Gary Johnston through the University of Guelph’s potato research program in the 1960s.

New and promising varieties
Eugenia Banks, the on-farm trial co-ordinator for the Ontario Potato Board, has her eye on three new varieties that look promising for Ontario growing conditions.

Ballerina is a yellow-fleshed variety that has not previously been evaluated in Ontario. Ballerina performed well in Waterdown and Alliston-Beeton. Ballerina has high yield, high tolerance to common scab and it did not show second growth in 2020, a hot summer in Ontario. “It has even set, negligible culls, cooks well and is very tasty,” she says.

Reveille Russet is a russet developed in Texas. In its first year of evaluation in Ontario it showed early maturity and fast emergence. It has tolerance to common scab and white flesh. No hollow heart or second growth was detected. The variety is promising for the Ontario fresh market.

Merlot was developed in Germany and boasts an oval shape and red skin with medium to dark yellow flesh and shallow eyes. The variety, which is in its second year of evaluation in Ontario, should be grown in scab-free soil. It can be harvested early, before reaching maturity, for the baby potato gourmet market. Banks says it has excellent culinary traits and is very tasty.

AAC Burcadie is a long selection with tan skin, pink eyes and cream flesh. Erica Fava, potato breeding program biologist at AAFC Fredericton, says Sinonies Enterprise Inc. has the world license to this dual-purpose (French fry and fresh market) variety, and they are taking it to West Africa for commercialization.

Sinonies Enterprises Inc. also has the North American and world licenses for the fresh market variety AAC Africadie. It is a round selection with smooth red skin and cream flesh. It had high yields across all of the national potato variety trial sites, is resistant to PVY and has some resistance to Verticillium albo-atrum.

Fava says Parkland Potato Varieties Ltd. is in the process of naming an exciting new fresh market variety provisionally called AR2018-11. The company is excited to have this high-yielding, red creamer variety in their portfolio. It has a very uniform round shape with red skin and cream flesh. It matures early and has moderate resistance to common scab.

Parkland is also in the process of naming AR2018-15, another fresh market variety. This round, purple-skinned and -fleshed variety is the first purple variety in their collection. It is a high yielding, mid-season variety with a uniform size and shape. Preliminary studies have also shown moderate resistance to foliar late blight and common scab, Fava says.