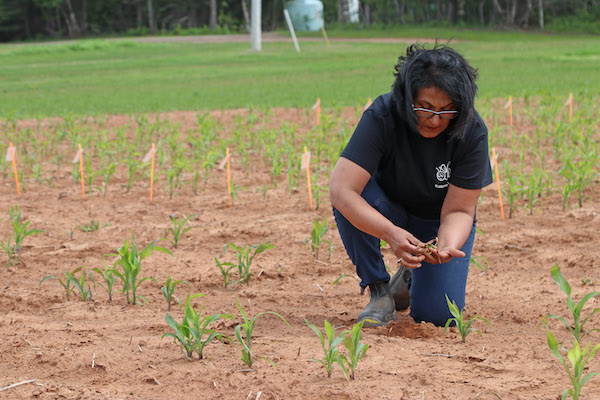 They live in soil, feed on roots, stunt plant growth and ruin crops. Wireworms, like cockroaches, are notoriously difficult to control, and their populations are increasing in farm fields across Canada. These pests, which are the larval stage of click beetles, are a common potato, corn and cereal crop pest.

For many years, farmers have struggled with limited options to control wireworms, leading to crop damage and loss. Now, thanks to support efforts from three Agriculture and Agri-Food Canada (AAFC) research scientists, farmers have a new wireworm defence in their arsenal.

In October 2020, Health Canada’s Pest Management Regulatory Agency (PMRA) approved the registration of broflanilide, the active ingredient in two new insecticides developed by BASF Canada Agricultural Solutions. Launched in January 2021, Teraxxa F4 is an insecticide-coated seed treatment that targets wireworms in cereal crops, such as wheat, and Cimegra is a liquid soil-level spray for potato and corn crops.

BASF has had long-running and successful partnerships with AAFC research scientists to support the research and development for new insecticide products. For the past eight years, three AAFC scientists – Christine Noronha in Charlottetown, P.E.I., Bob Vernon and Wim Van Herk in Agassiz, B.C. – have worked with BASF in the testing and research data collection for Teraxxa F4 and Cimegra. Their research is funded by BASF in partnership with the Government of Canada’s Horticulture Cluster under the Canadian Agricultural Partnership (CAP). CAP is a five-year, $3 billion investment by federal, provincial and territorial governments to strengthen the agriculture and agri-food sector.

The AAFC researchers have been assessing the performance of broflanilide on cereal and potato crops at the Harrington Research Farm in P.E.I., the Agassiz Research Farm in B.C., and with local farmers. Their research consisted of observing wireworm populations and wireworm damage to various potato and wheat varieties following different application rates of broflanilide, as well as wireworm populations after harvesting these crops. What they discovered was very promising.

Since the early 1990s, Vernon and Noronha have been testing the effectiveness of different insecticides from a variety of companies, and were both excited to find that broflanilide worked extremely well in eliminating wireworm populations in wheat and potatoes.

“To have been a part of the team of scientists that will help introduce these highly effective insecticides to farmers is an exciting accomplishment,” Noronha says.

“This has been the culmination of 20 years of research, and I can’t wait to see how Cimegra and Teraxxa F4 will help potato and cereal farmers in the future.”

“To have been a part of the team of scientists that will help introduce these highly effective insecticides to farmers is an exciting accomplishment.”

“What makes these new products exciting to farmers is that they effectively kill wireworms rather than other insecticides, such as the neonicotinoids, which just paralyze them, and it does so with low application rates, which makes this a safer option for the environment,” Van Herk says.

The years of data and expertise that Noronha, Van Herk, and Vernon shared with BASF has been vital in the development and recent registration of these two new products. According to BASF, the research team provided an invaluable conduit to connect with experts across the country who helped them understand the biology of the pest, identify and map the different pest species across the country and develop a solution that would be able to control the pest, no matter where the farmers lived.

“BASF is incredibly appreciative of the work by Dr. Bob Vernon, Dr. Wim van Herk, and Dr. Christine Noronha in the development of broflanilide. Simply put, their contributions were integral in helping us create a robust solution to help Canadian cereal and potato farmers contend with the significant challenge of wireworm control,” says Wayne Barton, manager of research and commercial development with BASF Canada Agricultural Solutions.

“This will finally give farmers a very effective tool in their integrated pest management toolbox. Our lab has focused on trying to identify such a tool since 1995, so this development is extremely rewarding for myself, AAFC, BASF and hopefully Canadian farmers.”

“This will finally give farmers a very effective tool in their integrated pest management toolbox,” Van Herk says. “Our lab has focused on trying to identify such a tool since 1995, so this development is extremely rewarding for myself, Dr. Vernon, Dr. Noronha, BASF and hopefully Canadian farmers.”