December 15, 2020
By Agriculture and Agri-Food Canada

December 15, 2020By Agriculture and Agri-Food Canada

No potato producer wants to find deep, rough and pitted lesions on the skin of their potatoes. Common scab is a widespread disease issue that can lead to major economic losses – at least $17 million per year – for producers across Canada. Lost profits from waste occur when more than five per cent of a potato is affected by common scab, which means they cannot be sold to the fresh vegetable market. Also, the lesions make potatoes difficult to peel, resulting in waste and lost profits in the chip and fry markets. Many regions are experiencing warmer and drier growing seasons, which leads to more instances of common scab in potatoes. 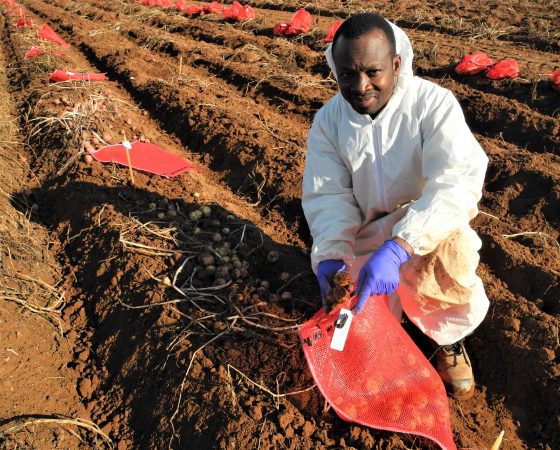 Fofana is working to develop potato varieties that are resistant to common scab, making crops more plentiful and profitable, and providing blemish-free produce for consumers around the world through the country’s first-ever Food Policy for Canada, announced in July 2019. Additionally, the Surplus Food Rescue Program is helping to manage and redirect existing potato surpluses to organizations that address food insecurity among Canadians to ensure that these potatoes are not wasted.

Fofana’s research team identified a set of 273 different genes in 34 biochemical pathways (a series of connected biological reactions that support one another) that likely differentiate Green Mountain and Hindenburg potato varieties and that might be responsible for common scab resistance in some potato varieties.

“The research revealed that the common scab-resistant variety, Hindenburg, has developed an ability to sense and prepare itself against common scab disease attacks over time as an immune priming mechanism,” Fofana explains.

He is hopeful that, with additional research, this new information could help Canadian potato breeding programs, including the breeders at AAFC’s Fredericton Research and Development Centre in New Brunswick.

The identification of the precise genes that affect common scab resistance will have a significant impact on potato breeding and ultimately will provide producers with a way to control this major disease, resulting in less waste and increased profits.