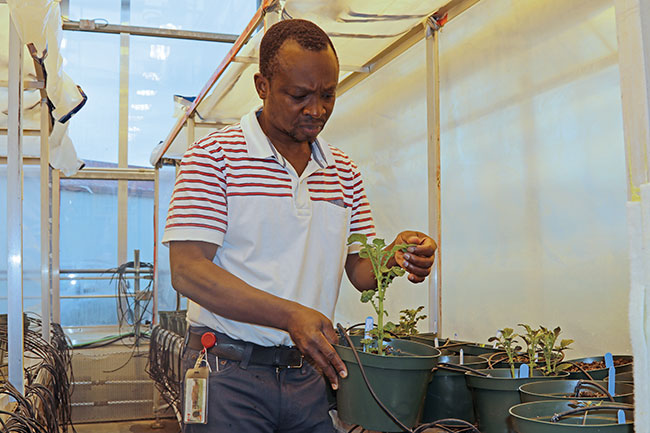 Lurking in the majority of fields across Canada is a disfiguring disease that affects potatoes and root vegetables: common scab.

Common scab is a bacterial disease caused by the soil-borne bacteria Streptomyces scabies, which can live in the soil for decades; once established, it’s very difficult to get rid of the disease in a field. Common scab can also be spread through spore-infected tubers and seed potatoes. It causes rough, scabby blemishes on the skin of potatoes, which can be raised or corky and sunken into the skin.

The disease is prevalent across Canada and can lead to major economic losses – at least $17 million per year – for producers. While potatoes infected with common scab are still edible if peeled, the blemishes have a significant, negative impact on marketability: they spoil the appearance of potatoes for the fresh market and make the tubers difficult to process. Common scab also makes stored potatoes more susceptible to diseases like soft rot, which will completely decay the potato.

So, what can producers do to combat the disease?

Fofana outlines some cultural management practices which can assist in managing common scab in a field. The first step? Try not to bring it into your field.

“The key point is to basically use certified, scab-free potato seed first,” he says. “The disease can build up year after year, [so] second, managing your soil [is important] because, even if you have certified [scab-free] seed, if your fields already have some scab problems you need to manage them to reduce the incidence.”

According to Fofana, common scab prefers a basic environment; keeping fields at a pH level of 5.8 to 6 is ideal for managing the disease.

He also suggests irrigation as a way of reducing scab infection, as dry conditions at the tuber initiation stage increase the likelihood of infection. However, irrigation is not economical or realistic for many producers outside of the Prairies, where the infrastructure is more necessary and better developed. The warmer, drier weather that many regions have experienced in recent years also presents a greater challenge in keeping soil adequately moist.

Another strategy Fofana has seen used in managing common scab is fumigation. “Those [chemicals] have a negative effect on the microbiome in your soil, but fumigation has been used before,” he says. “But this method has a really variable outcome.”

Fofana was quick to say that his area of research didn’t encompass crop rotation, but he pointed out that he hadn’t seen any research papers that conclusively demonstrated crop rotation had removed common scab disease loads from the soil.

Andy Robinson, a potato extension agronomist with North Dakota State University, notes on the university’s extension website that “utilizing a disease suppressive rotation with green manures, such as buckwheat, canola, oat, rye or millet, can inhibit Streptomyces scabies.” However, cover crops can be very dependent on geographical region, so these crops may not have disease-suppressing properties in all cases.

Even with all these strategies combined, Fofana notes that incidence of common scab in potatoes is still quite high. Currently, there are no methods that provide complete and consistent control. So, a long-term solution would be ideal – which is where Fofana’s research comes in.

In the genes
Since 2017, Fofana has worked on figuring out how to find scab resistance genes, with the intent of using the genes to breed better scab-resistant varieties through gene editing. The research’s starting point looked for statistically significant differences in gene expression between two potato varieties as the research’s controls in the lab and field: Hindenburg, a variety with strong scab resistance, and Green Mountain, which often develops common scab and shows little resistance.

Comparative gene expression profiling – the method Fofana is using – is the measurement of the activity, or expression, of thousands of genes at once. These gene activities are then compared between two organisms – in this case, two potato varieties.

“We have done some RNA expression analysis – we call that transcriptomic – and we now have data on what genes differentiate a resistant cultivar from the susceptible Green Mountain, and what are the genes that prompt the resistant [cultivar] to respond to scab,” Fofana says.

“But we really want to go further to understand better. [We] have a transcriptome – a group of genes – but we want to narrow that down. Last summer (2021), we wanted to confirm exactly what genes are associated with scab resistance.”

This involved testing 384 potato clones, this time using Green Mountain and Shepody, which Fofana refers to as a very good cultivar which is also very susceptible to common scab, in the trial. Last fall, the lines were evaluated for a scab rating – susceptible or resistant.

“We also sequenced all 384 clones by next-gen sequencing to see how each clone differs, one to another, based on genetic composition,” Fofana says.

“So, we have all this information, and we merged the scab phenotypic data with plant genetic data” for purposes of genetic mapping.

“By doing that, we are trying to find out what genetic regions of potatoes that are associated with resistance to scab. We know there are some chromosomal regions which are associated with scab; we are now in the process of comparing this data with what we knew before to narrow down, very, very closely, regions of interest.”

Next steps
“The next steps – where we are right now – is to take some of the clones we have found as resistant in this trial and transfer that to our breeding program to do some crosses,” Fofana says. “This is one option we are taking. But the genes we’ve identified, we will use that in gene editing.

“We know that Shepody, for example, is very susceptible; how can we use the gene that we identify in Shepody and make a little change there? Because resistance can occur by just changing one letter [in the DNA code] through CRISPR gene editing.”

Fofana says that the current research will lead to a new, connected project, so his pursuit of common scab resistance genes and gene editing techniques will continue.

As for other projects he believes would be beneficial to managing common scab, Fofana notes the importance of having an up-to-date understanding of the disease’s presence in Canada.

“Something I think needs to be done at some point is a map of [common scab] incidence [in Canada],” Fofana says. “The last survey that I know of was conducted back in 2003 – almost 19 years ago now. At that time, based on that survey, 82 per cent of the fields across the country had scab problems.

“That number will not be going down, so what is the current state of scab incidence across the country?”