Scientists are looking to build foundational research on this tiny pest with an enormous impact. 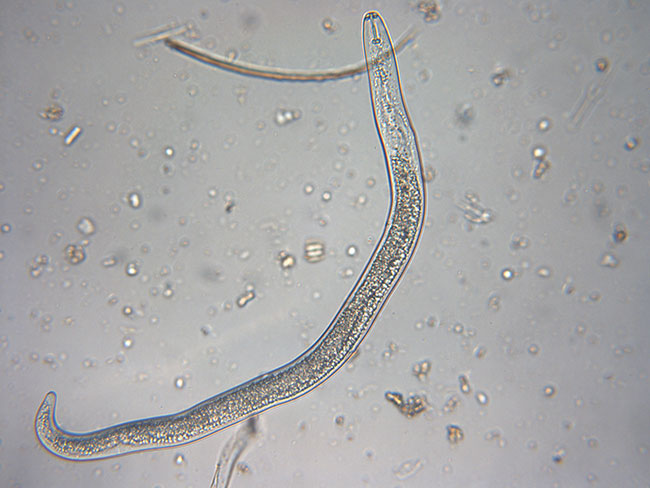 A juvenile root lesion nematode of the species Pratylenchus neglectus recovered from a potato field in Manitoba. Photo courtesy of Mario Tenuta.

Root lesion nematode is a tiny pest, about one millimetre in length. But it has an outsized ability to damage potatoes in Canada. The reason? It’s part of a complex of pests that causes Potato Early Dying (PED) disease, which is responsible for major economic losses of potato in Canada each year.

The Canadian Potato Early Dying Network (CanPEDNet) is a program comprising 12 different research projects aimed at reducing the incidence and effects of Potato Early Dying disease in Canada. The program, which began in late fall 2019, is run through the Horticulture 3 Cluster of projects in the Canadian Agriculture Partnership AgriScience Program led by the Canadian Horticultural Council, with support from a long list of industry collaborators. Several projects are focused on identifying and managing the species of pests responsible for PED.

At the top of the list is Verticillium wilt, a serious fungal disease caused by the pathogen Verticillium dahliae – as well as at least one species of root lesion nematode.

More is currently known about the former than the latter, mainly because a nematode problem is difficult to diagnose on its own.

Dr. Mario Tenuta is a professor in the department of soil science at the University of Manitoba, and the principal investigator of CanPEDNet.

“When we think about PED, we often think of it as a ‘complex,’ because yes, you can have one pathogen issue – primarily it’s V. dahliae – but in other places, like Ontario and the Maritimes, you have both the Verticillium and the root lesion nematode. And when the two are combined [in a field], you have severe disease,” Tenuta says.

Tenuta notes root lesion nematodes feed on potatoes by poking tiny holes in the roots, entering them and feeding on cells inside. Eventually, they leave the root and lay eggs either inside or outside the root in the soil.

High levels of nematode damage look like an “unhealthy root system,” he says, with stunted growth, chlorosis of the plant and increased vulnerability to drought. Nematode damage can be visible as discolouration of the roots, he says, and lesions can develop on thicker roots.

Wounds caused by nematodes can allow pathogens to gain entry to the plant, compounding its problems.

There are many species of root lesion nematodes in Canada, but one species in particular is known to cause problems for potato growers: Pratylenchus penetrans.

“With potatoes, this particular species interacts with V. dahliae to aggravate PED,” Tenuta explains. “In other words, the damage by V. dahliae is magnified, and you don’t really need too many of the nematodes in the roots to cause problems.”

P. penetrans has not been found outside Eastern Canada or British Columbia – yet. Another species of nematode, Pratylenchus neglectus, is commonly found in the Prairies, and can be a problem in canola and wheat, Tenuta says. But it’s not yet known whether P. neglectus is problematic in potatoes.

Tenuta says Canada is “far behind” in its comprehension of nematode problems. “We need foundational work done – which species are there, where they are, and their levels. That’s a critical first step here,” he says.

CanPEDNet is taking that step. Dr. Benjamin Mimee is a nematologist with Agriculture and Agri-Food Canada at Saint-Jean-sur-Richelieu Research and Development Centre in Quebec. He’s leading efforts to sequence nematodes found in soil samples collected across Canada in order to identify which species might interact with V. dahliae to show synergistic effects in potato.

“Currently we’ve tested more than 2,500 nematodes,” Mimee says. “We’ve identified them under the microscope and by sequencing. After that, we are raising colonies of isolates from each province and each species; we’ll test their pathogenicity over the winter.

“Among the isolates that are identified, we know there are huge genetic differences, and that two species of nematode have different genomes. We’ll look at how they interact with Verticillium and test whether their interactions with Verticillium are different. We want to know which species [and subspecies for P. penetrans] are pathogenic for potatoes and capture the real damage potential that’s present in each field.”

Mimee says the key for growers’ ability to manage PED will be species identification. Species can be mixed in a field, or fields can have just one species, but even if there are high levels of a species in a field, unless that species is P. penetrans, producers may not have a problem at all.

In Alberta, Dr. Dmytro Yevtushenko, an associate professor and research chair in the Potato Research Laboratory at the University of Lethbridge, is also working on nematode species identification as part of CanPEDNet.

“The ultimate goal for Alberta is to establish the threshold levels of Verticillium and nematodes that affect yield,” he says – hopefully by the study’s end in late 2022.

“PED is one of the most important diseases in Canada. It’s probably more severe in Eastern Canada, but still present in Western Canada. But in contrast to Eastern Canada, we still have a very mixed picture of PED – we’re not even sure of the causative agents,” he says.

“We suspect [the causative agents of PED in Western Canada] could be different from those in Eastern Canada.”

Yevtushenko’s lab has processed tissue samples from across the province and confirmed widespread presence of V. dahliae, even in fields with low PED. They haven’t found any P. penetrans, he says, although P. neglectus is present. His lab is hoping to figure out whether the latter is responsible for economic damage.

In January, they’ll set up a real-time PCR system to begin assessing soil and plant samples in-house for the presence of Verticillium as well as other phytopathogens. Producers should have quick turnaround of test results, he says.

Species identification via soil testing will be the cornerstone of management when it comes to PED, Tenuta says. Right now, that’s a bit of a problem for some producers.

The first question to answer is whether the producer has P. penetrans in a field. “If they do, they should be concerned,” he says. “If they have other species than P. penetrans, now it’s a question of the levels. They need to be really high for producers to get concerned.”

Soil testing is the “best means” for producers to understand what’s afflicting their fields, he says. But not all testing is alike. “You can get root lesion analysis. You have to be careful and ask for the P. penetrans determination and make sure you have confidence that the lab can do a good job of that determination,” he cautions. “Different species look very much alike, so it’s best if there’s a molecular PCR diagnostic.”

Once the presence of this species has been confirmed, producers have the option of using a nematicide, but these are not 100 per cent effective and “aren’t the best option from a soil ecology standpoint,” Tenuta says.

The best option is to take a cultural management approach, although many crops can play host to nematodes and thus can’t be used to break up pest cycles. Producers can use “trap crops” such as sudangrass or forage pearl millet, but should carefully research what to plant as rotational crops, as Brassicas, corn and even forage legumes can be hosts for nematodes. The best option, Tenuta says, is often cereals.

As CanPEDNet projects progress, producers should stay tuned for results.

“Over the next year and a bit, we’ll have a lot of information and knowledge coming out about these species,” he says.