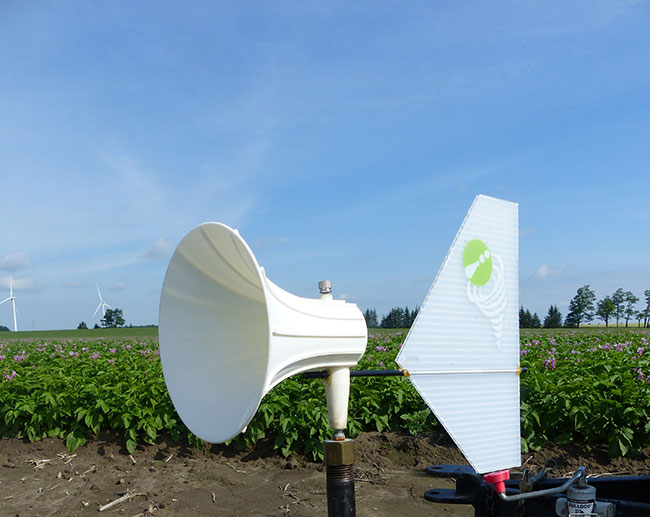 Spore traps, shown here in Shelburne, Ont., have become a way for the Ontario Potato Board to predict late blight pressure. Photo courtesy of Eugenia Banks.

By the time growers see the effects of late blight in a potato field, enough damage could have occurred to reduce profitability. Some producers take a “just because I can’t see it, doesn’t mean it isn’t there” approach and use a spray mitigation program in anticipation of late blight showing up in a field. But this strategy costs time and money. What if you could predict that late blight will be a problem before it can be seen?

Banks collects the filters from her traps twice a week and sends them for a PCR test. As soon as the results are returned to her, she emails a report to growers. “I tell them the location of the traps and which ones had spores and where late blight might develop,” Banks explains. “I send the results regularly and some growers say they wouldn’t farm without the information they can get from the spore traps. Fungicides are expensive, so it makes sense to use spore traps to prevent spraying indiscriminately for late blight.”

Banks has been monitoring late blight occurrence with spore traps for six years and she says the low-tech monitoring system is cost effective. She estimates $2,000 pays for 12 weeks of monitoring. Besides purchasing the traps, the price includes filters and the PCR tests. The next cost is the time it takes to remove and replace the filters and immediately send the exposed filter for testing.

Banks believes the cost is easily recouped when the traps indicate there is no threat and spraying isn’t required. Potatoes are also saved when a prediction of late blight pressure guides growers to timely applications of fungicide before late blight can adversely affect the crop.

Results from P.E.I.
The Prince Edward Island Potato Board began using spore traps a few years ago with similar good results. In 2021, the third year of the program, the Board organized a province-wide sport trap reporting program, including using the same sport traps and PCR testing as Ontario. According to Ryan Barrett, the Board’s research and agronomy specialist, the system helps growers make timely decisions.

“If blight is detected in a certain area, it provides growers with that information, in order to inform whether they need to tighten spray intervals or change their fungicide choices,” Barrett explains. “If no late blight is detected and conditions are not favourable to blight infection, [the tool] provides growers with information to look at lengthening spray schedules or skipping a spray. This reduces the amount of pesticides used, and saves the farm considerable amounts of money.”

Late blight has not been detected in P.E.I. for a number of years, according to Barrett. However, if late blight is found, it could severely impact the crop. “By using the results of spore trapping services as well as weather-based decision tools, a number of PEI producers have been able to reduce the number of fungicide applications per season without increasing the risk of late blight infection,” he says. “This is both great for the environment, [and] great for the producer.”

Growers with multiple fields of potatoes, or who are not in proximity to potato board-sponsored spore trap technology can manage the low-tech system themselves. Or, they can engage companies, such as Spornado and AIR Program, which offer the service on contract and will send regular updates to the grower. Some offer more than just late blight monitoring and include information on weather and other pathogens.

“Spore traps are another tool to combat late blight,” Banks explains. The fact that the tool is inexpensive and uses only wind energy to operate non-stop throughout the growing season, also benefits the environment, she adds.

Work done by provincial potato boards in Ontario and P.E.I. prove this low-tech technology is worth its hundredweight in giving growers information on whether to ramp up late blight control or to save money by reducing fungicide when late blight is not present in the field.

The laboratory results will give growers the information to determine if control is needed and how soon to start. Banks suggests tank-mixing a late blight-specific fungicide with a broad-spectrum fungicide, which will minimize late blight pressure and control other pathogens in the field.