Features Business & Policy Technology
It’s something in the water

Managing resources is becoming more and more important as reserves diminish around the world. Meanwhile, agriculture is expected to feed a population of nine billion by 2015 using those diminishing resources. Identifying tools that help manage resources in a cost-effective and constructive way is equally challenging. A water management system introduced to Canada a couple of years ago is proving to be a successful way to use the resource more effectively even though research has been sporadic to prove how or why it works.

The Omni Enviro Water System claims to improve crops using magnetized water and anecdotal evidence is showing the company’s claims are valid. Based on the principles of molecular physics that say water molecules will bond together creating clusters that are too large to be absorbed by plant cells, the Omni Enviro system breaks up the clusters using magnetic fields and makes them smaller and more easily absorbed by the soil and the plant.

“It certainly does something, but I can’t say how,” admits Wayne Baerg, a crop consultant from Winkler, Man., who suggested three of his clients try the system in irrigation systems for potatoes or in a sprayer. “I did talk to growers in the United States before I recommended it.” Now that he has seen the system work over a couple years, Baerg says he would suggest growers try it, but they will have to determine whether it is cost effective for their operation.

The system requires a magnetic unit be installed on the water line and, according to Garry Fenton, the Canadian president of Omni Enviro, the magnetic field breaks down the water molecule clusters that will then permeate the soil better. “We have typically seen a minimum of 10 per cent improvement in water usage,” Fenton says. “The plants become more hydrated, hard water is broken down to micronutrients more available to the crop, which cuts down on the need to add micronutrients in the fertility program and, ultimately, it will improve the condition of the soil.”

Baerg says he saw an improvement in the soil at one client’s farm. Faced with high salinity, the grower decided to try Omni Enviro on his irrigation pivot. The grower left a wedge-shaped check in the pivot’s revolution and Baerg says the difference in the soil quality was measurable.

“We also found the crop didn’t use as much water with this system,” Baerg continues, “which can be a cost saving. In fact, you may need to learn to use less water.”

Another of Baerg’s clients used a two-inch-diameter Omni Enviro unit on a sprayer and discovered that his herbicides were more effective. The grower saw weeds controlled that were not on the herbicide’s label and those that were on the label had a higher control than normal. “It was dramatic,” admits Baerg. “The unit paid for itself more than once after one season of use in the reduction of chemical needed.”

“Using a unit on a sprayer cuts down on the amount of water needed,” Fenton adds. “We have also seen that treated seed has improved emergence and yield.”

Omni Enviro units are sold according to the diameter of the plumbing with the cost starting at $400. A sprayer may need a two-inch unit, while an irrigation pivot may require a six-inch or eight-inch unit. The units will fit any irrigation or spray system.

There is ongoing research on the value of using magnetic fields to improve water for crops, but much of it is being done in Europe. So far, there has not been much recently published research in North America. However, as Baerg reports, his clients who have used the system are seeing a difference and they believe in it without the empirical evidence to prove that what they are seeing makes scientific sense.

“We didn’t really see any significant yield improvements from using the units, but the improvement in the soil and the effectiveness of the herbicide application made a difference in the crop,” says Baerg.

After being impressed by what he saw in cornfields during a trip to Kansas, Fenton decided to introduce Omni Enviro to Canadian growers. “A corn farmer in Kansas with 10 irrigation pivots put a unit on his worst field and saw a yield increase of 34 bushels per acre.”

Vegetable growers across the United States have given testimonials to the value of using Omni Enviro, so it may be one of those tools that science has yet to fully explain. It could be similar to Grandpa complaining that his  lumbago acts up every time it rains: there is no scientific evidence to prove a connection, but who is going to argue with Grandpa? If Omni Enviro does, in fact, improve water usage, it could be another step towards successful management of a diminishing resource. 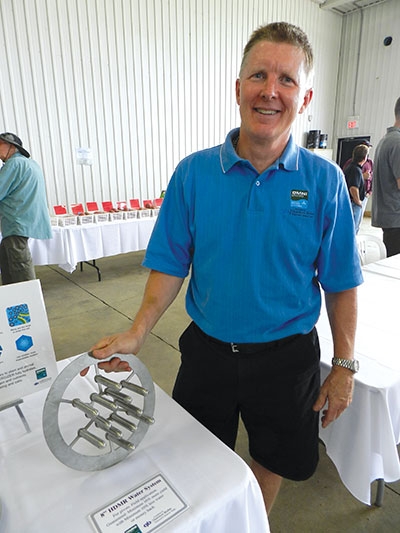 Gary Fenton holds a magnetic unit that would fit on an irrigation pivot. Managing resources is becoming more and more important as reserves diminish around the world.
Print this page