A number of Ontario potato growers began noticing moist grey and brown lesions around wounds and the stem ends in their harvested potatoes in the fall – the first signs of Pythium leak. Measures to minimize the potential problem were initiated because, if the crop isn’t managed carefully as it is placed into storage, a season of hard work can be lost. 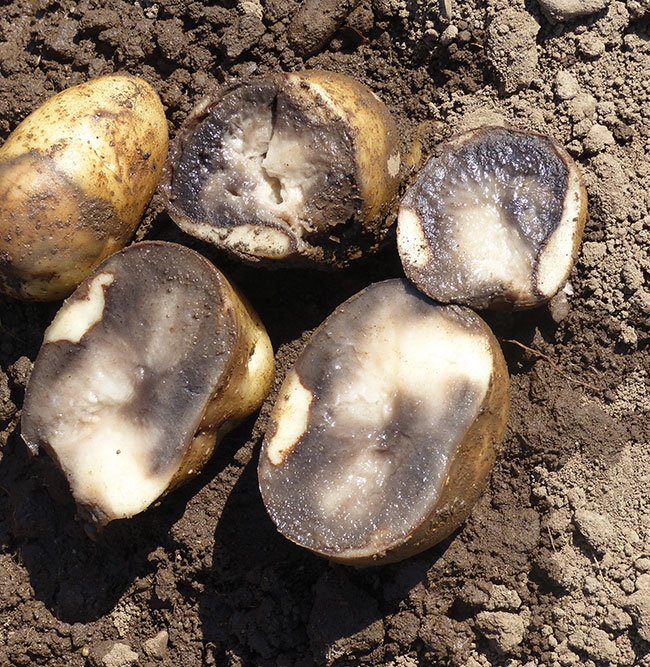 Pythium leak can manifest itself in any growing area if the conditions are right.

“When I think of Pythium leak, I think of how the disease affects the potatoes,” says Tracy Shinners-Carnelley, vice-president of research and quality at Peak of the Market in Winnipeg. “Storage infected with it will leak right out the doors.”

According to Ontario potato specialist Eugenia Banks, the Pythium fungus needs wounds or bruises in order to penetrate the tubers and, once infected, the crop will rot in transit or in storage. But the problem begins in the field.

Pythium leak is a fungal pathogen that can live in the soil on decaying organic matter for an indefinite period of time. In the field, it is unlikely to affect the tubers but, once harvest begins and damage from machinery occurs, the tubers will be under threat as small nicks and bruising from the harvesting process will leave them vulnerable to the pathogen. According to Banks, immature tubers harvested under warm, moist conditions and harvesting during hot weather or exposure of the tubers to heat after harvest favour disease development.

“Try to allow the crop to mature fully in the field prior to harvest so that skin set is achieved when the tubers are dug,” Banks advises. “Minimizing mechanical injury during harvest and post harvest, harvesting during cool conditions and keeping tubers out of the sun after harvest will all help reduce the risk of Pythium attacking the harvested crop.”

Banks adds there is little that can be done to control Pythium leak during the growing season. Applications of a mefanoxam product can help but it can be overcome if the damage becomes significant.

“Unfortunately, the phosphorus acid products, which seem to work so well for pink rot and late blight, are not nearly as effective on Pythium,” Banks says.

Minimizing the infection comes down to management of harvest and storage, but perfect harvest and storage conditions don’t happen often. Banks adds if potatoes must be harvested during warm conditions, try to cool them immediately and increase air circulation in storage to avoid high humidity.

Neil Gudmestad, a plant pathologist at North Dakota State University, concurs with Banks. He adds Pythium leak is a serious risk any time tuber pulp temperatures exceed 16 C, as the increase in respiration rate will further increase those temperatures to approximately 18 C – above which disease incidence and severity increases significantly.

Gudmestad also recommends maintaining and calibrating equipment to reduce the risk of damage during harvest. “The harvester needs to be well-timed to minimize wounds,” he urges. “Make sure the primary carries enough soil to cushion the tubers and avoid right angles on the conveyors going into storage to further minimize the chance of wounds.”

Grading helps reduce some risk of storing infected tubers, adds Shinners-Carnelley. “It’s never a good idea to put visibly damaged or decaying tubers in the bin, so grading can help. But some wounds may be small and the disease may not be visible yet.”

Once in storage, careful management is needed if Pythium leak was present in the field. Gudmestad recommends maintaining a relative humidity of less than 95 per cent, “preferably between 90 and 92 per cent,” in order to wick away the moisture that will leak from the tubers as they decay.

Shinners-Carnelley says growers walk a fine line when the crop is in storage to maintain quality while minimizing the increase of Pythium leak. “Reducing humidity can slow down disease development, but it can also increase the risk of shrink.”

“Growers pay the price for harvesting potatoes with pulp temperature above 18 C when the air temperature is above 27 C and humidity is high,” Banks notes. “Almost all the tuber diseases you find in storage are made worse by warmer temperatures. Adding to the problem is the fact that many of these diseases enter the tuber and actually start their infection cycle during activities associated with harvest that tend to cause tuber wounding.”

Finally, if there is a high risk of Pythium leak in storage, these experts recommend trying to ship that bin first to curtail the potential damage and salvage the healthy tubers in the pile.

Pythium leak is a messy, insidious disease that can go unnoticed if careful attention is not paid to the crop during harvest. If time is of the essence to get the crop harvested, but the best window of opportunity is still poor, take time to randomly check the tubers for Pythium as the crop goes into storage. Steps to reduce the potential for an entire bin to collapse in a runny mess can then be initiated if Pythium leak is identified.