Early harvest for potatoes continues in southwest Ontario, while crops in central Ontario are still blooming or going down, according to Eugenia Banks' potato update. 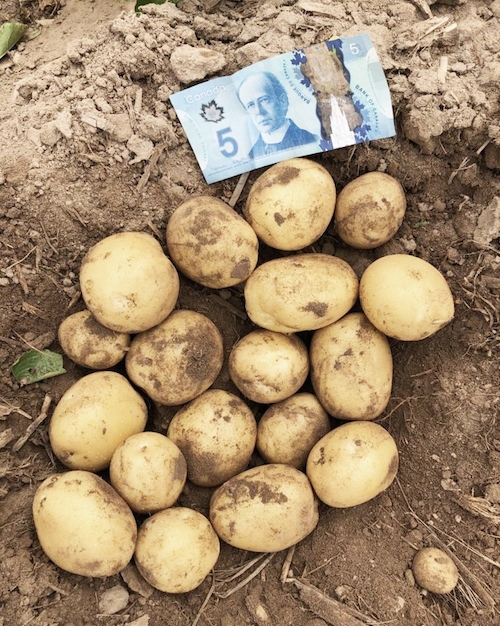 While the harvest has started, early potatoes, especially yellow, are in short supply. Fresh-market growers in the southwest region are commenting that yields from early plantings are low and disappointing.

At the end of July, black cutworms were found in a field in Delhi, Ont. Joe Lach, a grower in the area, says the black cutworm damage in reds is “the worst he’s ever seen.”

Verticillium has also been detected in a few fields that are past the bloom stage. Usually crops become more susceptible to early blight, brown spot, Verticillium and Fusarium wilt in fields that are, or will be, past bloom. Banks took a photo of a field where a section was not fumigated. The attached photo shows the area where the Verticillium took over, while the fumigated area is still green.

The neonicotinoids applied as seed treatments are wearing off around this time.

With the dry weather, irrigation is common in central Ontario for growers that can. At this stage, many varieties are bulking and Banks says a two-inch rain “would be more than welcome.” However, only hot weather is in the forecast for the weekend. Pepper spot can be expected to be more noticeable next week.

It might not last forever as parts of central Ontario are expecting thunderstorms early next week. The hot weather has been helping keep late blight in check and so far, all of the Ontario spore traps have reported no detection of late blight spores.