Growers across Canada are resigned to tackling late blight every year, and most follow strong management programs to ensure the potato’s oldest fungal nemesis doesn’t gain a foothold in their fields. However, research into late blight is ongoing: each year, the National Late Blight Working Group gathers and quantifies data on strains of late blight fungus in tubers from across the country. This information helps researchers keep abreast of changes in late blight pathogen populations, which in turn helps them make management recommendations to growers.

In 2013, the dominant strain present in growers’ fields across Canada was US-23, although results from the 2013 national late blight strain identification survey are still being tabulated, according to Khalil Al-Mughrabi, pathologist with the Potato Development Centre, New Brunswick Department of Agriculture, Aquaculture and Fisheries, and chairman of the National Late Blight Working Group.

The research team comprises Al-Mughrabi, Larry Kawchuk (Agriculture and Agri-Food Canada, Lethbridge, Alta.), Rick Peters (AAFC, Charlottetown, P.E.I.) and Fouad Daayf (University of Manitoba), along with their staff. Together, these researchers actively promote the survey, receive samples, purify the pathogen, and perform the required testing for strain identification and sensitivity to metalaxyl, the systemic phenylamide fungicide used where necessary to control late blight.

Each year, the survey results show changes in genotypes. Late blight pathogens are notoriously difficult to pin down, as the movement of new strains into Canada can happen via infected seed, tomato transplants and wind-blown spores, and the pathogen movement occurs within Canada as well, says Al-Mughrabi.

As an alternative to growing late blight susceptible tomato varieties, Al-Mughrabi and his team recommend planting late blight resistant varieties such as Mountain Magic and Defiant.

Al-Mughrabi advises that material infected with late blight should be left in the sun for a week, then bagged in black garbage bags and discarded. Additionally, the research team has offered to look at any backyard samples.

Management and control
While breeding for late blight resistance is promising, and work in this area is ongoing, growers must still employ a rigorous set of management practices in order to keep the disease in check.

Several fungicides are commonly used to control late blight, but growers’ options are changing. On Prince Edward Island, the fungicide mancozeb is up for re-evaluation by Health Canada’s Pest Management Regulatory Agency (PMRA), which means that its future as a control option may be limited.

But Al-Mughrabi says there are other chemical control options available to growers, including phosphite fungicides (Confine, Phostrol and Rampart). “In recent years, the benefits of phosphites as part of a comprehensive integrated pest management program, particularly to help with tuber blight management, have been promoted,” says Al-Mughrabi.

“Studies on the fungicides registered for late blight control in Canada are being conducted in order to assess their efficacy on the newly emerged strains of the pathogens, [but] the results have not been finalized yet,” he says.

Regardless of the late blight strain present in a particular region, however, Al-Mughrabi recommends a variety of management practices that can help growers manage late blight risk in their fields.

Key among these is prevention, in the form of planting disease-free seed. As soon as potato seed is delivered, growers should inspect the seed and cut samples to ensure there are no signs of late blight tuber rot.

Once the tubers have been cut prior to planting, any infected segments should be buried, and any abnormal plants either treated with a herbicide or discarded.

If any samples of suspected late blight are discovered, these should be immediately sent for analysis. “Strain characteristics such as sensitivity to fungicides, aggressiveness and host preference can impact control strategies,” says Al-Mughrabi. Incidences of late blight should also be reported to nearby agricultural centres or extension specialists.

Monitoring is also an important aspect of late blight control, says Al-Mughrabi. If late blight appears on the plant foliage, tuber infection is likely. Once late blight has been spotted in the field, the infected area should be top-killed or the plants removed. “Maintain vigilance in scouting your fields for late blight,” he says. “Scout early, scout often.” As well, fungicide application should always be done in accordance with label directions for maximum efficacy.

Two weeks prior to harvest, growers should top-kill the crop, which allows time for the diseased tubers to rot and the healthy tubers to harden. Potential problem areas such as sprayer rows and low areas should be harvested last and the tubers stored separately to prevent possible cross-contamination.

“Late blight is a ‘community disease’ that does not go away,” says Al-Mughrabi. “Inform the Department of Agriculture and your neighbours. Send samples for strain identification, and follow up with the extension specialist in your area on the latest information and recommendations for managing this disease.” 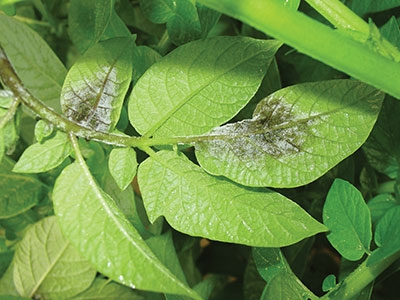 Related
No report of late blight in Manitoba
Fusarium resistance in potatoes
Potato wart found in P.E.I. field
Ahead of the curve on zebra chip
Tags