Features Diseases
The rise and fall of Blackleg-causing bacteria

United States scientists are seeing the decline of Dickeya dianthicola, but a rise in Pectobacterium. 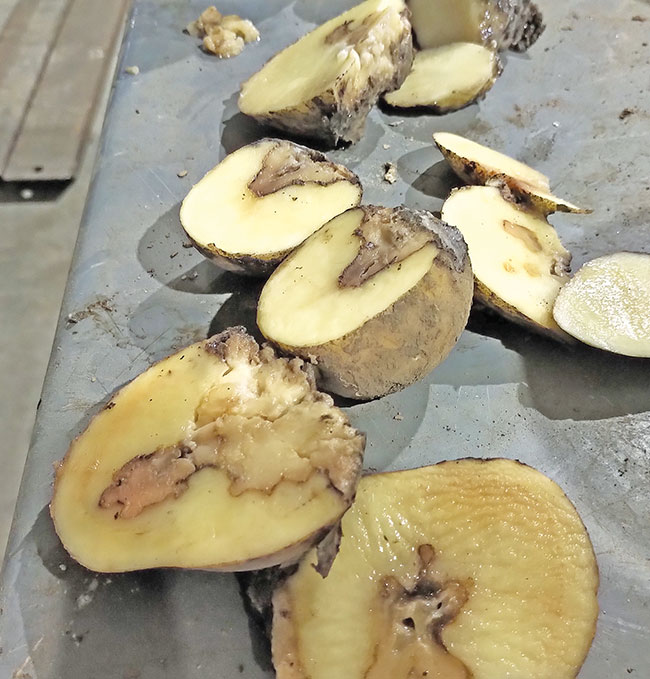 Blackleg confounds potato growers, especially since several bacteria can cause the yield-robbing scourge. Fortunately, one of the main culprits, Dickeya dianthicola, is not often found in Canada and tends to be localized when it is. However, other bacteria that can cause Blackleg infect fields regularly. The difficulty is knowing which bacteria is present in order to mitigate the problem effectively.

Research at the University of Maine, where Dickeya has been common, showed that growers who effectively control Blackleg caused by Dickeya are now seeing an increase in other Blackleg-causing bacteria. This has prompted them to issue a warning to growers to identify the bacteria as a means to better arrest the spread of Blackleg. Even though Canadian growers have ably controlled Dickeya-initiated infections, knowing the type of bacteria that is causing Blackleg is helpful for planning disease reduction.

“With the decline in Dickeya, we are seeing an increase in pathogens that never bothered potatoes before but are bothering them now,” says Dr. Steve Johnson, a disease specialist at University of Maine Co-operative Extension. “Pectobacterium parmentieri is a real problem now. Dickeya dianthicola and Pectobacterium parmentieri are often seen together and it can be difficult to separate their symptoms in the field.”

Johnson says proper identification of the bacteria causing the problem will allow growers to plan an effective control strategy. He adds that, when found together, Dickeya and Pectobacterium can cause more damage than when they appear singly in a crop.

It is possible that Pectobacterium will cause worse Blackleg infections than Dickeya ever did because the latter has a low genetic diversity. Pectobacterium, on the other hand, is “promiscuous,” according to Johnson, and frequently mutates.

In general, about four Pectobacterium species, including P. parmantieri, cause Blackleg. “Potato diseases caused by Pectobacterium do exist in Canada, but are not a major threat to the potato industry,” explains Dr. Sean Li of the Canadian Food Inspection Agency in Charlottetown. “The pathogens are not regulated in Canada or the United States as a quarantine pathogen.”

The recognition that another disease species will take over if a previously dominant bacteria declines will help growers plan and manage crops more effectively. Johnson and Li agree it all begins with seed. Planting disease-free seed coated with a seed piece treatment that minimizes infection will get the crop off to a good start. The important aspect of the process is to know which bacteria could be the potential problem. In the United States, growers managing for Dickeya managed to control it, but missed the rise of Pectobacterium because the resulting infection (Blackleg) looked the same. Concerns that the chosen control had failed were unfounded.

“We made changes in how we handled seed and Dickeya petered out,” Johnson explains. “But something else took its place.” If growers effectively control Pectobacterium, he hopes that whatever takes its place isn’t worse.

“Our diagnostic capabilities have improved and we can identify disease quicker,” Johnson adds. Quicker identification will help growers adjust their disease control strategy in any growing season.

Li suggests the changing environment may contribute to the movement of disease across potato-growing areas or even continents. “Along with environmental changes, different incidents may become a dominant cause while others are controlled,” he says. “For instance, in Europe, during the last fifteen to twenty years, Dickeya solani used to play a dominant role as the major causal agent for potato Blackleg. However, Pectobacterium Brasiliense has become the dominant causal agent for Blackleg in some potato production regions over the last few years.” 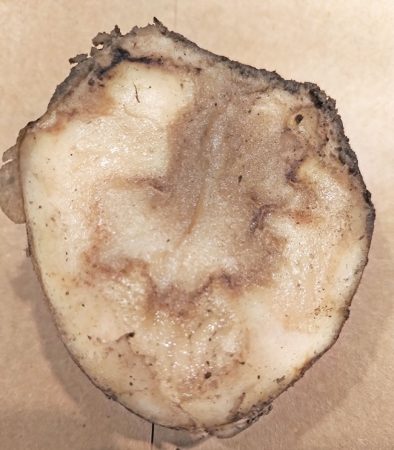 Growers must be on the looking for the different types of bacteria that can cause Blackleg.
Photo courtesy of Eugenia Banks.

For growers in all parts of Canada, it is time for a reality check to know what species of bacteria are in their fields. The results may look the same but the cause could be completely different, requiring another chemistry for effective control of Blackleg.

Without question, planting uninfected seed is one cure for the problem. Fortunately, Canada has a robust seed industry that does a good job of minimizing seed-borne pathogens, according to Bill Moons, an agronomist at Bayer Crop Science. He says seed growers are doing a good job of providing disease-free seed, but the next step is for growers to protect the cut seed. Using seed treatmeants, like Emesto Silver from Bayer, and holding the seed prior to planting, allows for the cut surface to suberize. This can reduce infection from soil-borne bacteria, he adds.

“No amount of good luck, good management, or good weather will make up for poor seed,” Moons says. “Long rotations are better to help some soil-borne diseases from becoming a big problem. But it’s not just the length of rotation – the type of rotation [will] minimize disease in the field.” He adds management of the potato crop has vastly changed in the last 20 years, as growers have intensified their management practices from seed to storage.

As the University of Maine research shows, potato growers cannot become complacent. Once they feel they have controlled a disease, another may take its place and they need to be ready. Testing a sample of Blackleg is a good defence that will indicate what pathogen is causing the infection. It turns out one Blackleg is not like another.

Even though Dickeya has not been a big problem in Canada and growers who have had it managed to control it effectively, Johnson’s research shows disease-causing bacteria in a field can change, and growers need to be prepared. He suggests managing seed from the beginning, which will help identify where the infection started. “If you get seed from two sources, separate them – even if it is just a stake pounded into the field where you changed seed lots.” This action would highlight where planting infected seed began if a problem is noted.

Johnson says potato growers are savvy and they can recognize problems in fields. “Especially with familiar varieties, because growers know what the crop should look like in the field, so they will notice changes,” he explains. “If a grower sees something wrong in the field, trust your instincts and ask for help.” Be prepared to see different pathogens in fields going forward, he advises.

Take time to prepare seed
The most effective way to minimize the development of any disease in a crop of potatoes is to start with good seed from a respected seed producer. Once growers have done what they can to minimize the chance of disease developing, they have to trust in the science and hope for good growing weather.

Related
On the watch for zebra chip
Late blight checklist for protection throughout the season
Potato wart found in P.E.I. fields for second year in a row
Officials respond to the extended U.S. potato ban
Tags