Group rotation – also called community rotation – is the practice of potato farmers working with their neighbouring growers to rotate their crops so their potato fields don’t come in contact with one another, or come in contact less often, helping keep disease and pests under better control. It also includes co-ordinating rotation so that planting of potatoes right next to neighbours’ fields where potatoes were just harvested is avoided.

With regard to some insect pests, Dr. Christine Noronha says that even planting potatoes a few hundred metres from where potatoes were last harvested can make a difference in their management. “The further you put a food source away from the pest’s stronghold, the more you will reduce the pest population,” observes the pest management scientist at the Agriculture and Agri-Food Canada Crops and Livestock Research Centre (AAFC CLRC) in Charlottetown, P.E.I. However, for this strategy to really be effective, she says, area-wide collaboration is needed.

Group rotation is a concept worth looking at further, agrees Dr. Vernon Rodd, a soil and water management scientist at AAFC CLRC. “If you had a field with a pest like wireworms, it would be a good idea to tell your neighbours so that they can mitigate accordingly,” he says. Rodd adds that because some potato pests are on the rise, group rotation discussions may become increasingly important in the future.

Discussions occurring?
Brian Beaton, the department of agriculture and forestry potato co-ordinator for Prince Edward Island, has not yet heard of any group rotation on a whole community basis. “Here on P.E.I.,” he says, “we have so many fields that are smaller fields and are farmed by different growers, and it is difficult to co-ordinate on a community basis.”

Kevin MacIsaac, general manager of the United Potato Growers of Canada, says he has heard of some producers on P.E.I. doing group rotation with seed potatoes, and that it’s actually fairly common in seed-growing areas. Dave Francis and his neighbours in the area of Lady Fane are among those who try to co-ordinate with one another. Francis grows about 70 per cent seed potatoes, with the rest being a small chip contract. “We have a lot of unofficial meetings,” he notes. “We try, so that if someone is planting a processing variety, [we] look after our neighbours who are seed growers in terms of [helping control the] common mosaic virus. In this area, in most cases, we grow both processing and seed potatoes and are very concerned about seed. We try to produce the very best we can.” He says in an area like P.E.I., where potato growing is so concentrated, working together is the best thing.

Rodd says that while he hasn’t heard of group rotation discussions among commercial potato producers, he has heard of some among organic growers. Dr. Eugenia Banks, potato specialist with the Ontario Ministry of Agriculture of Food (OMAF) and Ministry of Rural Affairs (MRA), says it would be of particular benefit to both types of growers to rotate their fields so that organic and conventional fields are not planted close by. “This is very important to reduce the risk of late blight,” Banks says. “Late blight is a community disease because spores are spread from field to field by the wind. Organic potato growers have access to only a limited number of crop protection materials under organic production regulations. There are, in contrast, several fungicides that conventional potato growers can use that will reduce the incidence of late blight with timely applications.”

Mandatory rotation and erosion control
On P.E.I., where potato growing is very concentrated, the Department of Agriculture and Forestry recommends that potatoes be grown no more frequently than one year in three, unless the producer has an alternative plan that will maintain soil quality, and that such a plan be approved by a qualified government soil engineer.

In other areas of the country, where potato production is usually not as concentrated, there is not as much need for, or discussion of, recommending mandatory rotation. MacIsaac confirms this, as does Don Brubacher, general manager of the Ontario Potato Board. “Nothing mandatory at this time and there has been no discussion regarding this,” Brubacher says. “My perception is that growers are doing a pretty good job.”

Banks says a one-year-in-two rotation is practised by most commercial Ontario potato growers. “To maintain/improve soil quality, farmers seed a rotational crop immediately after harvest,” she notes. “Grains such as rye and wheat are the most common rotational crops. Rye has been the most popular cover or rotation crop for potatoes, especially for light soils.” Banks explains that rye, unlike legumes, does not need a high pH and is very competitive with weeds. “It is one of the best plants to prevent nitrate leaching in the fall and it is a good source of organic matter,” she says. “Rye is also very tolerant of low winter temperatures.”

There is also restriction on P.E.I. concerning growing potatoes on field inclines above a specific grade. “It causes too much erosion,” says MacIsaac. Beaton adds “We have provincial legislation that states regulated crops cannot be planted on a slope over nine per cent that is one hectare or greater in size. In order to minimize soil erosion, there are many factors that come into play, and every field is different.”

MacIsaac is surprised that, given the steeper sloped ground in New Brunswick, they have no such restrictions in that province. Valerie Kilfoil, director of communications at New Brunswick’s Department of Agriculture, Aquaculture and Fisheries, confirms that there are no regulations to that effect at this point. She notes that best management practices relating to erosion are encouraged, including terraces. Funding for terraces in New Brunswick has been available for some time under Growing Forward I and II funding schemes. 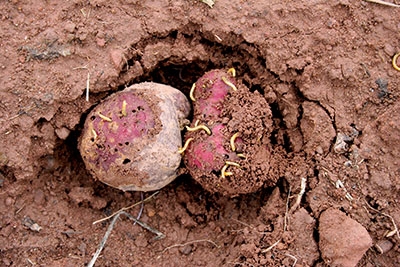