Although many consumers aren’t aware of it, potatoes have a lot of good things going for them when it comes to human nutrition. For instance, potatoes contain vitamin C, minerals, fibre, protein and bioactive compounds, plus they help provide a feeling of fullness that discourages overeating. Now an Ontario project is identifying some especially healthy potato cultivars that could help win back health-conscious consumers.

The perception that potatoes are not a healthy food choice has resulted in decreased potato consumption and production in Canada, notes Reena Pinhero, a researcher in the department of food science at the University of Guelph. She is leading this project along with Rickey Yada, dean of the faculty of land and food systems at the University of British Columbia.

Pinhero explains the potato’s bad reputation is based on two factors and she puts those two factors in perspective: “Potatoes are generally considered as a carbohydrate-rich food contributing to high calorie intake and causing weight gain. The fact is a potato is mostly water, so if you don’t eat too many, then you will not take in too many carbohydrates or calories.

“The second bad reputation is their high glycemic index reported by some studies. However, potatoes are not that dense, so the glycemic load from an average serving of potatoes is actually not more than any other carbohydrate food.” Potatoes tend to have low-medium to high glycemic loads, with the exact value depending on things like the food preparation method, the cultivar and where the potatoes were grown.

The project, which runs from 2014 to 2017, could help boost potato’s health reputation. “The project’s overall objective is to identify early maturing, coloured potato varieties with health benefits (low glycemic index and glycemic load, and high phytochemical antioxidants) and acceptable sensory qualities, that are affordable, accessible to low- and middle-income families, provide a price premium to growers, reduce importation, and provide retailers with local food,” Pinhero explains.

The project focuses on cultivars that are both early maturing and coloured because both traits tend to be associated with enhanced nutritional attributes.

“Potatoes generally contain many phytochemicals, such as various polyphenols, flavonols, anthocyanins, carotenoids, vitamins, et cetera. Coloured varieties, especially based on their flesh or skin colour, contain substantially higher amounts of these phytochemicals. These phytochemicals, which act as antioxidants, have [been linked to] many health benefits, such as providing anti-inflammatory effects and protection from cardiovascular diseases, many cancers and diabetes.”

According to Pinhero, early potatoes receive a premium price compared to late maturing varieties, but in Ontario at present, early fresh market potatoes are limited to white varieties. “The red and yellow varieties currently grown in Ontario don’t mature until September, creating a need for imports.”

Along with Pinhero and Yada, this collaborative project brings together several other researchers with diverse expertise, including Qiang Liu, Rong Cao and Benoit Bizimungu with Agriculture and Agri-Food Canada (AAFC), and Alan Sullivan and Andreas Boecker from the University of Guelph. The project’s industry partner is Grand Bend Produce based in Grand Bend, Ont.

The researchers are currently testing 14 varieties, including two advanced lines developed by AAFC’s Fredericton Research and Development Centre. Four of the varieties have coloured flesh and skin, five have either coloured skin or flesh, and the rest have either white or creamy skin and flesh colour.

Once the researchers have identified which of the varieties have the best nutritional qualities, they will conduct a sensory analysis of those varieties for consumer acceptance. As well, they are conducting marketing studies in collaboration with Boecker.

Multiple benefits
“We are excited that this research will bring out potato’s many healthy characteristics so the consumer can make an informed decision of a healthier food choice and the industry will also benefit from it,” Pinhero says.

She sees many potential benefits from the project for growers, retailers and consumers. Ontario growers will have more choices for early maturing cultivars, along with more opportunities for obtaining the premium price for early potatoes. And, at the same time, they’ll have more choices for nutritionally superior cultivars desired by health-conscious consumers. Retailers will have access to a greater variety of locally produced early potatoes and those varieties will be more nutritious. “Availability of [local] early maturing, coloured potatoes with health-promoting bioactives, high antioxidant potential, and low glycemic index and glycemic load, would benefit the table potato market, potentially expanding the [Ontario] market by $6.6 million,” Pinhero says.

The information resulting from the project could be used in efforts to educate the public about the nutritional value of potatoes. Such efforts could contribute to an improved health reputation for potatoes and to increased potato consumption in Canada over time.

Consumers will benefit from more nutritious, low-cost food options. “A recent study on vegetable cost metrics in the United States shows that potatoes and beans provide the most nutrient value, thereby providing affordable, healthy vegetables for low- and middle-income families,” she notes. “Along with lifestyle changes, these healthy potatoes could be part of a variety of healthier food choices for prevention of obesity, Type 2 diabetes, coronary heart disease and several forms of cancer.”

Funders for this project include the Ontario Ministry of Agriculture, Food and Rural Affairs, the Potato Cluster 2 of the AgriInnovation Program of Agriculture and Agri-Food Canada, and the Ontario Potato Board. 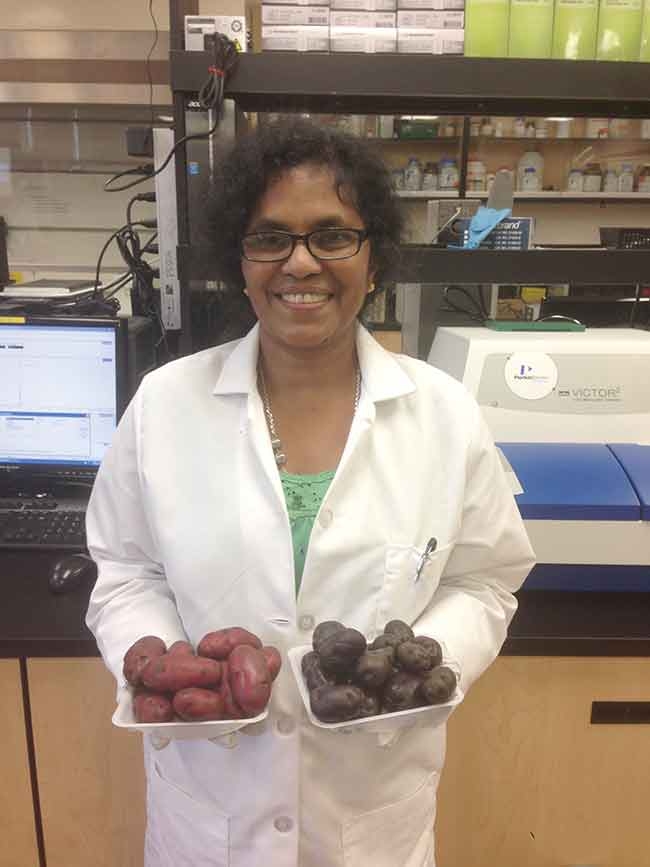