A New Brunswick researcher says that despite the common perception that water and wind are responsible for erosion, tillage erosion is actually the leading cause of soil degradation in most cultivated fields in Canada.

Li Sheng, a hydrology/croplands and water management expert with Agriculture and Agri-Food Canada, has been analyzing the causes of erosion in order to develop management recommendations.

His message is surprisingly positive.

“Our perception is that soil erosion is really bad in Eastern and Atlantic Canada, but it’s actually getting much better,” he says. “People are more aware of erosion, and a lot of structures have been put in place to reduce it. However, in critical times, you’ll still see a lot of erosion happening and erosion remains the number one cause of soil degradation in many fields.”

For the past few years, Sheng has led a research team conducting several studies in erosion. One study comparing water, wind and tillage erosion, conducted in partnership with David Lobb, a University of Manitoba soil researcher, found that wind erosion is much less severe than water erosion in Eastern Canada. While it is more damaging in Western Canada, wind erosion in most fields is still not at the same level as water or tillage erosion.

The most worrying aspect of erosion on the East Coast, says Sheng, is the combined effect of water and tillage erosion.

These days, Sheng’s team is testing the hypothesis that water and tillage erosion work together to create a more severe problem – that tillage erosion actually offers a mechanism for soil to leave the field by water erosion.

“If you have gullies going down the field, cutting through the soil to the edge of the field, if you till the field and fill those gullies in, in the next major rainfall event, all of this loose soil will be washed away,” he explains. “We are thinking that in Eastern Canada this is probably one of the major mechanisms of the transportation of sediments going out of the field.”

In the summer of 2015, Sheng and his team set up multiple research sites on Prince Edward Island and in New Brunswick. A gauging station on the edge of the field will measure sediment and take water samples. The research team also put cameras and erosion pins at different points in the fields to analyze surface changes due to erosion.

The study will run three years to allow the researchers time to collect solid data during potato rotation schedules.

Maintaining erosion structures
Sheng’s team has developed a list of best management practices to help growers minimize erosion. Conservation tillage and mulching are both key strategies, along with erosion management structures such as terracing and grassed waterways.

The latter might not be commonly used in Western Canada, but Sheng says it’s difficult to find potato fields on the East Coast that do not employ them.

The problem is a lack of maintenance.

“A lot of these structures are not very well maintained – there’s certain maintenance that has to be done to keep them functioning,” Sheng says.

Diversion terraces (sometimes called contour terraces) are one good example. On hilly land, diversion terraces break up long, sloping fields into smaller sections with shorter slopes, to slow down and divert runoff. “The longer the slope, the higher the water erosion, and the greater potential for eroded soil to be carried away by that high-power runoff,” he says. Terracing can vastly mitigate this problem. But growers should ensure they use terraces to their maximum potential – and don’t cut corners.

“Above the terrace berm, where the water comes down, there is supposed to be a one- to three-metre-wide channel, or runoff ditches, to allow runoff to flow at a non-erosive speed and sediments to deposit. However, many farmers will farm right to the edge of the berm, because allowing it means a loss of acreage and total production,” Sheng says.

Sometimes farmers are slow to clear out runoff ditches, but once filled, they lose their function. Runoff during heavy rainfall events can cut across the terraces.

But the number one cause of soil erosion in many fields – tillage erosion – is the problem growers should focus on addressing.

“Some farmers do recreational tillage – when they have some free time, they like to go out in the field and do additional tillage that is not needed,” Sheng says. But growers should reduce disturbance to the soil as much as possible, which means eliminating unnecessary tillage, and any other unnecessary disturbances during seeding or harvesting.

Most of all, growers should take a “landscape perspective” to erosion control, Sheng says, considering the entire system rather than individual fields and strategically employing best practices. 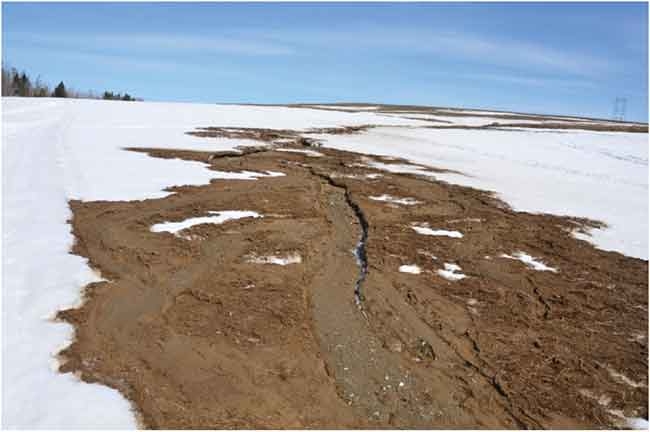 Snowmelt erosion created a wide gully in this field. A New Brunswick researcher says that despite the common perception that water and wind are responsible for erosion
Print this page