Features Chemicals Weed Control
Taking the time to get it right

Growing potatoes is an intensive business. With so many variables to control to ensure crop success, it may seem simpler to keep a schedule; for example, spraying for all weeds when they are at an average stage of development and then spraying for disease every Monday. But, according to a weed management specialist with Ontario Ministry of Agriculture and Food (OMAF) and the Ministry of Rural Affairs (MRA), this is not the best way to control weeds effectively – and maybe not even economically. 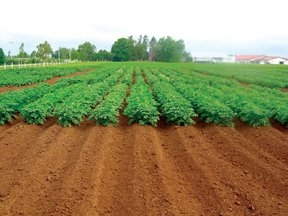 A hilled potato field Growing potatoes is an intensive business. With so many variables to control to ensure crop success

Kristen Obeid’s strategy on enhanced weed management offers a step beyond what has often been referred to as “integrated” weed management, as she demonstrated at the Ontario Potato Conference in March 2013.

Obeid says she is called to farms to help growers understand why their herbicides fail. She says it is usually not the fault of the product, but rather a lack of understanding on the part of growers of how to make the best use of the herbicide. “For example,” she says, “hilled potatoes mean there is in an increase in the area that has to be touched by the herbicide.” She explains that weeds grow up the sides of the hills and growers don’t adjust the height of their sprayer to accommodate the increased area. Some have the booms set to spray a flat field, but a hilled field is not flat and the boom should be raised. In addition, the hills create a larger surface area to spray. This is something growers don’t often take into account, and they instead compensate by increasing the amount of spray needed. In a simple example, across a 12-acre field, the hills might increase the actual surface area that needs to be sprayed by 33 per cent, so a grower would need enough spray for 16 acres.

But, increasing the amount of herbicide for an increased surface area is not enough, according to Obeid. She says if she could encourage growers to take the time to do one operation well, it would be to maintain the sprayer every year. “Sprayers need to be calibrated every year,” she says. “Growers also need to use the correct water volumes for every product. I see some growers using the same calibration for every product, but each label has specific water volumes for that product and what it will control.”

Herbicides aren’t the answer to all weed problems, Obeid admits. Herbicide resistance is a constant issue facing potato growers, but just rotating herbicides to minimize development of herbicide resistance isn’t the only solution. She says growers need to do what they can to ensure the health of the entire system from soil to crop.

“Scout fields regularly and identify all the weeds present so you can use the right control for the weeds that are present,” Obeid advises. “You have to actually walk into the field and have a look at what weeds are there and correctly identify them. Then, you need to practise good rotation to break up the weed cycle, which could help minimize what herbicides need to be used. Unless you know what you have, it’s hard to manage it.”

Obeid says the resistance problem will continue to increase because current chemistries available for use in potatoes have only a few modes of action, increasing the selection pressure on weeds, which eventually results in resistance development. With no new products expected in the near future, managing the ones that are available now increases in importance.

“Weeds grow quickly and you have to stay on top of it,” Obeid says. “You need to know the stage they are at in order to plan control, and waiting until you appear to have an average stage of weed development and do one pass may not be wise. Saving passes over the field may end up costing you money in yield.”

Weed management is a complicated process, according to Obeid, but it can be done by focusing on it and developing an
effective plan. Obeid’s steps include scouting each field, identifying each weed in that field and noting what stage they are at, determining if pressure is great enough to warrant herbicide action, choosing a herbicide, ensuring the water volume is correct for the actual surface that has to be covered, using the correct water volume for the product chosen and calibrating the sprayer. When a plan is developed, it is much easier to follow from year to year and it becomes a habit to do everything right, ultimately leading to successful crop development, reduction of potential resistance development and protection of the environment.

“Farmers are the smartest people on the planet,” Obeid says. “They know chemistry, biology, engineering, mathematics, so they can do all this.” But, she adds, some think they just can’t spare the time to set up an enhanced weed control system and then stick with it. If they did, they would be improving crop success and, perhaps, saving money.