Black cutworms were found in a number of fields near Delhi, Ont., on July 26, according to Eugenia Banks' latest potato update. 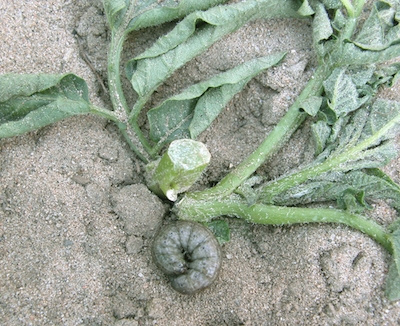 The end of July is usually when the second generation of black cutworms develop. Young larvae feed on foliage in the evenings and hide in the soil near potato stems during the heat of the day.

However, black cutworm is a sporadic pest and some fields are at more risk than others. Later planted stands seem to be more at risk, according to a black cutworm presentation by Ian MacRae from the University of Minnesota.

Banks urges that scouting is critical and that growers should look for holes in the leaves and spray in the evening when 10 per cent of plants show signs of feeding damage. Other signs of damages besides leaf feeding, are wilting, cut stalks or odd angles of the crop. Growers are encouraged to check around damage areas, up to half a metre around the feeding damage, and look under dirt clods. Feeding worms usually emerge in the evening.

Decis, Voliam and Express/Coragen are registered insecticides one can use to control cutworms.

Black cutworms have been a growing in popularity as a pest in Ontario over the last couple of years. Back in 2016, growers in Ontario and Western Canada were starting to see more occurrences of this destructive pest.