Ontario corn producers are dealing with high-DON (deoxynivalenol) in grain corn this year. High amounts of the mycotoxin are harmful to animals, so high-DON corn is unsuitable for feed and producers have limited end use options. 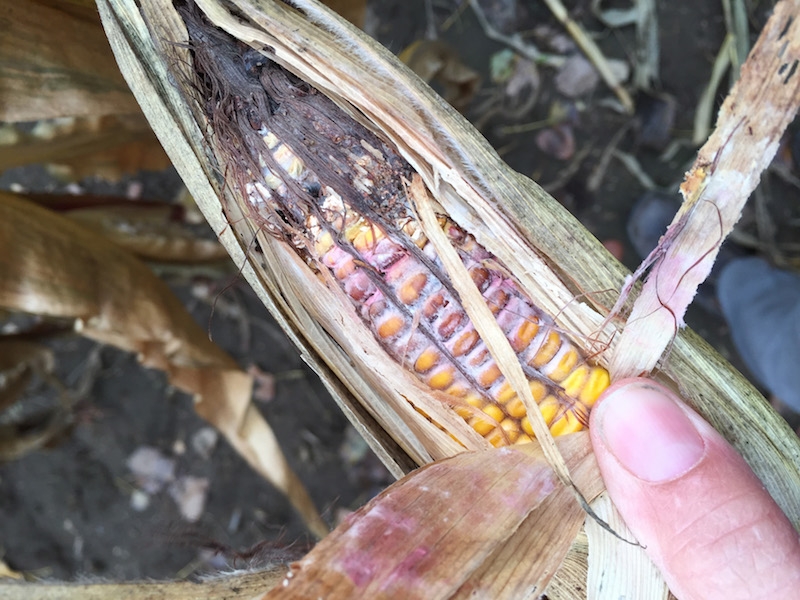 Ontario’s 2018 Grain Corn Ear Mould and DON survey found 60 per cent of samples tested low for DON, a increase from last year. Around 25 per cent of all samples have a DON concentration of five parts per million (ppm) and greater, and some producers have been reporting even higher levels such as 30 ppm, making 2018 a standout year for DON in corn.

A survey conducted in North Central U.S. by Gary Secor from North Dakota State University shows that the predominant cases of potato dry rot were Fusarium graminearum and Fusarium sambucinum. Banks clarifies that F. graminearum is the asexual state of Gibberella zeae. So the current pathogen responsible for the high incidence of corn ear rot can infect potatoes, and is usually one of the more common pathogens to infect potatoes.

Corn is frequently used in crop rotation with potatoes. The pathogen can overwinter in crop debris or in the soil, increasing the concern that the pathogen will be able to infect whatever is planted next in a rotation.

However, skin abrasions and bruising were not enough for an infection by Fusarium graminearum, according to Secor. The fungus currently wreaking havoc on Ontario corn requires larger wounds to penetrate tubers than other Fusarium species.

But, the cut surface of seed pieces will provide an easy entry for the pathogen, F. graminearum. Banks says a seed-piece treatment effective against Fusarium is a must for a field that had corn ear infections in 2018 and will be planting potatoes in 2019.

Gary Secor tested seed-piece treatments and found that thiophanate-methyl, the active ingredient in Senator, was effective against F. graminearum. While it was found to be effective, the fungus is still susceptible to other seed treatments available.