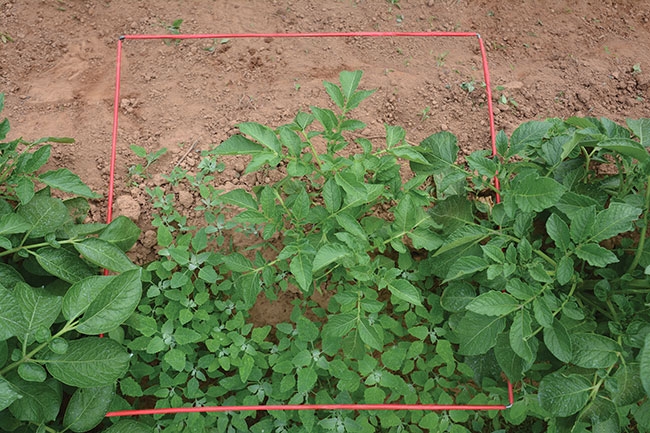 This five-year project was initiated in 2017 using soybean and weeds to test the capability of training sensors for recognition. In 2018, researchers advanced to focus specifically on potato plants and added diseases and insects to the project along with weed management. “We spent the second growing season in 2018 collecting data for weeds, diseases and insects in potatoes,” explains Andrew McKenzie-Gopsill, weed scientist with Agriculture and Agri-Food Canada (AAFC) in Charlottetown. “We started working with lamb’s quarters and potato, and were pleased that the sensors were able to accurately and reliably detect those plants in the field over 90 per cent of the time. We also focused on collecting data and training sensors for early blight disease and Colorado potato beetle.”

Other significant advancements in 2018 include a new method for processing data collected. “My collaborator Aitazaz Farooque, assistant professor in engineering at the University of Prince Edward Island (UPEI), has advanced the development of the machine learning system, which is now much less labour intensive,” McKenzie-Gopsill says. “At first, we needed thousands of images at various stages to train the sensors to identify the crops, but with this more advanced machine learning system, we only need 20 or 30 images to reliably detect whatever our target is. The only restriction is the system must be able to visually see the target for detection, so disease symptoms must be fully visible to be detected.”

The priority is to develop a system that will be cost-effective for growers. Therefore, the system is designed to use standard small RGB digital cameras with a cost of $30 or $40, and to be compatible with precision farming computer systems. The sensors, combined with algorithms and machine learning, are able to take the images from these cameras to train the machine to identify the characteristics of the potato crop versus everything else for example. For weed management, the goal is to train the system to learn to always recognize the potato and bare ground and then target anything else that is not. In some cases, the system may also be trained to learn specific weed or other pest targets along with the potato crop.

“For precision spraying applications, the image data being collected by the cameras or sensors will be transferred into the onboard sprayer computer system that will relay this information for variable-rate application,” McKenzie-Gopsill explains. “The information relayed into the variable-rate controller can then turn nozzles on and off, or vary the pesticide application rate on the go,” he adds.

“Another one of our goals is to train the system to detect soil variability. Currently, a large percentage of herbicides for potatoes are applied as pre-emergent applications. Therefore, if we can train the sensors to detect soil variability in soil organic matter and soil moisture, then the system may be able to vary the pre-emergent applications and improve efficacy of those products. In some situations, pesticide use may be able to be reduced quite a bit.”

The next steps in 2019 are to continue more intensive data collection for the various weeds, diseases and pests and the potato crop, and to continue to develop and integrate technologies and systems to identify variations within a field. Farooque has also been working on a new buggy system for image data collection that will make it easier to move through the fields and collect the image data required.

“We expect by the end of the project to have developed cost-effective, integrated sensor and smart technology digital tools for precision management applications in potatoes and other crops,” McKenzie-Gopsill says. “Overall our goal is to reduce pesticide use to only apply what is needed, to do it more sustainably and save farmers money.”