For potato growers, one of the most concerning and costly diseases is late blight, caused by the pathogen Phytophthora infestans. Estimated to cost almost $10 billion per year worldwide, late blight spreads by spores and can spread quickly in a field. Post-harvest losses can be substantial if infected tubers are harvested and stockpiled. Like other disease pathogens, new strains and novel genotypes of P. infestans have emerged over the past few years, creating new challenges for commercial potato growers. 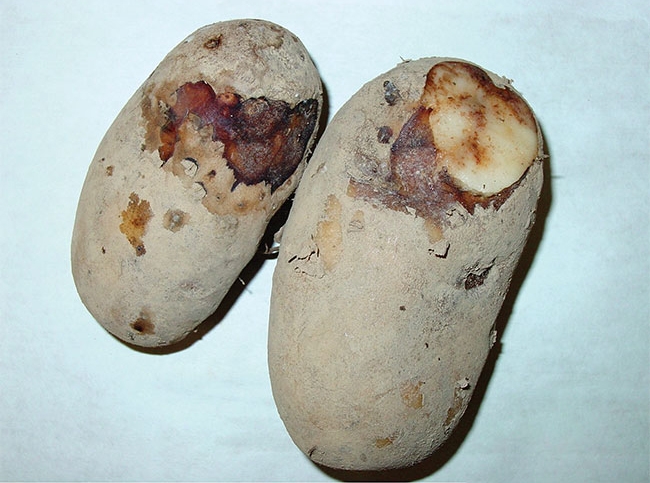 Management of late blight requires a multi-faceted approach by all stakeholders.

“For several years and up to about 2011, the pathogen strain US-8 dominated much of the potato production across Canada,” explains Lawrence Kawchuk, research scientist with Agriculture and Agri-Food Canada in Lethbridge, Alta., who also leads a pathology and disease molecular testing program for Western Canada and other regions. “However, as a result of recent management practices and other factors, a new strain US-23 is now the most prevalent across 90 per cent of Canada and the U.S., although each year pockets of other genotypes occur, including recombinants. We have focused our efforts on characterizing this new strain to determine why US-23 is so prevalent.”

Researchers discovered that one of the biggest reasons US-23 is now dominant is its preference for tomatoes in backyard gardens. US-23 produces much more sporangia on tomato than any other strain, and the spores are easily spread by wind, travelling 50 km or more at a time. For example, the disease will start in the west and with prevailing winds, will proceed over several months to eastern jurisdictions. “This pathogen can also tolerate dryer conditions and higher temperatures than previous strains,” Kawchuk adds. “We have seen situations where under relatively hot and dry conditions, the pathogen appears to dry out and stop spreading. However, when conditions are conducive, such as under cooler Alberta nights at temperatures of 15 or 18 C and water is applied to irrigated fields, we have seen the pathogen move about 10 metres overnight even though it looked dead. The conditions that would have stopped a US-8 strain, are the same conditions that the US-23 strain seems to tolerate very well. Fortunately, we didn’t see any incidences of late blight in 2018 Alberta potato crops, however growers and industry must be vigilant in scouting and monitoring for this disease.”

There are several strategies underway to try to address the challenges of US-23 and to identify best management practices (BMPs) that will assist growers in managing and minimizing this disease. Industry and government are working together to provide education for backyard gardeners and the practices they should use to help reduce the impact of this disease. Garden centers are providing tomato seeds and plugs of varieties with very good late blight resistance to gardeners, along with a late blight brochure. Information includes steps to take if gardeners see late blight in their tomatoes or potatoes in their backyard, which includes removing the diseased plants, putting them in a black garbage bag for five days and then disposing with the regular trash.

“For potato growers, one of the more important strategies has been the establishment of a network of spore trapping sites, which adds key data for predicting late blight risks through models and forecasts based on temperature and moisture,” Kawchuk explains. “This is really an advanced warning system of a week or two weeks of pathogen levels and helps guide growers to more proactive and precise fungicide application strategies. For example, in areas where no pathogens are found in traps, then growers could drop back to a fungicide spray every two or three weeks compared to areas where spikes in pathogen levels are high, then they would tighten up spray applications to every seven or 10 days. However, this pathogen also has the ability to develop insensitivity to some of the existing chemistries, so careful management is important.”

Controlling the initial inoculum at the beginning of the season is critical. Although some sensitivity has been found in US-23, using a systemic product such as metalaxyl (Ridomil) can be a beneficial first application of the season for commercial potato growers. Because the first wave of pathogens come out of backyard gardens where metalaxyl is not used, it is a good first season systemic application, unless the pathogen is already resistant, followed by other chemistries in the rest of the growing season. For commercial growers, other late blight fungicide tools are effective against the new strains, as well as other classic control measures, including disposal of culls, destruction of volunteer potatoes and the use of clean/treated potato seed.

Late blight can also cause problems in storage a month or two after harvest, even if symptoms weren’t visible at the time they were placed in storage. Kawchuk emphasizes that Phytophthora is one of few pathogens that can infect a healthy potato skin, it doesn’t need a bruise or wound to penetrate into the tuber. This often opens the door to other pathogens, such as Fusarium dry rot or soft rot that can’t get into healthy potato, but once Phytophthora causes infection, then other pathogens follow. “If growers find late blight in storage, they may want to consider moving them to processors early if they are able to take them,” Kawchuk says. “However, growers also typically receive premium prices the longer they can keep potatoes in storage. Some options for changing temperature and humidity conditions in storage may be recommended, or there are some available chemistries that may be used to reduce the impact of late blight in storage. However, the best strategy is to stop late blight early and prevent it from becoming a problem in storage.”

Researchers and plant breeders are also focused on developing varieties resistant to late blight through traditional breeding and new technologies. Several promising varieties with good resistance to late blight in both foliage and tubers are being developed through traditional breeding programs. Every year, three to five new registered varieties are put forward in Canada with new attributes including disease resistance. “We are also using new breeding technologies such as the development of transgenic varieties, which make existing varieties very resistant to late blight and other diseases. However, there are still some challenges with commercial and consumer acceptance at this time. Another new technology is CRISPR, which allows breeders to edit existing DNA sequences by just changing a single or few nucleotides to create durable protection against emerging races of P. infestans in existing varieties. This technology is accepted by regulatory bodies as not GMO status, allowing the uptake and acceptance of those varieties much easier.”

Next steps for Kawchuk and his team are keeping a watch out for the evolution of P. infestans strains. Although US-23 displaced US-8 as the dominant strain over the past few years, researchers predict at some point the pathogen will continue to evolve and produce a potentially new super strain. Being vigilant with monitoring pathogen evolution and continued characterization of new aggressive strains and host responses helps keep the industry prepared.

“Management of late blight requires a multi-faceted approach by all stakeholders across industry, research and government,” Kawchuk says. “Effective management strategies for preventing late blight remain a priority, including early detection tools, effective fungicide spray programs and removal of possible primary inoculum sources. The continued development of late blight resistant potato varieties through plant breeding remains a priority, which will help growers improve management in the field at the same time as reducing their reliance on fungicides for controlling the disease. Development of BMPs and sustainable management practices for growers continues to help meet yield, quality and market requirements.”

Related
On the watch for zebra chip
Can Ontario’s high-DON corn affect potatoes?
Orondis Ultra fungicide from Syngenta now available in premix formulation
Bouncing back from a tough harvest
Tags