Late blight spore traps set up in southern Ontario did not catch any late blight spores, according to Eugenia Banks’ latest potato update on June 26.

It is the third year spore traps have been set up in potato fields across Ontario to help detect spores of late blight. The traps are placed in Shelburne, Alliston, and Simcoe-Delhi areas.

Spore traps are low-technology devices that sit in a field and collect disease spores from the air and water. The collected filters are sent to A&L Laboratories for bi-weekly analysis to assess disease risk. The results are shared with growers and early detection of late blight potential helps alert growers to add late blight fungicide into their mix.

This year, Banks says the spore trap model has been upgraded and is easier for inserting and removing filters. 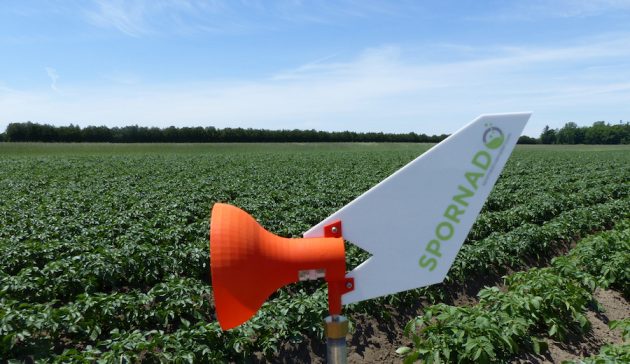 The latest model of the spore traps installed across fields in Ontario to help detect spores of late blight. Photo courtesy of Eugenia Banks.

So far in 2019, the only report of late blight has been from St. Johns County in Florida on April 22. The pathogen strain was US-23, the newest strain now the most common strain across 90 per cent of Canada and the United States. Prior to US-23, the strain US-8 dominated much of the potato production across Canada, according to Lawrence Kawchuck, research scientist with Agriculture and Agri-Food Canada in Lethbridge, Alta. who also leads a pathology and disease molecular testing program. Earlier this year, researchers discovered that one of the biggest reasons US-23 is now dominant is its preference for tomatoes in backyard gardens.

The U.S. report of the Florida find indicated that US-23 is susceptible to fungicides with the active ingredient mefenoxam, which is found in the commonly used product Ridomil Gold.

Last year, late blight was not a serious issue in Ontario, except in a couple of potato fields that were infected by spores coming from diseased tomato plants in home gardens. Banks also notes that not much late blight was reported last year either from the provinces that grow large acreages of seed.

Despite the low risk from last year, late blight is a devastating disease that requires vigilance and monitoring. Banks says late blight could be starting on potatoes in cull piles. A cull pile includes a few tubers left on the ground after planting and these tubers will be non-sprayed volunteers. Cull piles could also be a pallet box of silvers and suspicious tubers that were graded out at cutting but not destroyed, Banks adds. A more typical cull pile is a pile of potatoes graded out and left near storages. These cull piles could be a source of infected plants that could serve as a source of inoculum for the disease all season long. 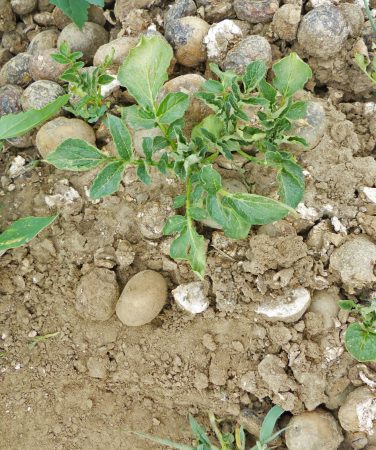 Infected plants found in cull piles could be a source of disease all season long. Photo courtesy of Eugenia Banks.

Banks suggests destroying cull piles before sprouts appear as a good first line of defence against late blight and shares a Summer Checklist for late blight.