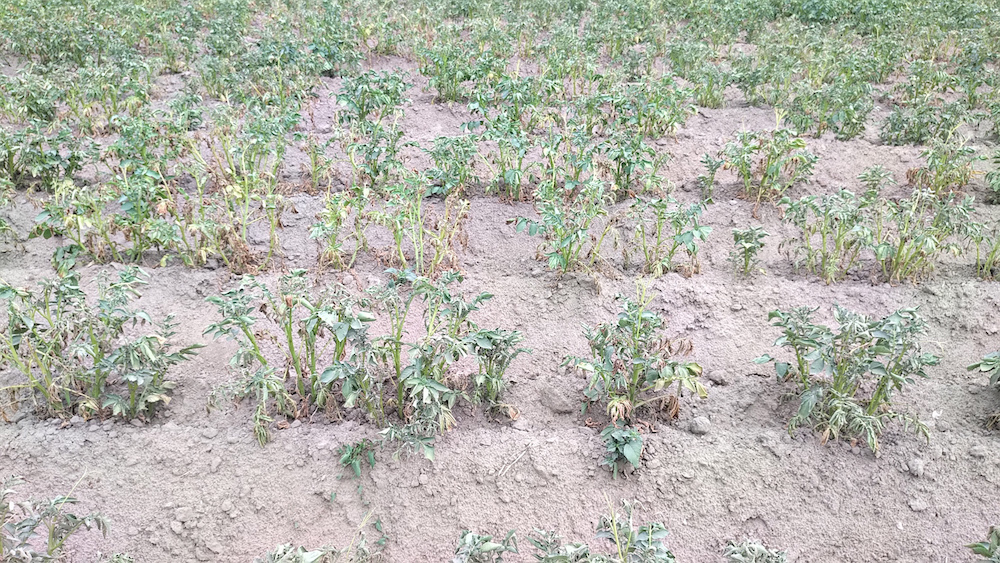 The impact of a summer drought is evident in Alliston's potato crop. Photo courtesy of Eugenia Banks.

The Alliston, Ont. area finally received much needed rain in mid-August after being hit hard by a summer-long drought, according to Ontario potato specialist Eugenia Banks’ latest update.

Grower Mark VanOostrum recorded how much rain was received by each area. North of Alliston received 0.5 inches of rain, while in between Alliston to Beeton received 0.7 to one inch of rain. Shelburne to Orangeville received a little more with 0.8 to 1.2 inches, while south of the 401 highway “Spud Lane” received the most with two to three inches of rain recorded.

The rain will take the pressure off irrigation for the next couple of days and should also help bulk the chip processing crop. While the rain is well received, some of the impacts of the drought have already been felt.

While checking a non-irrigated field of fresh market potatoes near Alliston, Ont., Banks spotted patches of early dying in the crop but did not attribute the source to Verticillium. Early dying can be a result of infection by a complex of plant pathogens or conditions, including Verticillium, and others such as soft rot bacteria, pathogenic nematodes, black dot, and general nutrient deficiencies.

Early dying describes when a potato crop fails to reach maturity and appears stressed. Banks says there was no discolouration of the vascular system and the field had been fumigated in previous years. Banks suspects its was the drought that was causing the plants to die in higher parts of the field.