As heat and drought continues across Ontario, irrigation has been the order of the day, according to potato specialist Eugenia Banks’ latest update.

Many fields are in the tuber setting stage. Banks says this stage requires adequate soil moisture for an optimum tuber set, which is why irrigation makes a difference. There is no steady rain in the coming week’s forecast, so producers will continue to irrigate.

In addition, fields with closed rows and vigorous canopies help keep the soil cool which reduces crop stress. It’s known that potatoes will suffer when the soil warms in direct sun. However, many fields in the province still have open canopies as a result of late planting.

Calcium has been shown to help reduce the effects of heat stress on potatoes. Potatoes in Canada interviewed Jiwan Palta, who studies calcium nutrition of potatoes at the University of Wisconsin, for more about how producers can cool heat stress in potatoes with calcium. Under heat stress conditions, the calcium need increases. “Applying rates anywhere from 50 to 150 lbs/ac during the bulking period is important. Interestingly, more calcium will not hurt the crop; it is more about the cost-benefit of applying higher rates,” Palta explained in the article.

Fusarium wilt has also been reported. Fusarium is a soil-borne fungus that enters potato plants through the roots and restricts water flow to the plant. The disease can be confused with Verticillium wilt. Banks says Fusarium wilt usually spreads through the steam, while Verticillium wilt is restricted to the vascular system and does not cause much rotting of the stem. Fusarium wilt also causes stem-end browning and internal browning of tubers, which reduces market quality. It is a difficult disease to manage because Fusarium wilt can persist in the soil for many years.

Fusarium wilt is a soil-borne fungus that enters potato plants through the roots and restricts water flow to the plant. 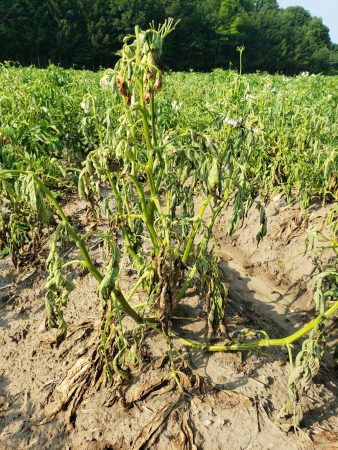 Banks has also noticed “fiddlehead” stems, a distortion that results from herbicide drift of 2,4-D or other auxin herbicides. This type of injury can lead to tuber malformations. There have also been low incidences of leaf burning causes by the high temperatures and high humidity. 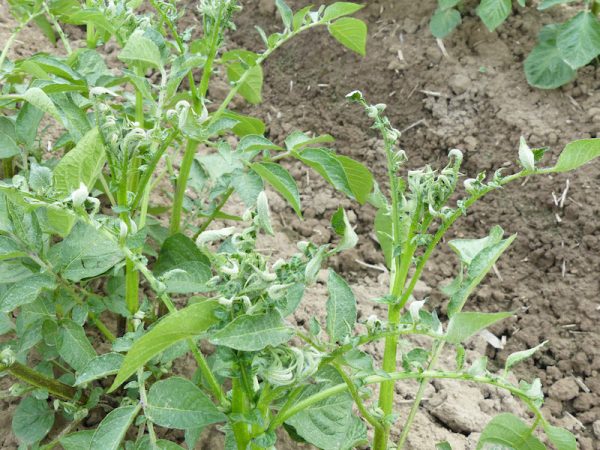 An example of what 2,4-D injury looks like on a potato crop.

Ontario producers are keeping good control of early blight. As of July 12, no late blight spores were detected by the province’s spore trap system.