In Ontario, the hot summer temperatures in 2018 reduced potato yields even under irrigation. A few cases of heat necrosis and/or calcium deficiency due to drought and heat stress were also reported. The hot, dry start for potatoes in many parts of Canada, combined with challenging harvest conditions that left many unharvested acres, resulted in lower overall production. 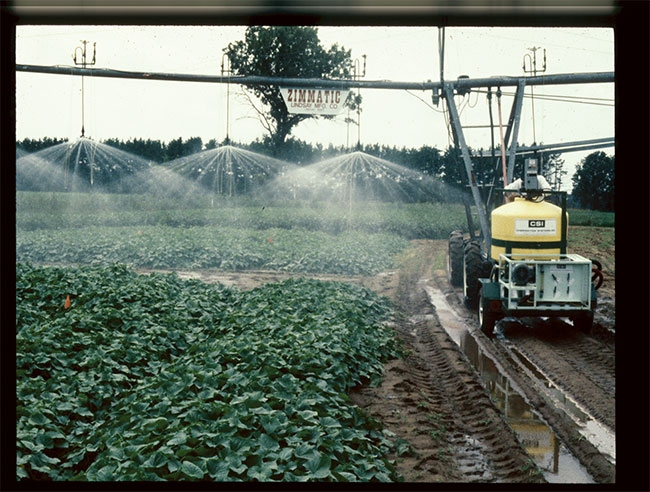 According to Kevin MacIsaac, general manager of the United Potato Growers of Canada, 2018 production was reduced by 2.8 million hundred weight below the 2017 crop. Industry had placed the losses closer to 5.5 million hundred weight but this appears to have been offset by increases of 2.7 million hundred weight in the provinces of Alberta, New Brunswick, and British Columbia. Although Canadian yields per acre would appear similar to last year’s 312cwt/acre, overall total production was lower. Hot, dry drought conditions not only impacted yield, but also caused some quality issues such as smaller tuber size, heat necrosis and hollow heart dockage. One strategy to combat heat and drought stress in potato tuber development is timely calcium fertilizer applications to the root zone.

“When I started this research over 35 years ago, little was known about calcium nutrition and fertilization in potato,” says Jiwan Palta, professor in the department of horticulture at the University of Wisconsin, and pioneer calcium researcher in North America. “At that time, calcium was used primarily to correct pH levels of soil by adding lime or gypsum. Calcium is also very abundant in soils, so nobody thought it was needed as a nutrient. It is a unique element and the dominant positive cation, next to silica, in the soil. Our research over the years has shown that although calcium is abundant in many soils, it may not always be at adequate levels in available forms. Calcium in the soil must be 60 per cent of the total bases of calcium, magnesium, potassium and sodium to have a good soil for growing potatoes.”

Researchers also thought that if the potato plant (foliage) had enough calcium, it would provide enough to the tubers. However, Palta’s research work disproved that, showing that calcium is not re-localized from the leaves to the tubers in the plant. His research showed that the tubers are independent of the plant and have special roots (tuber roots, tuber-stolon junction roots and stolon roots) to transport water and calcium from the soil to the tubers. Therefore, the implications for a fertilizer program are that placement and timing of calcium fertilizer are important to enhance tuber calcium concentration and thus tuber quality.

Early research to demonstrate that liquid

“Heat stress during the mid and late season can result in heat necrosis in tubers,” Palta explains. “Our studies have shown that giving water soluble calcium during the heat stress period can improve plant health and reduce heat necrosis in tubers. In one of our earlier studies, we showed that calcium fertilization (water soluble form of calcium) during bulking could mitigate an adverse impact of heat stress on tuber yield. We found that during the stress period the cell membrane function can be protected by having higher calcium concentration in the root zone. In a controlled environment experiment, side-by-side comparisons were made on the impact of calcium nutrition on potato plants grown at either 20 C day/15 C night cycles (normal) or 30 C/15 C (heat stress). Plants were grown in a sandy loam soil that tested at 1,500 kilograms per hectare available calcium per hectare (adequate amount of calcium for potato growth). The results showed that plants given calcium under heat stress had better plant growth and higher tuber yield, up to 30 per cent higher, as compared to plants with no supplemental calcium under identical conditions.”

Therefore, application of calcium during the stress periods should help protect potato plant health and improve tuber yield and quality. Effective method of delivery of calcium to the potato crop would depend on the soil type and if the crop is irrigated or not. It is important to provide a readily available form of calcium during the stress periods. Calcium is an important nutrient for potato production, not just for heat and drought stress, but also for other stresses such as during freezing and frost injury. Calcium deficiencies also cause conditions such as hollow heart, and other growth and development problems in tubers. Issues such bruising and injury during harvest and post-harvest handling, or storage rot can be reduced dramatically by applying calcium.

As a result of Palta’s research findings, several liquid formulations of calcium fertilizer are available, either as a water-soluble calcium nitrate or calcium chloride form. There are also many new soluble formulations that are readily injectable for later in the season, to ‘spoon-feed’ potatoes as required. In sandy soils, adding supplemental calcium during tuber bulking is very critical for tuber development. Sandy soils are often irrigated two to three times a week due to their low moisture holding capacity, which continuously washes the top portion of the hill, moving soluble nutrients to the lower portion of the hill that may be available to the vegetative growth through the main root system. However, the tubers developing during late season on the upper portion of the hill won’t be able to access these nutrients, therefore, requiring a supplemental application. It is important to provide readily available forms of calcium during the stress periods. Although cultivars vary in tuber calcium concentration, 200 parts per million in the internal tuber tissue is considered desirable.

“Under irrigation, delivering liquid calcium fertilizers through the irrigation water during the bulking period is recommended,” Palta explains. “The recommended rate is for a total of 100 to 150 pounds per acre (lbs/ac), which is split into three or four applications every two or three weeks, starting at the tuber initiation stage. Some of the formulations such as calcium nitrate contain nitrogen (N), therefore the N application needs to be adjusted to get the desired total N for the season. Although initially there were some concerns that applying N later in the season would hurt tuber development, our research has shown that it does not. It actually is better for the plant and the environment to use split applications under irrigation, rather than applying all of the N at hilling in mid-June, which can be washed into the groundwater by heavy rains. If growers see a drought and heat stress period forecasted, that is a good time to plan to apply a split application.”

For dryland production, one option is to apply calcium at the last hilling time, mixing the product into the soil. In sandy soils, because of the potential for leaching, it may be better to use less soluble products such as gypsum. In heaver soils, soluble products such as granular calcium nitrate can be incorporated into the hill. “Growers can also consider applying liquid formulations similar to how fungicides are applied and sprayed on the plant,” Palta adds. “If the application is tied together with a rain, then the rain will wash the calcium from the foliage to the top of the hill and down to the tuber. There are also special sprayers available that target the soil during application. Growers are very good at figuring out what works best in their farming system to get the calcium applied towards the top of a hill in a soluble form. One consideration is to be careful putting a salt on the plant that can burn if not washed away by rain, however, using a dilute form and in adequate concentrations is useful and can be particularly important during heat and stress periods while the tuber is developing.”

“Timely calcium fertilizer applications directed to tuber development can help address heat and drought stress conditions in any growing system,” Palta says. “Applying rates anywhere from 50 to 150 lbs/ac during the bulking period is important. Interestingly, more calcium will not hurt the crop; it is more about the cost-benefit of applying higher rates. Overall, the benefits of proper and timely calcium fertilizer applications include improved quality and yields, reductions in storage rot, reduced internal defects such as hollow heart, brown spots, black spot bruise and reduced impacts of heat, drought and cold stresses on the plant and tuber development. Remember under stress, the calcium need increases.”