What is the status of Group M fungicides and neonicotinoids in the re-evaluation process? 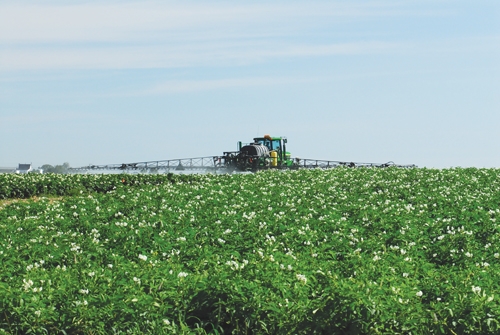 Spraying a mineral oil (tank mixed with an insecticide and/or a fungicide) to reduce transmission of PVY by aphids.

Canada’s Pest Management Regulatory Agency (PMRA) has wrapped up, or is expecting to wrap up in 2020, several pesticide re-evaluation decisions for commonly used active ingredients in the potato industry such as Group M fungicides and neonicotinoids.

Tracy Shinners-Carnelley, vice president of research and quality at Peak of the Market, presented on coping with pesticide re-evaluation at Manitoba Potato Production Days held in Brandon, Man. from Jan. 28 to 30, 2020. Shinners-Carnelley provided an update on the Group M fungicides: chlorothalonil, mancozeb, metiram, captan, and neonicotinoids which includes the family of insecticides imidacloprid, clothianidin and thiamethoxam.

“I think [pesticide re-evaluation] has become more of a timely topic for potato growers in the last number of years because so many key active ingredients in the potato industry were either undergoing reevaluation or special reviews,” Shinners-Carnelley says.  “So a lot of us in that industry has been consumed for the last number of years in responding to PMRA consultations, but now we’re at the point where we’re actually seeing final decisions being published and those label amendments being implemented.”

Chlorothalonil is a broad spectrum fungicide used by potato growers to control late blight, early blight and Botrytis gray mold, among other uses in field vegetable, berry and tree fruit crops. Chlorothalonil-containing products are sold under the names Bravo, Echo, and Daconil. It is a Group M fungicide and Group M fungicides are an essential component of a potato grower’s toolbox.

“The Group M fungicides are of tremendous importance,” Shinners-Carnelley says. “Between chlorothalonil and mancozeb, these two active ingredients really formed the backbone of disease management programs for potato growers across the country.”

PMRA published the final re-evaluation decision of chlorothalonil on May 10, 2018. Significant changes were made to use patterns for the fungicide, including on potato. Growers must be aware of how they should adjust their use of the fungicide because new fungicide use rules are in effect after May 10, 2020.

Shinners-Carnelley’s presentation touched on four major specifics that growers should be aware of and have the ability to impact their workflow involving chlorothalonil.

Shinners-Carnelley says that the specifics of what constitutes “downhill” or “aquatic habitats” has not been clarified, and require some more detail. However, she does clarify that a vegetative filter strip is different from a “spray buffer zone” that works to protect land and aquatic organisms in case of spray drift – not runoff.

Mancozeb is one of the most economical broad-spectrum fungicides for early and late blight. Mancozeb-containing products are sold under the names Fortuna, Dithane, Koverall, Manzate, among others.

PMRA re-issued a proposed decision for mancozeb in October 2018. The updated re-evaluation decision for mancozeb suggested cancelling all uses of mancozeb except on tobacco due to unacceptable risks to human health and the environment. There was a three-month consultation process that sought feedback from growers on how the fungicide is used in modern potato production and a final decision is expected in June 2020.

Mancozeb is not banned in the European Union or in the United States, having undergone its own re-evaluations in those countries in 2018 and 2005 respectively. Industry members expect a reduction in applications for growers, but not a complete elimination.

Even though the PMRA deemed the metiram fungicide acceptable for potatoes with conditions, BASF decided to discontinue its metiram products anyway.

The metiram active ingredient is a part of two products: Polyram DF (a stand-alone metiram formulation) and Cabrio Plus (a co-formulation of metiram and pyraclostrobin). For the 2020 growing season the following changes are in effect:

Captan is a Group M fungicide that has not traditionally been used on potato, but after its own re-evaluation process, remains acceptable for use on potato. It is registered for ground and aerial application as along as its within the maximum of three applications per season.

Shinners-Carnelley says that it’s a fungicide for future consideration and good to keep in the back of growers’ minds. “My suggestion to growers is to keep this in the back of your mind for future consideration. It is a Group M option and if we do see dramatic reduction in the number of mancozeb applications – once we get a final decision on that – perhaps it’s a matter of looking at captan as an option to include in potato management programs going forward, because it will give that broad base of protection and make a good mix partner for so many of the newer fungicides,” Shinners-Carnelley says.

There is less news on the status of neonicotinoids at the current moment. PMRA has been conducting special reviews over the last few years on the insecticides imidacloprid, clothianidin, and thiamethoxam after concerns were raised on the effect of these ingredients to pollinators, aquatic invertebrates and squash bees.

The pollinator special review has been completed and the use on potatoes has been maintained, but fuller final decisions on the status of these insecticides are expected in the fall of 2020.

When in doubt, growers should consult the most updated label of a product. PMRA states that the official label will be the one in the pesticide registry.

Producers can use the pest control product (PCP) number on the container to search the PMRA label database and access current labels. PMRA’s pesticide label search is also available as a free app for your mobile device.