Organic spuds still niche, valuable for those who decide to grow the delicate crop. 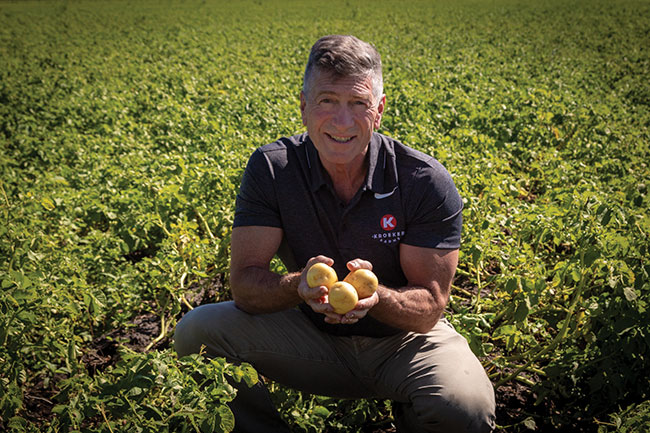 Wayne Kroeker, CEO of Kroeker Farms in Winkler, Man., cautions farmers who may want to get into growing organic potatoes to do their homework and truly understand all angles of the specified production. Photo courtesy of Kroeker Farms.

Organic food consumption and production continue to surge. Consumers are hungry for more organic offerings of their favourite foods. In 2020, Canadians spent $6.9 billion on organic foods, a 3.2 per cent capture of the total market sales in Canada, according to data from the Canadian Organic Trade Association. That number is also up from $5.4 billion in 2017.

Other consumer preference research has indicated that the younger the buyer, the more likely the demand for organic is, which may represent a market for organic potato growers in Canada. And while the idea is relatively new for many, there are farmers out there already taking advantage of the niche marketing opportunity.

Items to consider
Wayne Rempel, CEO of Kroeker Farms in Winkler, Man., has seen a dramatic rise in demand for organic potatoes since the farm branched out into diversified production. They began with 20 acres of organic potatoes in 2002, and that number has steadily risen to 1,000 acres today. But it hasn’t been easy.

“Several times we almost quit growing organics,” he says. “We couldn’t find the right varieties, quality was hard to achieve and we started thinking it’s going to be a lot more work and cost more to grow, so hopefully we get a premium.”

While the value proposition for growing organic wasn’t what it was today, Rempel kept at it. He offers potential organic potato farmers a few items to consider based on his own experiences. Currently, Manitoba does not offer a reasonable organic crop insurance program, which he believes is the greatest impediment to increased organic production in the province. There is also a constant threat of blight which could wipe out his entire crop overnight. In addition to weed issues, Rempel’s spuds are a prime target for the Colorado Potato Beetle, a deadly pest with few available chemistries to control it due to tight restrictions from the Pest Management Regulatory Agency.

He explains, as well, that to get into organic production, your fields must be fallow and free from chemicals and fertilizers for three years, so farmers should be prepared for that.

“You have to produce something,” he says. “Sometimes we’ve decided not to produce and still have to manage weeds.”

Specific equipment for organic-only crops should be discussed, too. In addition, rotational crops will be grown on that field for three to four years after the potatoes themselves have been harvested, and the right equipment is needed to manage those crops. It is unique equipment not used or needed in conventional production of the same crop, Rempel says.

Nonetheless, the margins Kroeker Farms hits at times makes up for all the headaches and sleepless nights managing organic potatoes.

“On years when potato prices are relatively low, we make a significant premium because organic is fairly stable,” he says.

The yields at Kroeker Farms are typically pencilled in the year before at 65 per cent and the finance department plans from there. He says others go as high at 75 to 80 per cent.

Still, at a hypothetical 65 to 75 per cent, there is a positive margin to be made, and Rempel believes consumer demand is only going to increase.

“More and more, people are interested in organics in every aspect of their diets,” he says. “They want all the same products you can get in conventional. When we first got into it, people said it was a fad. Clearly it’s not a fad, so I wish people would see that it’s way more than that. I think it’s going to continue to have some growth every year.” 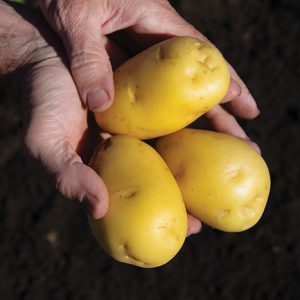 While organic potato growing may not be for every farmer, some say there are market premiums to be found. Photo courtesy of Kroeker Farms. 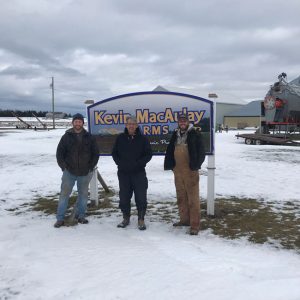 MacAulay first decided to grow organic to try a more “environmentally friendly” brand of agriculture and explore the premium market space. The majority of their potatoes are exported to the eastern United States for the table-top market.

He says, where a 250 hundredweight (cwt) for potatoes is normal, a great result for organic would be 150 cwt. However, his weight typically hovers around 125 cwt.

At the farm, biologicals are being deployed in the fight against pests, weeds and fungi, including a copper product that has shown good results. In addition, MacAulay uses an organic pesticide with Spinosad as its active ingredient.

“We use the services of a crop scout and also use a weather station where we can get blight spores counts in the vicinity,” he says, adding that it is very hard to control the weeds. “You must watch things very closely, monitor the bins and move the potatoes as quickly as possible.”

The short-season potatoes he grows work well with hot, dry summers, which naturally allows the potatoes to die on their own, saving on conventional spray applications. The farm equipment, including as his weeder and row spacer, is also specialized. He has been able to capitalize on provincial rebates, as well, which helps ease the financial burden.

The give-and-take on his farm is meticulously calculated, as inputs are costlier than a conventional potato farm.

“The input costs are higher, but we use less inputs because the land seems to be in better condition,” he explains.

He echoes the sentiments of Rempel and explains how, without more organic potato growers, companies do not see an economic return to develop new chemistries for farmers.

To be gentle on the organic spuds, MacAulay uses boxes rather than bulk bins. The pricier storage method makes it easier to spot rotten potatoes, which is helpful during sorting and moving product.

And since MacAulay is unable to use a sprout inhibitor on his potatoes, he has invested in venting and refrigeration systems.

“It is a must for organic growers,” he says. “This is costly, but many conventional farmers have them, also.”

He says demand continues, although it’s not as high as it has been at different times. Nonetheless, MacAulay believes that organic potatoes represent a premium market share he continues to provide for a tenth straight year.

“People want a nutritious, healthy product that is not going to have a negative impact on the environment.”