Canadian potato storage holdings, with includes all sectors, are the lowest of the last five years, according to the United Potato Growers of Canada’s update on April 1.

All provinces show a decline from April 2018, except for British Columbia which has a 82.5 per cent increase from the previous year. However, this number is inflated because last year’s crop was a very poor one. A more accurate understanding would be looking at longer term averages, which still show good potato progress, because British Columbia stocks are 55 per cent above their three year average.

Canadian seed potato storage is also less compared to a year ago, with an overall 6.7 per cent decrease in holdings from 2018. However, Quebec and British Columbia are the only two provinces with more seed than a year ago. Some of the biggest changes are seen in Ontario and Manitoba, where seed storage is down by 42.5 per cent and 17.2 per cent respectively.

According to the United Potato Growers of Canada, most seed growers report being fully booked and sold out and there will be “very little” seed available for any replanting that usually occurs each year.

The processing sector is also seeing a decrease. Potatoes intended for processing are down 3,664,000 cwt., or 11.9 per cent, compared to April 2018. In processing, all provinces that grow potatoes for the sector have fewer than last year. 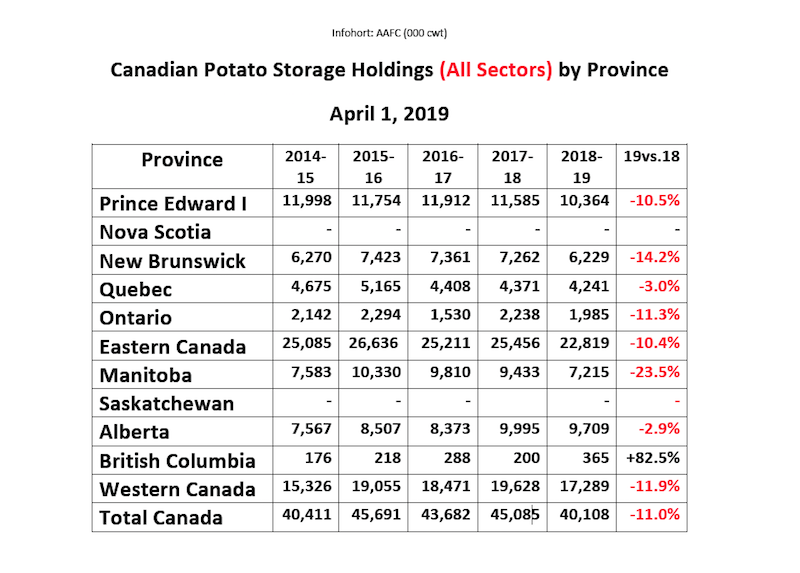