Soil health plays a key role in the prevention and management of soilborne potato diseases. 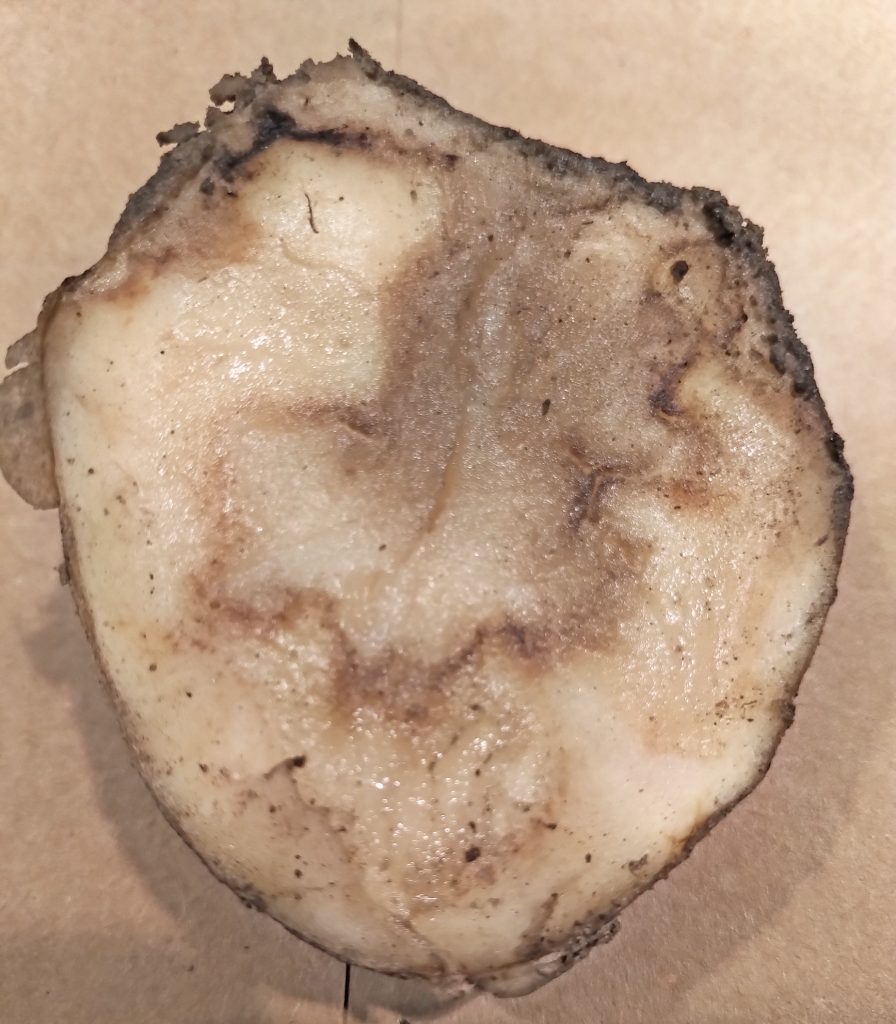 Blackleg starting to appear on a potato. Photo courtesy of Eugenia Banks.

Robert Larkin, a USDA-ARS research plant pathologist based in Maine, discussed the different ways crops can lower disease pressure and all about soil health more broadly in a recent episode of Potatoes in Canada’s Tuber Talk podcast.

Q: What is the correlation between soil health and disease?

Larkin: Well, that’s closely related. When you have poor soil health, you have conditions such as inadequate drainage, poor soil structure, low microbial activity, low organic matter – those are all things that can lead to more diseases.

Q: You’ve spoken about disease-suppressive crops work in multiple ways: by not being a crop host to the disease, by actively lowering pathogen levels, and by boosting soil health so the overall growing environment is more resilient to disease. Can you expand?

Larkin: In general, we think of crop rotations as being a break from your main crop and [so rotation length makes a difference]. The longer you’re out of potatoes, the pathogen involved will decrease in quantity because there’s no host crop available. But other crops have the ability to more directly affect soilborne diseases and soil pathogens.

One mechanism is through this buildup of soil health properties – increasing organic matter, having a more extensive root system that leads to more extensive soil microbiology – all of these things can help stimulate microbial activity. Diversity leads to a general suppression of pathogens and diseases, and it may also help stimulate more beneficial organisms that are antagonistic to pathogens.

The third mechanism has to do with the plant crop itself directly inhibiting the pathogens and reducing those pathogens. In that case, the plant products themselves produce compounds, that when broken down, release volatile toxins or compounds that can kill or inhibit pathogen growth. They also can reduce nematodes and weed seeds and through a process that’s similar to using a chemical fumigate.

Plants in the Brassica family produce compounds called glucosinolates which breakdown to produce isothiocyanates. [Isothiocyanates] are a similar chemical product as are produced with compounds such as metam sodium, which is a chemical fumigant, but this is a biologic production of it. By chopping and incorporating the plant material, it releases these gases and you get a biofumigant effect that reduces populations of these pathogens.

In addition, many of these disease suppressive crops also alter the soil microbial communities in ways that may or may not be the same or different from these biofumigation properties. [The crops], in compounds that they produce, change the soil microbial composition to some degree, and those also can be directly inhibitory to pathogen compounds and reduction of soilborne diseases.

Larkin: Crops that produce a large amount of biomass will help increase organic matter in the soil as well, when it’s turned back into the soil. Those [crops] that have more fibrous and extensive root systems like some of the grasses, they also will produce more below-ground biomass and increase rhizobacteria. [Rhizobacteria] are bacteria that are closely associated with plant roots, and a lot of these are protective of plants [and] . . . can help reduce these pathogens in the soil.

Q: What about canola?

Larkin: Canola has been bred not to produce as much of these glucosinolate compounds – at least in the seed, it still produces it in other parts of the plant – but to a lower degree than some other high glucosinolate brassicas like mustards. So [canola] can still have some of this biofumigant effect but not to the degree that mustards do.

However, [canola] seems to have more of a role in this alteration of soil microbial communities. We’ve seen particularly in the effect against Rhizoctonia solani, which causes a stem canker and black scurf on potatoes. We’ve seen, in some cases, more efficacy with canola against that pathogen than some of the other products do. It does seem to be related more to this change in soil microbial communities than it does have to do with the fumigation effect.

Q: You spoke about how mustard shouldn’t be treated like another cover crop, it needs management, can you expand?

Larkin: For these biofumigant mustards, in order to get the most out of it, you do need to treat them very carefully and with specific management practices. They do require fertilization so you need to add nitrogen. They also, in a lot of cases, need sulfur added. Sulfur is one of the compounds that’s involved in biofumigant production. Generally, you want a 6:1 ratio of nitrogen to sulfur. Whatever you put on in nitrogen, you want a corresponding amount of sulfur in that 6:1 ratio.

In addition, for these biofumigants to be most active, they do need to be incorporated while they’re still green in full bloom. For maximum effect they need to be plowed down at this full bloom stage. The soil needs to be moist when you do it too. And it works much better if you mow or chop the crop initially and then follow that immediately with incorporation to get the most benefit of these mustards.

“In addition, for these biofumigants to be most active, they do need to be incorporated while they’re still green in full bloom.”

We also recommend that you do follow those [mustards] with a fall cover crop because, generally at least under our conditions [in Maine], the Brassica crop is grown in the summer. Towards the end of the summer, after you incorporate your mustard, you still got a lot of season where the field will be fallow. So you’re going to want to put in a fall cover crop, something like winter rye. Or a lot of our growers have been planting tillage radish for its beneficial effects on soil health as far as the reduction of compaction. Tillage radish gets a pretty good amount of biomass, but it mainly will help with increasing aeration and reducing compaction in soils.

Q: Building soil organic matter is a long-term process. How long should you commit to trying out these practices before you switch to try another practice?

Larkin: A lot of these [practices], it’s not like adding a chemical fumigant where you immediately see a dramatic reduction in the first year. You should see a reduction, a significant reduction, but you’re not going to eliminate your problem in one or two years. And some of these other soil health building processes can take many years of building organic matter, that’s not going to happen in one or two years.

We’ve designed our trials so that we are looking at these [practices] over the long term. You’ve got a long-term cropping system study that has been put in place for 15 years now, where we’re able to look at what these longer-term consequences are. Some of these small incremental changes that may not look like they’re having a big effect in those first couple of years, but after five or six years, they can have more dramatic effect.

“The other thing we recommend is that you can’t really rely on doing one thing and expecting that to take care of whatever issue or problem you you’re concerned about.”

The other thing we recommend is that you can’t really rely on doing one thing and expecting that to take care of whatever issue or problem you you’re concerned about. You want to incorporate multiple approaches that all build on each other and, and that’s how a lot of these work. Using a disease-suppressive rotation crop, cover crop, incorporating green manure where you can, if there’s other places where you can add organic amendments, all of these things are pieces to the total system.

Listen to the full episode and access show notes by checking out Tuber Talk on Apple Podcasts, Spotify, Google Podcasts, or online wherever you listen to podcasts.

This interview has been edited for length and clarity.