Statistics Canada released their first estimate of potato acreage in Canada from data obtained with their survey of Canadian potato growers.

The 2021 potato acreage is estimated at 378,624 acres. This is an increase of 5.3 per cent above 2020, when acreage declined below 2019 plantings due to COVID-19 market uncertainty. This year’s increase – predominantly in major processing provinces – helps bring the industry’s supply back to meet demand increases that began pre-COVID. The acreage of potatoes planted in Canada is still well below its peak of 457,500 acres, which occurred back in 2003. 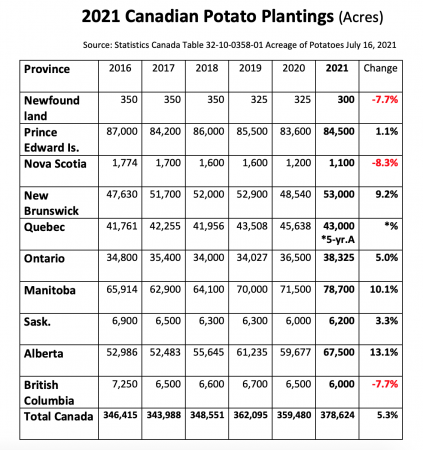 The most significant acreage increases in 2021 occurred in the Western Canadian provinces of Alberta and Manitoba, each of which has had processing plant expansion in the last two to three years. Alberta producers planted an additional 7,823 acres, or an increase of 13.1 per cent from 2020, and Manitoba growers planted an additional 7,200 acres, or 10.1 per cent more than last year.

The third largest increase is in New Brunswick, where an additional 4,600 acres (9.2 per cent) were planted to help supply a formed line expansion for the province’s fry plant. Ontario’s increase of five per cent is also driven by strong processing demand but for chips instead of fries. Prince Edward Island reports an increase of 1.1 per cent, for a total of 84,500 acres, as it continues to plant the largest acreage in the country.

Quebec data was not available during the collection period, so the five-year average of their seeded acreage (43,000) was used in its place. However, industry expected acreage to be at least equal to last year’s 45,638 acres with demand increases identified for both fresh and processing sectors. It is also surprising to see a five per cent decrease reported in British Columbia’s acreage, down to 6,000 acres. Acreage in Saskatchewan increased by 3.3 per cent, bringing it closer to traditional levels at 6,200 acres. Nova Scotia reported a decline of 100 acres this year.