For the latest in Ontario potato production, we turn to Eugenia Banks with the Ontario Potato Board.

In early September, Sauble Creek Seed Company in Southampton held a grand opening of their new “state of the art” potato seed storage and handling facility. The event was attended by approximately 50 industry people. Duane Holm and Jacco de Lange are the partners of this new seed potato company.

The benefits of storing seed potatoes in boxes were outlined by Holm and de Lange. They explained how the unique Klim Top Controls ventilation system from France will control temperature and humidity to optimize the seed storage conditions to supply ideal physiologically conditioned seed to their buyers. Construction will be completed soon and the facility will be filled with 250 acres of seed potatoes by October. 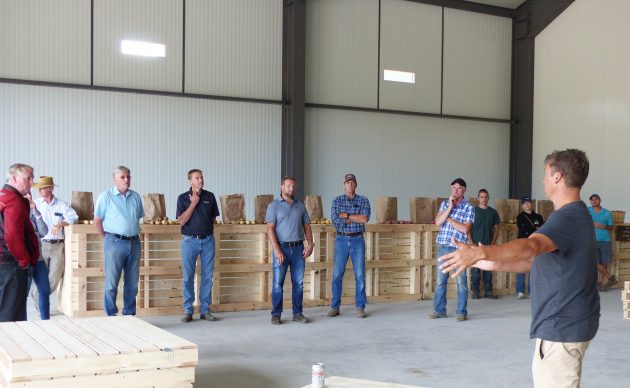 There was a display of a good quality new and standard varieties produced by the Sauble Creek Seed Co., as well as by Atkinson Farms and Squirrell Farms. The event was co-sponsored by the Ontario Seed Potato Growers Association (OSPGA). The association’s new mission is to support new large and modern seed potato production operations to meet most of the seed potato needs for all commercial growers in Ontario.

On the disease front, Andy Robinson from North Dakota State University issued an alert in early September for early blight tuber infection. Early blight is not common, but pathogens seem to be evolving and diseases are showing symptoms not often seen before. Early blight lesions on stems – brown, irregular spots – are common in heavily infected fields.

According to Robinson, symptoms appear as dark-coloured, sunken lesions on the tuber surface with a dry, corky texture and dark brown colour under the skin. More information can be found at https://www.ag.ndsu.edu/publications/crops/early-blight-in-potato.

Last year, Banks was determined to find early blight lesions on tubers, spending hours checking a heavily infected field at the end of the season. In a stroke of good luck, she was unable to find the disease lesions. While early blight wasn’t a problem for much of the 2021 season, Banks found early blight on fields that were not yet top killed as of late August.

These are Rhizoctonia cracks surrounded by corky lesions of Rhizoc that look like netted scab.
I saw a few of these cracks on a Lamoka field. Sometimes black sclerotia are found on the cracks. pic.twitter.com/DNevZwNVgW

Heavy rains on Sept. 21 and 22 have left many fields waterlogged, as seen in this post from Nick Ploeg, potato producer in Alliston, Ont.: