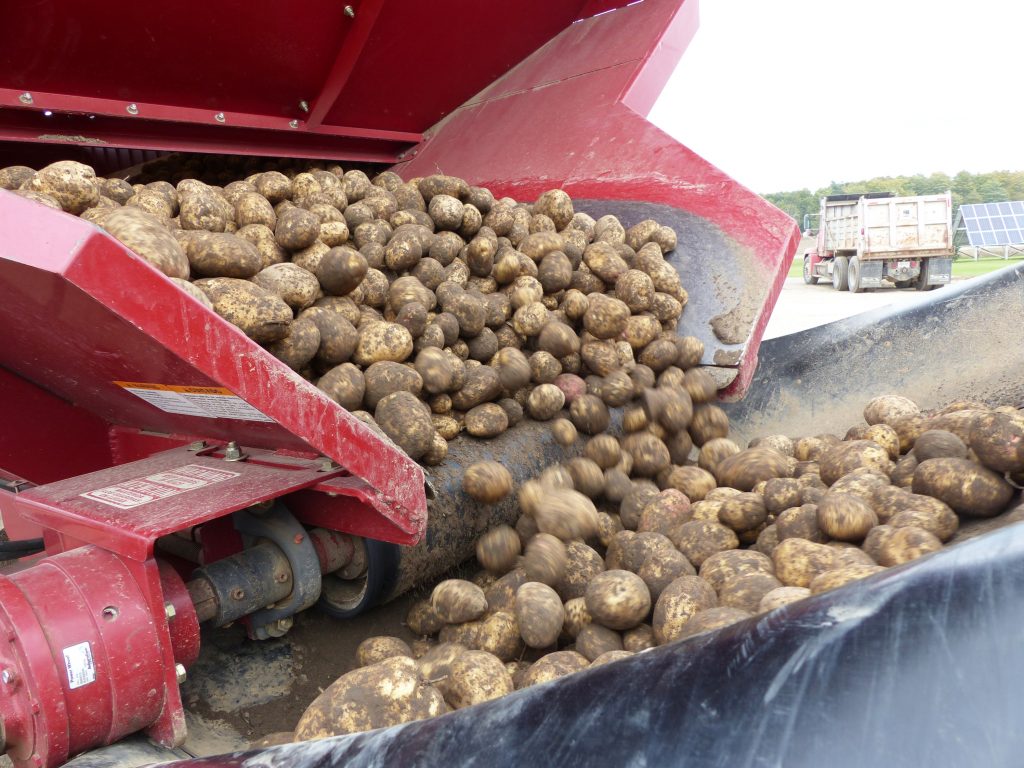 The potato crop in Canada is in varying stages of growth and/or harvest, according to the latest update from the United Potato Growers of Canada on September 18.

The production outlook is mixed after parts of Eastern Canada experienced one of their driest seasons on record while growers in Western Canada work feverishly to harvest their crop from the ground after Mother Nature’s early onset of winter prevented them from doing so last year.

Based on current information UPGC expected that Canadian production could be off by at least 6,000,000 hundred weight. If yields do not continue to add weight in late maturing varieties and the last harvested fields, production decreases could approach 8,500,000 hundred weight below last year’s crop. These estimates assume and hope that all of Canada’s 363,470 planted acres will get harvested. Last year growers were unable to harvest 20,230 acres in the country due to cold and wet weather.

Nothing is for certain until the last potato is in the bin, however this growing season may have changed supply availability in at least two sectors of the industry representing table and processing.

Table production is prominent in the four eastern provinces of Canada. Promising crops in the central region of Quebec and Ontario will not likely be able to cover off the expected decreases out of Prince Edward Island and New Brunswick.

Processors also will likely see tightened supply to meet their needs of recently expanded plants in Alberta and Manitoba, with an overall crop projected to be one of the lowest going back to 2011. In addition, fryers were already playing catch up to a market demand radically reduced by COVID-19 in the spring and then coming back sooner than expected this summer. Unfortunately, this occurred after raw product had moved to other channels and contracted volume for the 2020 crop was reduced across North America.

The growing season has been a disappointing dry one for most P.E.I. potato growers with the central growing region being particularly hard hit. Fields did receive an inch of rain on September 3, but it was too late for many early maturing varieties which had already gone down. The hope now, is that later maturing varieties such as Russet Burbank may be able to hold on as rain eventually appears this fall.

Industry sources feel the overall yield could be down anywhere from 15 to 25 per cent. As Canada’s largest grower, that could reduce production by 5 million hundred weight and make it one of the lowest crops since back in 2001 when the province experienced a major drought.

There has been some limited early harvest of table, chip, and processing potatoes. Some growers will begin harvest next week but for many, the week of September 28 will signal the roll of potatoes into storage.

Growing conditions have continued dry with no appreciable rain for the last three weeks. Early harvest on chipstock and field fry potatoes have been disappointing with growers reporting yields in the 200-250 cwt./acre range. Growers were reluctant to harvest much volume without additional incentive for reduced yields. Many fields had a reduced set which produced good size but lower tonnage.

The drought has taken its toll on varieties such as Goldrush and Norkotahs, but growers are still hopeful on Innovators and Burbanks. Initial predictions point to a reduction in excess of 30 per cent for this crop. A 5,000,000 hundred weight reduction would make it one of the lowest crops in the last 19 years. Industry appears to be reacting, with potatoes from neighbouring provinces moving in to accommodate the needs of fresh shippers. Harvest for most growers will begin the week of September 21.

The growing season was dry resulting in some lower yields on early varieties, but good moisture has been received over the last month. This should provide a decent finish for one of the better growing provinces in the country this season. Early harvest has been ongoing for some time. Growers report good size as a result of lighter set in some fields. Later varieties, particularly russets should bring up the yield average. Some growers started storing potatoes on September 14, but many growers will be going to storage in the week of September 21.

Although some of the early table harvest started off a bit light due to hot weather, fields now being dug are providing good yields. This is the second week of harvest for many growers, with good progress being made. Increased chip consumption and resulting contract volume increased planted acreage this spring. This along with strong yields should bring Ontario’s production up by 1,000,000 hundred weight over last year.

Excess heat during the summer has taken the top off the crop this year with yields down 10-12 per cent. Temperatures dipped below freezing on September 8 and again on September 17, so the yield potential has been halted on the later varieties. Trial results on some of the newer processing varieties such as Clearwater and Ivory have not responded favourably to the stresses in this growing season.

Overall yields in the province last year were 345 cwt./acre. At this time yields are estimated at 315-320 cwt./acre. Harvest progress varies with some growers finished and some growers starting.

Harvest conditions are good compared to last year’s horrific conditions, although they also bring in a few lumps from the dry soil. Growers are anxious to get their crop under cover but even with 100 per cent success, the additional 2,500,000 hundred weight over 2019, will likely still be short on supply needed to feed the JR Simplot plant expansion in Portage LaPrairie. The table crop in Manitoba is variable with some good and some lower yields. Quality is good although some producers are finding that skin setting seems slower this year keeping harvest progress on a tight schedule. The dry soil conditions also make for more difficult harvest conditions to prevent bruising in the fresh crop.

Even with hot and dry conditions, the crop appeared good through out the season. Harvest is underway with about one third of the crop under cover. Temperatures at Lucky Lake dipped to -6 C on the morning of September 8, so growers will be anxious to complete their harvest.

The potato crop has had its growing season stresses in Alberta this year as well. Most growers have been disappointed in their yields so far, however also hopeful that the harvest in the last couple of weeks will bring up the overall yield in the province. Crop is of very good quality with high gravities and size – just not enough of it.

Smoke from the California fires may be also inhibiting the photosynthetic process slowing bulking in the late varieties. In addition to a yield reduction, growers were also affected by processing volume cutbacks in the spring, reducing planted acreage by 2,000 acres. Early production estimates would put the crop 1,500,000 hundred weight below last year. Processing supply will be tight in the province as the new Cavendish Farms plant expansion in Lethbridge was counting on production to meet its increased needs.

The seed crop is looking good considering the acreage that was lost to drown outs in early June. Harvest is going well and reaching the 50 per cent mark. Growers are pleased with conditions and their progress compared to a year ago and should have all of their crop under cover in a couple of weeks.

The growing season in B.C. has provided for a high yielding crop which could exceed last year’s 325 cwt./acre. Harvest for the fresh market has been ongoing for some time and many growers have started storing in the last two weeks. Progress to date is estimated at 50 per cent with good digging conditions.