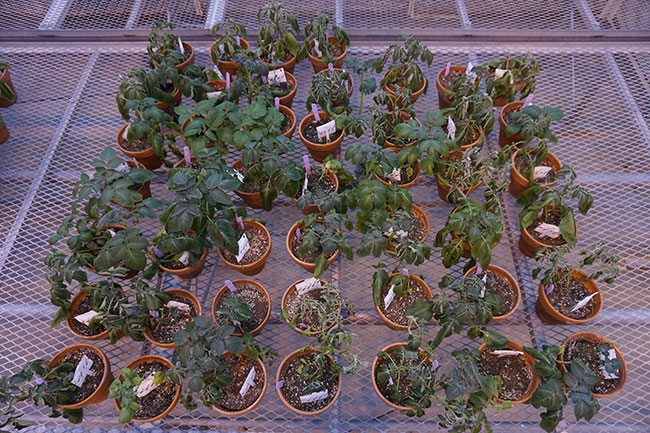 Potatoes – a sturdy, nutritious crop – can withstand minor dry spells, low numbers of insects, and modest disease pressure. However, when the pressure from any challenge to the crop’s successful growth occurs, growers need to take
action. In the case of prolonged dry spells, growers can irrigate the field. But the threat of climate change means there may be less water for irrigation and the crop will not be able to withstand the pressure of months or even weeks of drought. At the Agriculture and Agri-Food Canada (AAFC) Research and Development Centre in Fredericton, researchers are already considering a future with less water resources and how we can continue to grow potatoes under these changed conditions.

Dr. Keshav Dahal and his colleagues have completed preliminary research on potato response to drought stress. He says his research will give breeders information on where to focus their attention as they develop drought tolerant varieties.

Dahal and his team conducted their work in the controlled environment of a greenhouse. They identified drought-tolerant traits, such as water-use efficiency, that breeders could use in future programs. Beginning with 56 cultivars, the field was narrowed to six that had different responses to drought. Each difference was identified.

But the research has only just begun. “This is the beginning of my work,” Dahal says. “We need to do more before we can make recommendations to farmers.” 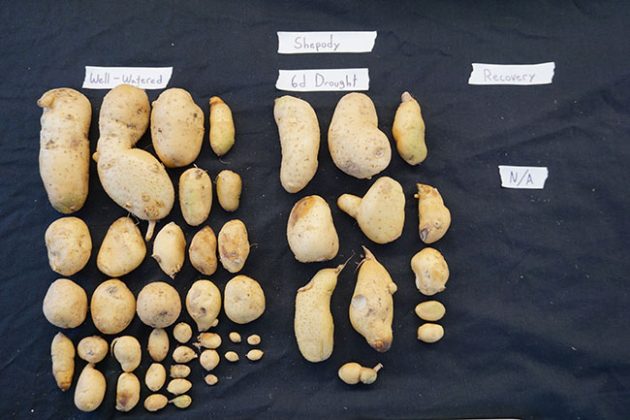 Findings to date
Dahal says the most notable discovery, so far, is the negative effect drought has on photosynthesis, a process for making carbohydrates that is essential for both biomass and tuber production. He says further examination of this factor would give breeders guidance on how to select for water-use efficiency.

“Drought-tolerant cultivars can survive easier because they are more water efficient,” Dahal explains. “They also have more protein in their leaves. We need to identify the specific proteins in the plant that cause greater tolerance to water stress.” He says, by identifying physiological, biochemical and molecular traits that resist stress, breeders will have information to make breeding for drought tolerance more efficient. When all the genetic drought-tolerance information is linked together, new cultivars with improved adaptability and productivity could withstand the stresses of climate change.

Breeders are currently using potato breeds that are known to be drought tolerant and then using them as parents to give new cultivars the same trait. However, Dahal’s work will identify the exact genetic sequence and strategies that a potato plant needs to be effectively drought tolerant. For example, he notes that drought-stressed plants tend to fold their leaves to minimize transpiration water loss from plants. However, the cost associated with narrower leaves is a reduction in photosynthesis, leading to reduced production. As a result, he questions whether efficient water use within the plant will ensure photosynthesis is not jeopardized.

Next steps
The research Dahal is doing would be difficult to replicate in a field situation. He is attempting to isolate the exact genetic markers and their sequence to ensure the correct genetic material is identified that could then be used to express the trait in new varieties.

“Some plants may have tolerance at different stages of development,” he explains. “We have identified some markers that can be used in building new cultivars.” But, he adds, it is helpful to understand how each one relates to drought, and what triggers one trait over another. “In the future, we are going to need drought-tolerant cultivars,” Dahal says. “We are already experiencing drought and it will become more serious. From a climate change perspective, we will have more frequent and severe droughts that will increase transpiration, which will cause a moisture deficit in the plant.” The result of the moisture deficit will be yield loss.

But, he believes, his work will give breeders the information they need to develop drought-tolerant potatoes that can maintain photosynthesis and tuber yield under predicted drought scenarios.

It’s possible that breeders will eventually be able to adjust popular varieties, such as Russet Burbank or Shepody, to make them more drought tolerant by incorporating the traits identified in Dahal’s research.

As warnings about climate change face the crop production regions of the world, Dahal is attempting to identify the genes potato breeders will need to ensure this important crop is ready for the stress of a warming planet’s growing seasons.