The Canadian Potato Summit armed producers with the tools and information needed to kick off a successful growing season. 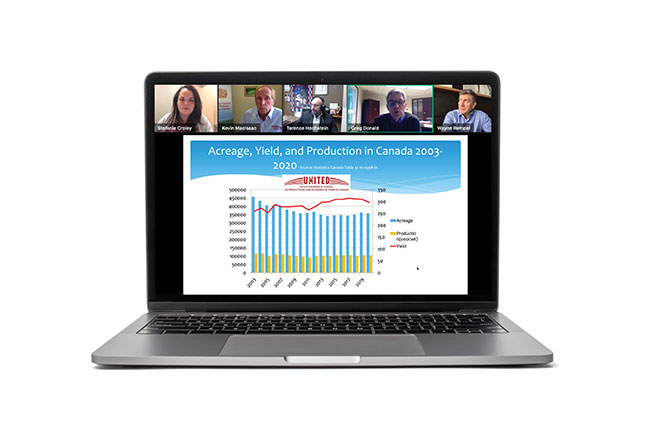 The Summit was developed by Potatoes in Canada to fill the gap left by cancelled potato industry events due to the COVID-19 pandemic. BASF Canada Agricultural Solutions, Eco +, Farm Credit Canada and Syngenta were gold sponsors for the Summit; Bayer CropScience and Tolsma USA provided silver sponsorships, and NutriAg was the Summit’s bronze sponsor. The Summit was also supported by Ontario Creates.

The latest on CanPEDNet
Dr. Mario Tenuta and Dr. Dmytro Yevtushenko kicked off the Summit with an update on the activities of the Canadian Potato Early Dying Network (commonly referenced as CanPEDNet), formed in 2019. Tenuta, the project’s lead researcher and professor of applied soil ecology at the University of Manitoba, and Yevtushenko, research chair in potato science and associate professor at the University of Lethbridge, are two of the 16 researchers involved in the nationwide CanPEDNet.

Potato Early Dying (PED) complex causes premature plant senescence – in other words, the plant fails to reach maturity and eventually dies. This can have a significant yield impact. It’s also a very difficult disease to manage, as it is caused by a complex of pathogens and no potato cultivars currently registered in Canada are fully resistant or tolerant to PED.

Verticillium dahliae, a soilborne fungus, is the main pathogenic cause of PED; V. albo-atrum can also cause PED. The severity of V. dahliae infections is amplified when combined with the root lesion nematode Pratylenchus penetrans. On the Prairies, P. penetrans has not been found, but 30 per cent of fields contain P. neglectus instead.

From trials of new commercially available PED control products, Yevtushenko indicated that, while some lowered levels of Verticillium spp. or P. penetrans following application, soil pathogen levels often recovered later in the growing season. Soil treatments could significantly improve yield, but this is dependent on pathogen levels in the soil. Yevtushenko also highlighted the importance of soil testing to understand what pathogens are present and in what quantity.

Tenuta discussed several Network projects. One involves a survey of Verticillium spp. and root lesion nematode species and population levels, and how they relate to PED and yield. Another project is examining the effects of other soilborne pathogens associated with PED, including Fusarium spp., Pythium ultimum (a cause of root rot), and Rhizoctonia solani (cause of black scurf and stem canker).

Difficulties created by the COVID-19 pandemic negatively affected the research activities of CanPEDNet. Tenuta hopes that the 2021 growing season will allow the team to resume research trials on a more substantial level.

Tenuta also emphasized that, while no varieties are fully PED-resistant or tolerant, different potato cultivars have different levels of susceptibility. As the late tuber bulking stage is when potatoes are most susceptible, Tenuta said, “The earlier you harvest your potatoes, the less you will see of a yield suppression.”

The pandemic also affected research activities at the University of Guelph. Currie said research was suspended at the university in March and April; after that, researchers were required to request special permission with a detailed plan for safe working conditions in order to conduct research in 2020. While the Potato Research Program did secure permission, their activities were reduced.

Part of Currie’s presentation was dedicated to early generation selections. She emphasized that the selection process is stringent and most varieties don’t get chosen – a 10 per cent selection rate of all tested tubers is generous. Initial selections are made visually in the field. Uniformity of size and shape are paramount, and overall attractiveness certainly plays a part, too.

State of the industry
A quartet of potato industry representatives rounded out the Summit, providing an update on the state of the industry heading into the 2021 season. Kevin MacIsaac, general manager of the United Potato Growers of Canada, began the panel with a brief presentation on industry trends. According to data from Statistics Canada, potato production is down almost everywhere in Canada, with a 1.4 per cent average decrease for the country. Many acres that were intended for potatoes in 2020 were cancelled at the last minute due to shifting demand caused by the pandemic. Many growers were planning to plant more acres following the dismal 2019 season and harvest.

Following that, MacIsaac was joined by Greg Donald, general manager of the P.E.I. Potato Board, Terence Hochstein, executive director of the Potato Growers of Alberta, and Wayne Rempel, CEO and president of Kroeker Farms. In discussing the challenges faced by the potato industry, the four were quick to commend growers on stepping up and responding quickly to changes in potato consumption early in the pandemic, when it was difficult to keep potatoes on grocery store shelves. Donald gave kudos to producers for their resilience and adaptability. However, they each cautioned producers not to treat this short-term spike in retail consumption as a guide for what to plant this coming season. MacIsaac in particular emphasized the importance of treating production as a marathon; he encouraged producers not to get caught up in speculating and to plant based on what you know from experience and solid data.

The Canadian Potato Summit was recorded and is now available to watch at potatoesincanada.com/summit. You must be registered to access the recording, but registration is free and still open. By registering, you will also have access to additional on-demand videos with Agriculture and Agri-Food Canada research scientists Dr. Judith Nyiraneza (AAFC-Charlottetown) and Dr. Haley Catton (AAFC-Lethbridge) on winter cover crops and wireworm control strategies, respectively.