Features Agronomy Storage
Bouncing back from a tough harvest

It’s not about how you start, it’s how you finish – and this potato season is not over yet. Canadian potato producers endured a tough harvest season, especially Prairie and east coast producers who were faced with abnormally cold wet weather that delayed harvest until early November.

January 9, 2019By Potatoes in Canada staff 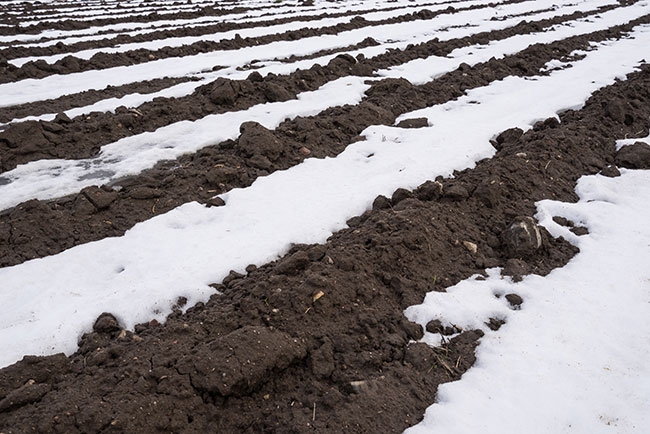 It’s not about how you start

“I don’t even know what normal is anymore,” starts Greg Donald, general manager of the P.E.I. Potato Board. “Because we often say ‘it wasn’t a normal season’ . . . but some of the most senior in our business say they’ve never seen a fall on P.E.I. like this before.”

The cold weather crept up quick on potatoes that were still trying to grow from an unusually dry summer. In addition to the cold weather, excessive rains limited the amount of consecutive days producers had for harvest. By the end of the season across Canada, approximately 15,000 acres of potatoes had to be abandoned and left in frozen ground.

Donald says it’s difficult for producers to have prepared for these harvest conditions because the biggest factor was the weather. “Unless you can figure out how to control the weather, it’s difficult.” Not having ideal harvest conditions complicate the storage season, but for most producers it wasn’t a choice. “Early in the harvest, you watch the weather, you want to make sure it’s not too wet, the temperature is right, all that, and then as it got later into the season and it became obvious everyone was behind, you have no choice but when you can go,” Donald says.

Lorraine MacKinnon, P.E.I. potato industry co-ordinator with the Department of Agriculture and Fisheries, acknowledges the difficult harvest season and how it’s not a nice position to be in now to start contemplating potential issues going forward with storage. However, MacKinnon says certain storage “red flags” have been raised during harvest that producers can directly mitigate.

What’s on the radar?
Harvesting in cold, wet weather isn’t ideal, but it’s better than the alternative. MacKinnon predicts growers will deal with more physiological disorders in storage as well as diseases. Physiological disorders include chilled or frozen potatoes, water-soaked potatoes and rough handling at harvest. Some producers have also reported jelly end rot, which isn’t related to a disease, but rather is a potato’s natural response to the different weather patterns during the season. These physiological disorders can break down into disease, especially since bacteria will thrive on damaged tissue, and bruised potatoes serve as entry points for disease in storage. MacKinnon lists several diseases to watch out for as potential storage issues: pink rot, bacterial soft rot/blackleg, pink eye and Pythium leak.

Khalil Al-Mughrabi is a pathologist at the Potato Development Centre in New Brunswick and emphasizes that water rots, such as pink rot and Pythium leak, flourish during conditions of frequent and excessive rain, especially in low spots or poorly drained areas. “It is essential to know you cannot cure tubers of diseases, but you can minimize storage losses from tuber infections,” Al-Mughrabi says. “Storage rot is difficult to manage, but there are many strategic measures that help limit the spread of pathogens from diseased to healthy tubers.”

MacKinnon notices producers have come a long way. “They’re more diligent and better managers of potato storage than they would’ve been a decade ago. I’m just giving them gentle reminders that they want to keep in mind.” Less than a decade ago, Island producers faced tough storage conditions that resulted in the discarding of potatoes or the losses of entire warehouses. Since then, many have taken it upon themselves to learn the ins and outs of storage management best practices. One bin can hold several million pounds of potatoes, and some or all of that could all be at stake if it’s not monitored properly. “The problems that exist can compound if they’re not addressed . . . The financial loss could be tens of thousands; or even hundreds of thousands of dollars depending on the extent of the problem,” MacKinnon says.

Next steps
To avoid the spread of diseases, Al-Mughrabi lays out four post-harvest steps for growers. The first is to grade out infected tubers as much as possible before placing tubers in storage. Secondly, keep tubers cool and as dry as possible during harvest, loading and transit. In storage, the crop should be ventilated with high volumes of air at low humidity until it’s dry. Thirdly, store infected tubers separately from healthy lots and place them in the front of the storage. Finally, lots of potatoes with significant amounts of disease should be marketed as soon as possible because they do not store well.

As for general storage, Al-Mughrabi boils it down to one key point: “Temperature is the single most important factor in the keeping quality of stored potatoes.” The majority of storage diseases are partially or completely inhibited by storage temperatures below 7.2 C, but this varies depending on the variety, so growers are advised to consult their local potato specialist. At temperatures above 10 C, the growth and development of disease organisms increases dramatically, increasing the risk of total breakdown. Al-Mughrabi generally advises growers should avoid temperatures above 10 C for long-term storage. He also notes the hatching of flies is inhibited below 10 C. As a result, the presence of flies during warehouse checks indicates that the temperature is too high somewhere in storage, and breakdown may become a problem.

MacKinnon says in addition to daily monitoring, the priority for growers right now who find problems should be to dry the potatoes in storage to prevent the spreading of problems. Drying can be done through dehumidifiers and heaters, and by bringing in fresher and drier air from outside. Using a heater can help, according to MacKinnon. “It seems sort of counter-intuitive, to add heat if you’ve got rotting plant tissue, but when you add heat in a warehouse it triggers their automatic system to bring in fresh air from the outside and that air is drier and that will help you dry the pile much quicker.” However, be mindful that kerosene heaters can have a negative impact on potato colour.

Monitor daily
When it comes to monitoring, there are four handheld tools that help during warehouse checks: a psychrometer to check relative humidity, a simple thermometer for inside and outside of storage, a carbon dioxide sensor and an air flow meter. Ventilation is very important: “Make sure that the ventilation controls and dampers are functioning correctly, especially during very cold weather when the danger of ice buildup is greatest,” Al-Mughrabi says.

He also adds early detection of soft rot is now possible with the use of infra-red thermometers. These devices, which look like radar guns, can be used to measure temperatures at the top of the pile. Areas of potential breakdown will show up as “hot spots,” and will often appear as much as three weeks before other symptoms are noticeable.

Another not commonly used gadget is a thermal imaging camera. “I think this year is when it’s going to come in handy,” MacKinnon says. By scanning a pile of potatoes, the camera – which can be found in hardware stores – will detect the temperature of the pile and where there are differences. “You can tell where there’s warmer potatoes sitting next to colder potatoes, which leads to condensation, and that leads to problems over time.”

“The number one piece of advice to give to growers is to be very diligent in monitoring the warehouses, checking them daily, and use your checklist to make sure things are going okay,” MacKinnon says. “There have been recent power outages which can also disrupt the system in the warehouse, so keep that in mind as well.” She also advises growers keep a log of data by taking weekly pictures of the pile so they can compare progress.

Despite the difficult harvest, there is room to bounce back. Greg Donald, with the P.E.I. Potato Board recalls countless of stories of P.E.I. growers helping other growers. “They’re the best at what they do and in tough conditions they shine,” he says.

MacKinnon adds it travels beyond just growers. “You could tell that members of the general public were really feeling their pain; they knew they were having a difficult year, and I really feel like there was a lot of sympathy out there amongst neighbours within the community, even people who may not even be associated with the potato industry.”

To finish strong from a harvest season that won’t be forgotten, check up on stored potatoes and check in with fellow growers.