Most provinces are reporting lower than average yields for the 2018 growing season, according to the latest crop report published on Oct. 5 from the United Potato Growers of Canada. The only province reporting an increase in yields is British Columbia with a modest increase in yield. 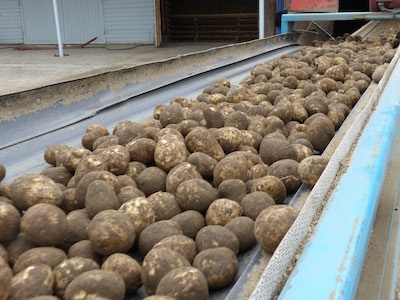 Lamokas going into storage as harvest is underway in Ontario.

Prince Edward Island
The summer of 2018 has been extremely dry, and poor growing conditions continued in the month of September. Some early variety fields had started to show their age early due to stressful growing conditions. Tuber set appears to be down and sampling throughout the season showed the crop to be almost two weeks behind normal. The crop needed an open fall with favourable growing conditions and extended time to allow late season varieties to bulk up. Unfortunately most areas of PEI experienced a very early vine killing frost frost on Sept. 24 with temperatures dipping below 0 to -1 C. Growth in many green fields of Russet Burbank was halted. Rain finally came in the last week but it was too much, too late. Some areas received over 100 mm. Yield and quality is expected to be quite variable across the Island. It is still too early to get a handle on overall yield, however it will definitely be below average again this year and less than last year’s yield of 284cwt./acre. Main harvest has only been in progress for two days after being stalled by rain this week so at press time about 10 per cent has been harvested. Shipments of new crop are going at a similar pace with prices above last year.

New Brunswick
After a hot dry growing season yields appear to be coming in below last year. Tuber set is down providing fairly good size on the earlier varieties, but also lower tonnage. Some fields with a higher set do have more tonnage. The quality does not seem as good as last year, with issues of hollow heart, off type, and smalls. The higher dockage is also a contributing factor to overall lower yields. Early Shepody harvest has been disappointing with hollow heart dockage. In a reverse pattern this year the lower St John River Valley received better moisture levels than the Grand Falls area and as a result yields appear higher in Carleton County than Victoria County. Russet Burbank quality seems a little rougher and hollow heart is prevalent. Size profile also appears smaller on Russet Burbank, as the crop needed additional rainfall to complete tuber bulking. New Brunswick also received early freezing temperatures on Sept. 24 with weather stations in Grand Falls reporting -6.5 C and Woodstock reporting -4 C. Last year’s yield came in at 294cwt./acre – this year’s appears to be lower with a very wide range of reported yields. At press time, harvest is about 45 per cent complete.

Quebec
The potato crop in Quebec has experienced a hot and dry summer, which has lowered, both yield and size profile compared to a year ago. A killing frost occurred this week in the Saguenay and Lac-St.-Jean area eliminating any further growth. In general, the size profile is smaller and percentage of jumbo or oversize tubers is not expected to exceed 25 per cent. Although some rain was received in September, it came too late for varieties like Goldrush resulting in a smaller size. Quebec growers have considered asking the Canadian Food Inspection Agency (CFIA) to extend the minimum size grade requirement from 2.25 inches to 2-inch minimum. Some non-irrigated regions have now experienced two dry seasons. Areas like Bas-St-Laurent are plunged into a catastrophic situation and will need to ask the government for help through the AgriRecovery Program. Other regions such as Lac-St-Jean have yields equal to, or better than, last year. Last year’s yield was 306 cwt./acre. An estimate at this time would be 285 cwt./acre, a decrease of 7 per cent. Harvest as of today is 50 per cent complete in the eastern and northern regions and reaching 75 per cent in the more Southern Regions.

Ontario
The hot summer temperatures (both night and day) reduced yields even in irrigated fields. Processing yields range from below average to average. A few cases of heat necrosis and/or calcium deficiency due to drought and heat stress have been reported. Harvest of the processing crop into storage began on Sept. 10 with favourable conditions allowing a non-stop harvest and storages filling fast. However fall arrived at the end of September and the
harvest has been slowed by rain and cool weather. The weather outlook for the beginning of October is poor with rainy and cool weather expected. Process acres are 62 per cent harvested (about 12 days behind normal) and soil is wet. The hot summer temperatures also affected the yield of the fresh market crop, and the early crop has been cleaning up in an orderly manner with good quality. Some fresh growers are done harvesting while others are at the 60-75 per cent mark.

Manitoba
Harvest in Manitoba has been one of the most challenging ever. Following a hot dry summer everything changed during the second week of September. Rain began and the temperature has been locked in a pattern of being 8 to 10 degrees below normal. Harvest into storage has been delayed as rain and wet conditions prevent good progress. Rainfall amounts ranged between 4 to 6 inches without sunshine or warmth to help conditions. The first hard frost of -6 C on Sept. 29 resulted in minimal tuber damage on green fields but did nip potatoes close to the surface on others. The Oct. 4 overnight temperatures of -9 C damaged some areas that lacked in snow cover. The two week forecast continues to call for single digit temperatures with rain and snow. Progress varies from farm to farm with a handful completed to some at less than 30 per cent harvested. Overall estimate is 70 per cent completion. The yield is variable but overall surprising. If harvest can be completed and storage issues avoided, supply will be adequate for processing needs.

Saskatchewan
After a hot, dry summer in Saskatchewan the weather has moved to another extreme. The first killing frost was on Sept. 4 however temperatures dropped as low as -11 C earlier in October. Snowfall may have prevented tuber damage, however, growers were not so fortunate with another day reaching -10 C with no snow cover. Harvest is stalled and, at press time, many producers have only one third of their acreage harvested.

Alberta
Like other western provinces, after a hot dry summer, growers are challenged to finish their harvest operations before abnormally cool and snowy conditions set in. Harvest has been stalled, with snowfall amounts at Calgary airport reported at 35cm on Oct. 2. Low temperatures of -8 C in the Edmonton area and -4 C in the Taber area have been concerning as well. Yields on the crop already harvested to date, have been average to slightly above, so far. The processing crop is about 85 per cent harvested. The seed crop is average at best with a smaller size profile. Seed harvest is about 75 per cent complete.

British Columbia
The harvest started out a bit dry, but an excellent period of harvest weather allowed about 80 per cent of the crop to get harvested. However conditions changed in mid-September with heavy rain moving into the province. The last 10 per cent of the acreage will be a struggle to harvest with very wet soil conditions. Yields have been good with 300 cwt./acre an estimate at this time. This would be above last year’s 285cwt./acre.