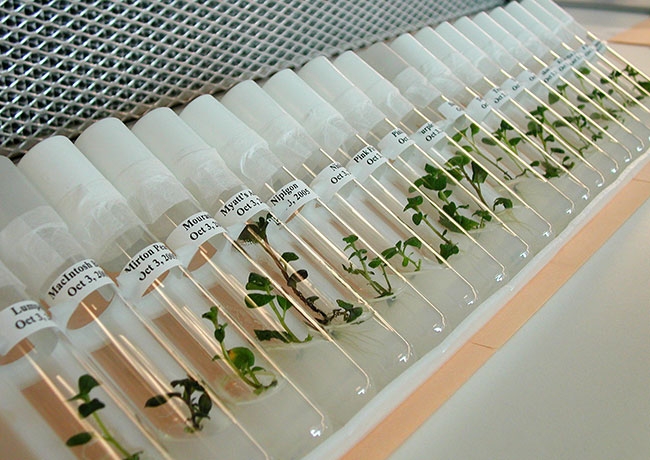 The gene bank collection focuses on varieties and lines most important to Canada’s northern climate. It includes both heritage and modern-bred accessions as well as unique genes found in wild populations, in exotic varieties, and via Canadian scientists’ breeding initiatives.

“It’s very important to preserve all unique traits for future generations,” says CPGR’s curator, and research scientist Benoit Bizimungu. “We collect everything that may have traits of interest.”

The gene bank’s collection encompasses traits that are recognized as important today and those that may prove vital tomorrow.

“We don’t know what is ahead. New emergent pests and diseases, drought, climate change, soil changes, or other unknown changes may come. If you don’t keep your gene resources wide and broad enough, you won’t have the diversity to address those challenges,” Bizimungu says.

In addition to preserving priority genes long into the future, the gene bank also facilitates access to genetics for research occurring in the here and now.

“The genetic resources collected here are available to any researcher. When someone starts a breeding program targeting specific traits and doesn’t have anything in their own collection, the first thing they do is call the gene bank. My role is to recommend and assist,” Bizimungu says.

The gene bank’s genetic collection is particularly useful for genomics research. Potatoes are typically tetraploids – containing four sets of chromosomes, rather than diploids like most other plants. Additional chromosome sets result in a “blurring” effect, which makes genomic discovery complicated. However, certain varieties and wild relatives of potatoes, particularly those from South America, have differing numbers of chromosomes. Some varieties have as many as five or six sets of chromosomes; others have just two sets. Researchers interested in genomics often turn to the gene bank not just for specific traits, but also for specific traits contained in cultivars with fewer chromosome sets.

Alongside preserving the living library, Bizimungu and his gene bank colleagues conduct their own research on the collection, searching for new traits that may be hidden inside old varieties.

“Many old varieties were grown with minimal inputs. So, those old varieties may have some useful genes for the future,” he says. “For example, maybe they require less fertilizer, or maybe they are more resistant to stresses. Especially now as we move towards more resilient agriculture, those kind of traits would have real value.”

In fact, most varieties that offer disease resistance today come from Canada’s gene bank accessions or from the U.S. potato gene bank, Bizimungu says, since those collections provide the “starting material” for potato breeding efforts by scientists across North America.

Canada is one of 194 member states in the United Nations’ Food and Agricultural Organization (FAO). As a signatory of the FAO’s International Treaty on Plant Genetic Resources for Food and Agriculture, Canada agrees to the “conservation and sustainable use of all plant genetic resources for food and agriculture,” as well as the “fair and equitable sharing of the benefits arising from the use of these genetic resources.” In practice, this means Canada agrees to abide by the FAO’s rules about how plant genetics must be handled, and to freely share all of its plant genetic resources with scientists from around the world.

“No one country is self-sufficient in terms of genetic resources. We depend on each other,” Bizimungu says. “Global food security is a worldwide effort. We receive requests from scientists from around the world to access our germplasm for specific traits. We are open to providing genetic material to anyone who requests it.”

Because potatoes produce tubers rather than easily storable seeds, maintaining genetic resources over the long-term is more complicated with potatoes than other crops. In addition to curating potato tubers, Bizimungu and his team grow live tissue samples: tiny plantlets grown in slow-growth media in temperature-controlled growth chambers. Every six-to-eight weeks, the seedlings are replicated into new media to allow additional growth. The gene bank also keeps a collection of “microtubers”: tiny tubers grown in test tubes that last for up to one year.

In the summer, the gene bank takes cultivars of every variety and grows them out in field conditions.

“A very important part of our work is collecting data. We characterize [the varieties] every year when we grow them out, documenting traits of interest through publications or on our website,” Bizimungu says.

“It’s exciting to see how the public has a very strong interest in the gene bank. People understand the role of banking in their day-to-day lives. When we describe this collection as a way of saving for the future, the message is very well received,” he says.

“Everyone is affected by what we do here. Without genetic resources, our food security would be compromised. Potatoes are one of the most consumed vegetables in the world. It’s important as a crop but also to the economy. Preserving the foundation of our genetic resources is very important.”