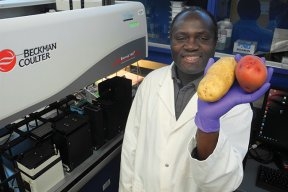 The team’s first focus is on disease and nematode resistances that are difficult or expensive to screen using traditional methods; next come processing traits like specific gravity and chip colour after cold storage. Eventually, his team will look at agronomic traits.

These priorities are not necessarily based on the researchers’ preferences, but rather on the availability of genetic markers – in other words, markers linked to disease or pest resistance are easier to find because those traits tend to be genetically simple. Traits linked to processing qualities, such as chip colour, are a little more complex. Agronomic traits, such as yield, are more complex still, as they are under the influence of multiple genetic effects.

Bizimungu is a research scientist and a lead on a new project that will use DNA sequencing technology to improve the efficiency of potato breeding projects.

Supported through AAFC peer-review funding, the project is connected to the Integrated Potato Research-Development and Technology Transfer project, which runs from April 2015 to March 2019.

“What we are looking for in this project is the improvement of breeding efficiency, and breeders have always relied on many tools to develop a new variety. This new equipment is allowing us to genotype, to determine the sequence in key specific genes of interest, very rapidly, and to identify the desirable variants of genes underlying important traits.”

The new technology in question is a real-time polymerase chain reaction (PCR) machine that works as a “high-throughput genotyping platform” to help researchers screen for variants of DNA linked to traits of interest in large numbers of samples of genetic material.

“Most of the progress in large-scale genetic polymorphism analysis and related instrumentation is coming from biomedical research in human genetics, but we are slowly adopting it in plant research,” Bizimungu explains. Most real-time PCR machines can run 69 reactions, but this one has the capacity to run 1,536 reactions in minutes, representing 16 times more capacity than most other machines. The ability to screen so many samples at once is particularly key for potato breeding programs, where researchers are used to growing out thousands of samples in the field and laboriously combing through them looking for expression of key traits.

High-throughput genotyping means all of the samples can be screened in the lab, whittling down the number so only promising candidates are trialed in the field later on.

“We’re able to fast-track traits to improve varieties and identify superior genetic combinations earlier in the breeding program than we would using conventional screening methods only,” Bizimungu says.

A collaborative approach
Fredericton researchers are not alone in this sophisticated approach to potato breeding. Bizimungu says the team is working in collaboration with other researchers developing markers both in Canada and internationally. “This lab is mostly for rapid routine screening, and we integrate new markers as they are developed by collaborators,” he says. “We try to keep ahead of the new developments.”

In particular, Bizimungu’s lab is working with scientists and breeders from the United States. Many of the advances they are able to take advantage of are the result of a four-year United States Department of Agriculture project called the Solanaceae Coordinated Agricultural Project (SolCAP), which ran from 2008 to 2012. SolCAP aimed to translate genomic advances in other fields to American tomato and potato breeding programs; all of its results were made publicly available.

“The project resulted in excess of 20,000 genome-wide sets of single nucleotide polymorphism (SNP) markers,” Bizimungu says. “And we’re just starting to make good use of some of those.”

How does the process work? Using already-identified markers linked to traits of interest, the team develops primers to target those markers in samples using the real-time PCR machine. Samples that include traits of interest could end up in breeding programs later on.

The Fredericton team’s approach for using marker-assisted selection was to start with simply inherited traits like disease resistance. “In terms of applying this technology, we started with the markers that are available,” Bizimungu explains. “We started with disease resistance because these are under simple genetic control, but we expect more progress is being made for other, more complex traits as well.”

Bizimungu’s team has already started applying these new disease resistance traits to the breeding program. Later this year, they hope to start incorporating processing traits, which Bizimungu says are more complex, and can be affected by environmental factors.

Agronomic traits are more difficult to apply in breeding because they are so much more complex, relying on a wide variety of factors. But Bizimungu says as researchers find more information on genes and genetic variations involved in those traits, they can try to target those traits as well.

“With this instrument and markers in general, one of the advantages is that it reduces the size of a breeding population by culling out undesirable types in early generations to enable a more thorough assessment of fewer clones in field evaluations,” he says. “So it improves efficiency.”

It will take a little while before producers see these new traits at work in the field, but Bizimungu says the new technology will speed up the process considerably.

“Breeding is a production line – something comes out every year and something is fed into the pipeline every year. The beauty of this high-throughput system is that it brings these markers into the first year of breeding. We’ve never been able to do this before,” he says.

“In the end, there will be less material going into fieldwork, but the fieldwork we do will have a greater chance of being successful.”