More acres of spuds could be produced in Canada if scientists could develop tubers with hardier genetics, a challenge that has been studied by Dr. Rickey Yada since 1998. Yada is with the Department of Food Science at the University of Guelph, and is the scientific director of a Pan-Canadian research network dealing with foods and biomaterials, based at the university. 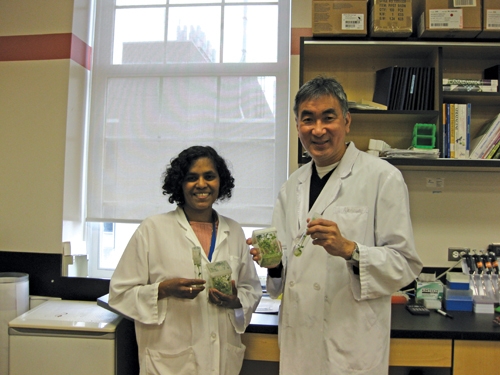 Dr. Rickey Yada More acres of spuds could be produced in Canada if scientists could develop tubers with hardier genetics

One of his research areas is product quality, particularly in French-fries. “Potatoes, as rugged as they may seem, are quite sensitive to low temperature storage,” Yada says. “We refrigerate most horticultural commodities to extend shelf life. We normally store potatoes at 10 to 12 degrees C, and they end up sprouting early. If we could store them at four degrees, it would change the industry.”

Storage is a problem for Canada’s chipping and French fry industry. To maintain a constant and consistent supply of potatoes during the winter months, tubers must be stored and refrigerated to a temperature below 10 degrees C. Unfortunately, at that same temperature, some of the starch in the potato is converted to “free” sugars, including sucrose, and to reducing sugars, including glucose and fructose. With that conversion of sugars, frying or cooking tends to result in a dark brown colour. This is known as low temperature sweetening, and can be costly for the chipping and frying industry.

In response, processors not only store potatoes at 10 to 12 degrees C, they often treat them chemically with a sprouting inhibitor. Potatoes are also imported from the US, ensuring a year-round supply for the processors and allowing them to use Canadian product during the domestic season, and then use imported product when those Canadian supplies run out.

Oops to Wow!
As a young biochemist 25 years ago, Yada was brought in to assist Robert Coffin, Potato Breeder of Ontario. Coffin now works with Cavendish Farms. “He wanted to know some of the biochemical factors that influenced potato chip quality. It became a good partnership,” Yada says.

One day, in the late 1980s or early ’90s, some of Coffin’s processing potatoes in storage were chilled a bit too much. They had been refrigerated at four degrees C. Yada says, “We were evaluating them for quality and knew the temperature effects. Coffin goes, what the heck, let’s see what happens anyway. We expected a brown chip to be produced. Lo and behold, this potato variety ND860-2 produced a light-coloured chip!”

That became the kickoff for a program still underway, to transfer the characteristic into lines suitable for mainstream production. For the first time in 2010, Yada says, field trials will begin with a white potato that may be suitable for the processing industry. It will take at least three growing seasons to determine if the new character trait is stable enough for release as a new type of potato.

Agriculture and Agri-Food Canada is co-operating in the research with the University of Guelph.

Background
The potato with the ability to stay “starchy” rather than become “sweet” posed formidable problems for breeders. “It was a wild potato with a survival mechanism,” Yada says. “It produces potatoes only just a little bigger than a golf ball.”
The variety, ND 860-2, originated in North Dakota. It is believed the low temperature sweetening resistance has something to do with its parents’ origins in the cold, high-altitude regions of the Andes Mountains in South America. The research team then came up with a simple question: what does it take to prevent low temperature sweetening in potatoes?

That was the start of an exhaustive 12-year biochemistry expedition. “The answer is so complex!” Yada says. “The potato, in its infinite wisdom, says there are many paths. We think we’ve found probably one of the main factors, but we won’t say the only factor. The potato is smart enough to have alternative strategies to produce carbohydrates.”

Yada, his research group and research associate Dr. Reena Pinhero have worked to understand why this particular variety exhibited low temperature sweetening resistance. What they determined is the possibility that as many as three anaerobic respiratory enzymes were involved in converting the sugars into other compounds, thus reducing the browning effect.
Then, they gradually isolated the DNA that would express the primary anaerobic enzyme, pyruvate decarboxylase.
“With modern molecular techniques, it’s become a lot easier to identify a gene,” he says. “And, we’ve been lucky.”

It’s the equivalent of cutting the ‘right’ short piece of genetic ribbon from a single gene in the Andean genetics, placing it into the equivalent place in a domestic potato, and getting the modified genetics to produce spuds.

The gene-splicing still qualifies as cross-breeding because all of the genetic material is from a single species. “It’s a bit of hit-and-miss. You do a number of attempts, with artistry, hoping you get the desired properties.”

The initial target potato is a standard white-fleshed, late-season line, Snowden, that has been around the industry since 1997. It is favoured by chipping companies and grown in several provinces. It has good storability, as cool as 7 degrees.
The first gene-spliced plants were grown in flowerpots in a greenhouse in 2009. “We’ve got a transformed potato and now have mini-tubers, around the diameter of a quarter,” he says. “Now we’re going to do some field testing to see how stable the trait is. The proof is in getting the same trait, year –after year.”

If the first year is successful, new plots will be tried in other potato-growing regions in 2011. However, he adds, getting the genes into Canadian potato varieties with the correct combination of high-yield and good agronomics is a process that still could take 10 or 12 years.

Implications
Cold-tolerant, sweetening-resistant potatoes have several implications. Producers may be able to extend the growing season a bit later in the fall. Risk of low temperature sweetening before harvest could be reduced. And producers may benefit from greater demand for Canadian potatoes.

Processors could also store potatoes year-round at low temperatures, reducing the need for potato imports to Canada.
Consumers may have a better-looking and tasting chip or fry, free of chemical inhibitors and without the added cost of potato imports.

Yada says, “If we could store the domestic potato crop at refrigeration temperatures, we would probably have potatoes that we could use for a longer period. Low temperature restricts sprouting naturally, without sprout inhibitors.”