Following a five-year study, an AAFC researcher believes he can reduce yield decline. 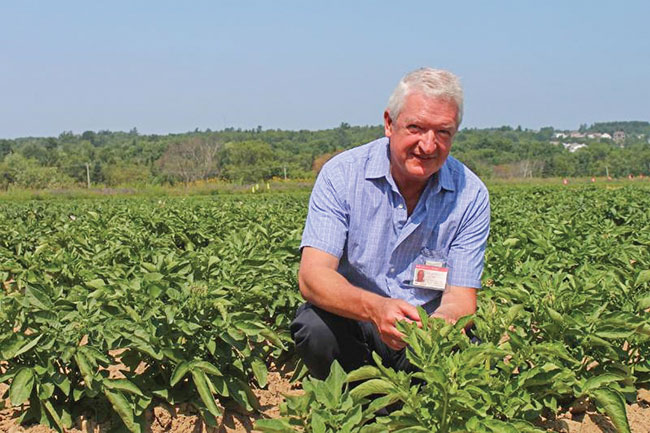 Bernie Zebarth, a soil scientist with AAFC in Fredericton, was approached by growers wondering why yield was declining despite all the management adjustments growers were making. Photo courtesy of AAFC.

In many parts of Canada, potato crops are big money earners. For some growers, rotation crops are grown to manage disease, minimize resistance to products, eliminate the tolerance diseases and pests develop to controls and to keep the soil healthy for potatoes. Often rotation crops don’t offer the same rate of return as a high yielding potato crop, but growers believe they are necessary to ensure the health and productivity of the potato crop. However, in Eastern Canada, yields began to decline despite all the management adjustments growers undertook.

In 2013, growers approached Bernie Zebarth, a soil scientist with Agriculture and Agri-Food Canada (AAFC) in Fredericton to see if he could identify the problem. Over the ensuing five years, he has reached some surprising conclusions.

“We looked at a series of options,” Zebarth says. “We wanted to determine what is limiting yields in the first place and then decide what would be the best solution.”

What the examination showed was that soil quality was a big factor in the ability of a potato crop to thrive and produce quality tubers. In particular, the intensive system used to grow potatoes results in declining soil organic matter.

“Soil organic matter is like a bank account,” Zebarth says. “You have to keep a positive balance to have healthy soil.”

“Soil organic matter is like a bank account,” Zebarth says. “You have to keep a positive balance to have healthy soil.”

The intensive tillage practices used in potato production, short potato rotations, and increased risk of soil erosion, coupled with the low organic matter inputs from the potato crop, all deplete the soil organic matter bank account. Knowing the methods by which potatoes are produced, Zebarth began looking for ways to manage the crop differently.

Of course, increasing rotation is an excellent first step, he says. Adding more crops into a rotation and lengthening the rotation cycle increases the soil organic matter that is so important to potato production. But Zebarth has some fine-tuning for growers to consider when planning a rotation.

“Consider a nurse crop in the spring that is planted at the same time as the potatoes,” Zebarth recommends. “This crop protects the soil until the potatoes get established. Most choices for a nurse crop will provide cover within a week or so. Consider spring barley, oats, or perhaps fall rye.” The plan, he adds, is to reduce erosion, but a nurse crop will also add organic matter.

“Also, consider a fall-seeded cover crop to protect the soil over the winter period. The goal is to keep living roots growing in the soil as much as possible to keep the soil biologically active,” Zebarth adds.

The goal is to keep living roots growing in the soil as much as possible to keep the soil biologically active,” Zebarth adds.

“The big surprise was how prevalent the soil-borne diseases were,” Zebarth says. “In particular, the potato early dying complex. This complex is caused by the fungal disease Verticillium wilt and, in Eastern Canada, is made more severe by the presence of root lesion nematodes.”

A difficulty facing the potato industry is the lack of an accurate diagnostic tool to test for potato early dying complex. Zebarth says work is being done in this area to develop a more effective soil test that will help growers to manage the disease.

Other methods for disease control are being considered, including bio-fumigation using mustard. The mustard produces a chemical compound called isothiocyanate, which produces the bio-fumigation effect; in field-scale trials, there was a noticeable reduction in pathogens and yields increased.

“Economically, using mustard bio-fumigation takes a field out of production for a season,” Zebarth admits. “But it could improve potato yields.” He suggests using this method on a field that is in distress and in need of help getting back to a healthy state. 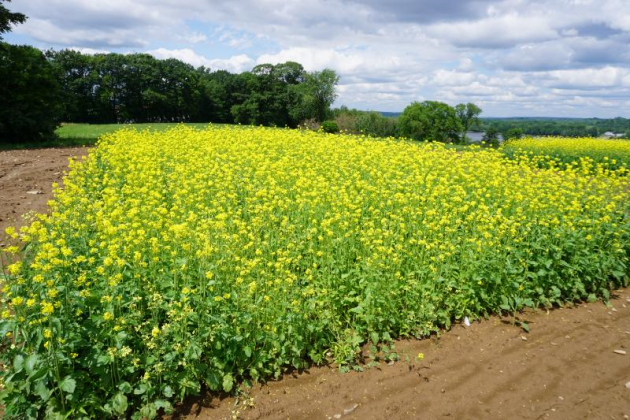 The mustard produces a chemical compound called isothiocyanate, which produces the bio-fumigation effect; in field-scale trials, there was a noticeable reduction in pathogens and yields increased. Photo courtesy of AAFC.

“There is no silver bullet for controlling potato early dying,” he continues. “We need to make progress on an integrated system.”

He says growers changing their attitudes towards best practices in every part of the operation could be key. Consider upgrading aging equipment to something more efficient and accurate, with the latest technology. If possible, choose equipment that is gentler and causes less disturbance to the soil. Also, trying the newest diagnostic tools and adopting new ways to control disease, such as bio-fumigation, will make a difference.

“We need to start thinking about soil as part of the farm infrastructure,” Zebarth advises. “If you use a simple return on investment approach for soil conservation practices, it’s hard to justify. But taking the whole process all together can lead to cumulative improvements that can be credited to all crops over time. If half the value of your operation is your land, you should do what you can to protect it.”

“We need to start thinking about soil as part of the farm infrastructure,” Zebarth advises.

An analogy for what Zebarth is suggesting is the purchase of a house. It’s one of the largest purchases made in a lifetime and no one would ignore repairing the roof when it starts to leak. With land being a grower’s largest purchase, the researcher believes it should receive the greatest care to ensure long-term success of the entire operation. The big difference, of course, is that while you can fix your roof quickly, it is not the same for your soil which, once depleted, may require several seasons to replenish it.

Zebarth suggests the industry may need to change its way of gauging success and move from an economics-only model to one that considers the long-term value of soil management. He believes that five years of study and the consideration of many ways to improve soil to ensure yield maintenance or improvement has identified some effective ways to protect the soil. While we still do not have all the answers, he admits, some management options, such as nurse crops, longer rotations, bio-fumigation, and adopting the latest technological advancements in equipment could stop the negative trend in potato yields.