An $815-million investment will modernize irrigation district infrastructure and increase water storage capacity, creating up to 6,800 direct and indirect permanent jobs and up to 1,280 construction jobs.

Alberta has more than 1.7 million irrigated acres, and in 2019, 51,174 of those acres were used for potato and seed potato production. Approximately three per cent of irrigated acres in the province are used for the potato industry.

The signing of a Memorandum of Understanding amongst all parties and agreement in principle for the CIB to invest about $407.5 million in this project, to be paid back by the irrigation districts, represents an innovative approach to financing the project.

“This visionary investment in agriculture is made possible thanks to the partnership between Alberta’s government, the CIB and irrigation districts,” said Devin Dreeshen, provincial minister of agriculture and forestry. “This expansion will see hundreds of kilometres of pipelines built, contribute about $436 million annually to Alberta’s GDP, and create over 8,000 jobs. The more than 200,000 acres of new irrigated farmland created from this expansion is roughly a third of P.E.I.’s total farmland. Alberta started out and always will be an agriculture powerhouse.”

Projects focus on increasing water conveyance efficiency and allowing more acres to be irrigated with the same amount of water. Modernizing and building new irrigation infrastructure will: 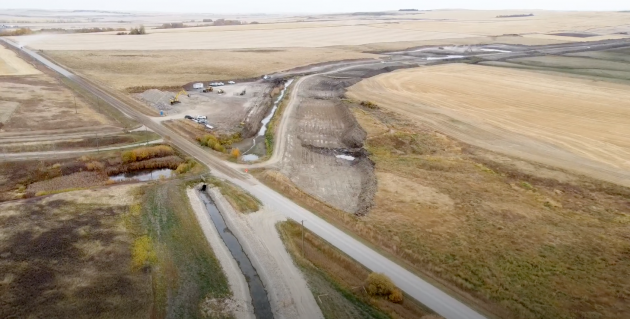 Projects focus on increasing water conveyance efficiency and allowing more acres to be irrigated with the same amount of water. Photo courtesy of Alberta Agriculture.

“This is a major development for Alberta farmers. Through the Canada Infrastructure Bank, and with our provincial counterparts, this investment will leverage private sector partners to significantly increase the acreage of irrigated land in southern Alberta. For farmers of grains, pulses, and other crops, this will not only increase the yields of their crops, but also the long-term sustainability of their operations,” added Marie-Claude Bibeau, federal minister of agriculture.

“This is a historic day, for the Western Irrigation District and for irrigated agriculture. A generational investment is being made to ensure productivity and stability of Alberta farms long into the future. With this funding, we will expand irrigation, increase water efficiency and make the service we provide to our water users even more secure,” said Dan Shute, board chair with the Western Irrigation District.

Irrigation-related agricultural processing generates about $2 billion in total annual sales and accounts for about 18 per cent of total provincial food processing sales. The irrigation industry contributes up to $3.6 billion annually to Alberta’s GDP, which represents about 20 per cent of the agri-food sector GDP on only 4.7 per cent of the province’s cultivated land base.

Alberta’s investment in irrigation follows Saskatchewan’s announcement months earlier of a $4-billion project that will double the amount of irrigable land in Saskatchewan over the next 10 years.