Features Crop Watch Harvesting
A year like no other

Farmers look ahead to 2021, expecting uncertainty due to COVID-19. 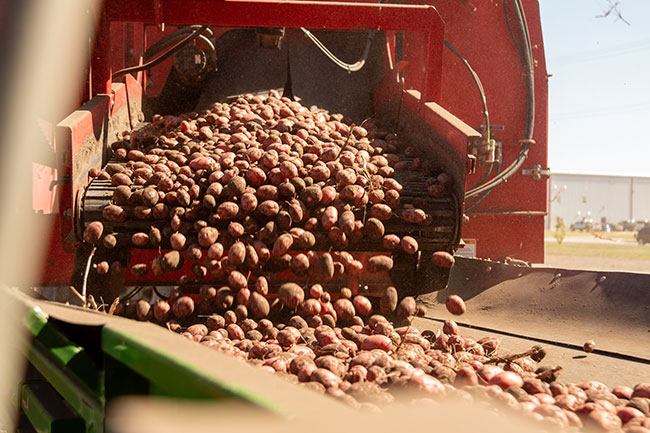 Kroeker Farms typically ships 15 semi-truck loads of fresh potatoes per day, but their orders were for double that amount during the COVID-19 pandemic. Photo courtesy of Kroeker Farms.

Whether their potatoes are seed, fresh, processing, chips or fries, every farmer uniquely experienced the 2020 growing season. Substantial gains and losses were felt coast to coast and clarity about the future remains elusive. The COVID-19 pandemic unleashed volatility and market vagaries like many had never experienced.

Canada reported its first case of COVID-19 in late January, and not long after, consumer demands and farmer contracts began to change drastically, before even one seed was planted. How the pandemic affected the potato industry varied among processing, fresh and chip farmers.

On Mike Wind’s farm, 75 per cent of his 900 acres of irrigated potatoes are primarily grown for chips with a small portion set aside for fries. It did not take long for the COVID-19 reality to sink in at Windiana Farms. On April 1, his fry contracts were slashed by 30 per cent.

“I initially thought it was a total overreaction because people are still eating,” he says. “People haven’t quit eating cause of COVID, they just changed where they’re eating.”

And, although Wind was disappointed with the fry side, the majority of his chip potatoes boomed, primarily due to lockdowns that had the majority of Canadians at their homes.

“People stayed close to the house and ended buying more snacks,” Wind says. “[Chip potatoes] did better than normal because of the pandemic.”

Wind had to make quick adjustments at his farm to accommodate worker health and safety. Increased safety and cleaning protocols were implemented immediately. Beyond that, Wind struggled with companies’ service. Businesses he regularly deals with began to take twice as long because of reduced staff and people working remotely.

But at his farm he found unusual bright spots. Qualified help in summer and at harvest is a perennial challenge, but not this year.

“It’s a problem, getting employees on our type of farm is very difficult,” he says. “For years we were challenged by the oil industry, but that has gone to hell in a handbasket, so we have some of those [people].”

Labour was so plentiful that Wind called off his usual temporary foreign workers from Mexico.

And, despite COVID-19 disrupting his operations in various ways, Wind is still optimistic for the immediate future.

“People are concentrating on staying in their area, they are buying locally,” he says. “I think that’s been a bright spot for us in agriculture.”

“People are concentrating on staying in their area, they are buying locally,” he says. “I think that’s been a bright spot for us in agriculture.”

However, the real elephant in the room for him is 2021.

“Everybody is sitting back and saying, ‘is there a second and third wave?’ What’s that going to do? People are sitting on the edge of their seat waiting.” 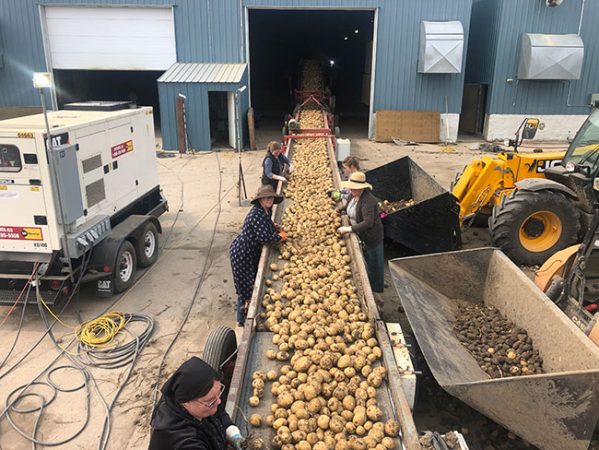 Mike Wind noted that COVID-19 had one unexpected benefit: local labour was so plentiful that Wind called off his usual temporary foreign workers from Mexico. Photo courtesy of Windiana Farms.

With 4,000 acres under fresh production, the COVID-19 pandemic morphed the potato tops at Kroeker Farms into dollar signs.

Throughout the winter, prices were already hot and Kroeker CEO Wayne Rempel said the farm was pacing itself as it neared the end of its marketing year. But then COVID-19 hit.

“Very soon after that, orders went nuts,” he says. “I thought potatoes were next to toilet paper as far as popularity was concerned. We couldn’t supply half of our orders.”

“Very soon after that, orders went nuts,” he says. “I thought potatoes were next to toilet paper as far as popularity was concerned. We couldn’t supply half of our orders.”

The company typically ships 15 semi-truck loads per day, but their orders were for double that amount.

So, while people were at home cooking with more potatoes, the Kroeker balance sheet went up, but then came down again on the other side. The farm’s food service potatoes for baking and mashed potatoes took a big hit due to lockdowns and travel restrictions. 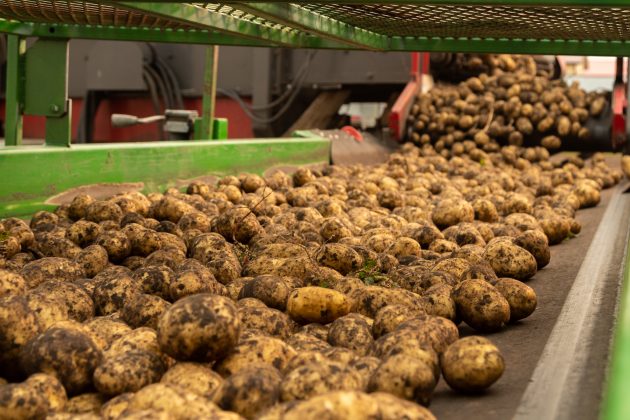 The Kroeker balance sheet went up for fresh potatoes, but then came down again on the other side. The farm’s food service potatoes for baking and mashed potatoes took a big hit due to lockdowns and travel restrictions. Photo courtesy of Kroeker Farms.

During summer and harvest, the farm peaks with about 300 employees. Each employee with their own level of risk assessment, which presents a challenge for Rempel and his managers to balance.

“Our challenge would be trying to balance those who are taking it very seriously with the disease and infection and those who tend to be cavalier about it and risky,” he says, adding the company implemented more meetings to emphasize safety and new protocols. “I encouraged those that aren’t careful, to be more careful, and those who are more fearful, I have tried to calm those. It turned out fairly well.”

The company managed to get through the season with only two cases, with both employees making a full recovery.

Into 2021, Rempel urges other farmers to stop planting based on history and try and gauge market signals for what the future may hold.

“I would always stress, and more so this year that let’s think about what is changing in the world and how do we respond to it.”

The 2020 year will be one to remember and forget for Raphaël Desjardins. First, it began unusually dry. So dry, in fact, that he began irrigating June 15, a full two weeks earlier than usual, which likely saved his crop. By then he and everyone else were already in the grip of the pandemic, which dramatically impacted prices.

Before 2020 price drops and spikes, Desjardins, a member of L’Union des producteurs agricoles (UPA), was awaiting results of negotiations with processors for a $3 per hundred pound raise that began in late 2019.

“I understand it was a lot, but in the context that we were, it was normal,” Desjardins says. “The processing plants were in great shape and the markets were good and all growing, but then when COVID hit, oof. All the restaurants closed and all the markets closed to us. It all stopped.”

Almost immediately, negotiations stopped for months, only to resume in the spring. The second round of talks produced a much less desirable final number, under $1. Desjardins is trying hard to be optimistic with the number.

“I saw it coming, it wasn’t a surprise that much,” he says. “Better than a drop or a flat price. I am happy that we had a raise.”

The pandemic did result in a brief two-week price spike for Desjardins, but then prices slunk back down. He counts himself lucky since his processing potatoes are destined for frozen buyers, which has more selling options than the fresh processing market.

His acreage was scaled back by 30 acres this year and a key contract was cut 12 per cent by a processor. He also had to cancel certain seed orders as well.

In addition, market forces pressed Desjardins to keep his spuds longer than normal. While his storage typically empties out by the beginning of May, this year he had to hold on for an additional two months.

“I don’t really have the facilities or equipment to store them,” he says. “The quality got affected a bit. I thought I would have had a great price, and it was just normal.”

“I don’t really have the facilities or equipment to store them,” he says. “The quality got affected a bit. I thought I would have had a great price, and it was just normal.”

His early irrigation and subsequent strong growing season was tempered by underwhelming price negotiations, but he still thinks 2021 may be better than this year.

“It’s still OK, we’re not super, super affected. It ain’t a catastrophe for the potato growers, but there are absolutely no positive points, none that I can think.”