Potato mop-top virus and powdery scab can be a tough twosome. 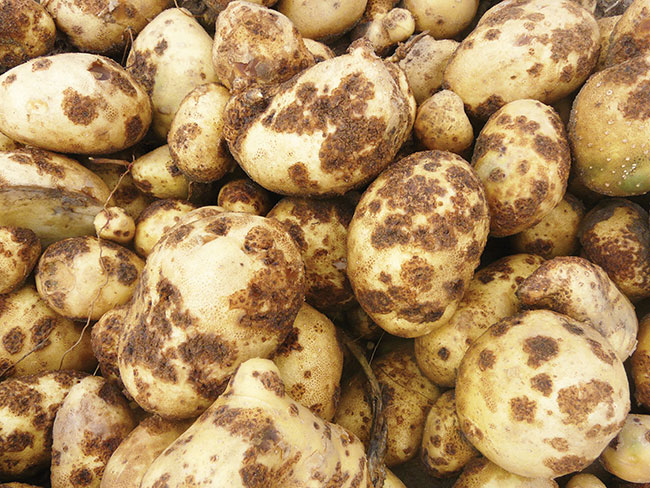 The potato mop-top virus can cause tuber necrosis symptoms, which are known as spraing disease. Photo courtesy of Xianzhou Nie.

Xianzhou Nie’s current research includes projects to learn more about PMTV in Canada, to develop a better way to detect both pathogens, and to find options to help manage the two diseases.

“Mop-top disease seems to be an increasing issue in the United States and in certain Canadian provinces. In the States, some people think mop-top could be the next production issue for the future because the disease can really affect tuber quality,” says Nie, a research scientist in molecular virology with Agriculture and Agri-Food Canada (AAFC) in Fredericton.

The virus can cause symptoms in potato tubers and foliage, although sometimes the infection is symptomless. “The foliar symptoms are mainly yellow arcs or V shapes, or a yellowish mosaic pattern. However, in New Brunswick, I hardly ever see these foliar symptoms; most of the time I see tuber symptoms,” he explains.

“When a susceptible potato is infected with the virus, it may develop some necrosis of the tuber tissues.” Necrosis refers to brown, dead tissue. If you cut open a PMTV-infected tuber, you may see a necrotic stripe, or necrotic flecks or arcs; these symptoms are sometimes called spraing disease. The virus may also cause symptoms on the surface of an infected tuber, such as rings or blotches.

Nie says, “A tuber showing internal necrosis may not cause harm to human health, but it really affects the end-use. For a processor, the necrosis causes quite a bit of loss, and for a consumer who cuts open an affected potato, the necrotic symptoms are an unappetizing surprise.”

“Sss is an obligate parasite. That means it needs a host in order to complete its life cycle. So scientists can’t cultivate the microbe in the lab, which makes studying it much more difficult,” he notes.

“Sss has a complex life cycle with sexual and asexual stages. The pathogen’s resting spores can survive in the soil for many years – 10, 15, 20 years. Then, when conditions become favourable, this resting form germinates, releasing zoospores. These zoospores are able to swim around a little in moist soils. A zoospore can penetrate a potato plant’s underground tissues, such as root or tuber tissues, especially through a wound or other opening. Once inside the plant, the zoospore goes on to develop and release new spores, which cause secondary infections.”

Although powdery scab may reduce potato yields, a more serious problem is that it causes brownish scabs on the tuber’s surface, which reduces the market value significantly for both fresh and processing uses.

And of course, another problem is that Sss transmits PMTV. Nie says, “When an Sss zoospore containing the mop-top virus infects a potato plant, the virus can be released into the plant as well.”

Both Sss and PMTV need cool, moist conditions to infect a host plant. The virus can survive for many years in the soil, protected within the protist’s resting form.

“Interestingly, when you plant a PMTV-infected tuber in the greenhouse, the plants emerging from that tuber are virus-free. This is called self-elimination,” he explains. “So, a PMTV infection in the field is almost always a new infection; it is not from the previous mother tuber. In other words, the infested soil contains the powdery scab pathogen, which contains the virus and that is the major source for the PMTV infection.”

Nie notes that there are no really effective ways to control PMTV and Sss at present. Some practices that may help to manage the two diseases include choosing less susceptible potato varieties, avoiding fields that are known to be infested, avoiding poorly drained fields, and cleaning soil from field equipment before leaving an infested field. Although a longer crop rotation won’t get rid of the two pathogens, it could help to reduce the inoculum levels in the infested soil.

The researchers and the industry want to get a better handle on the issue of tuber necrosis in Canada, so this project is studying all the major tuber-necrotic viruses: PMTV, tobacco rattle virus, potato virus Y strain NTN, and alfalfa mosaic virus.

One of project’s objectives is to determine the occurrence of these four viruses. So far, Manitoba and New Brunswick are providing tuber samples for analysis. In those samples, PMTV is the most commonly detected cause of tuber necrosis.

A faster test for PMTV and Sss
Since PMTV’s symptoms may be confused with symptoms of other potato problems and since PMTV-infected plants sometimes have no symptoms, laboratory tests are needed to confirm the virus’s presence. However, the traditional testing methods are time-consuming.

So, as part of the Horticulture Cluster project, Nie and his project team have developed a faster, more efficient test that detects not only PMTV but also Sss – the first method able to detect both pathogens simultaneously.

According to Nie, it is very difficult to inoculate potatoes with PMTV, and the pathogen is particularly hard to detect in soil samples. “Until we developed our new method two years ago, the detection of the mop-top virus always used a bait method. With this method, if you suspect that a soil is contaminated with the virus, then you grow a bait plant, like a tomato or tobacco plant, in the soil. If the bait plant becomes infected with the virus, then you can detect the virus from that plant.”

The bait method takes at least a couple of weeks, including time needed for the bait plants to be transplanted into the soil and become infected and time to conduct a lab test to detect the virus extracted from the bait plant tissues.

In contrast, the new method can detect the virus directly from soil samples and can be completed in two to three days.

The new test uses a technique called high-resolution DNA melting (HRM) analysis. Nie explains that HRM is a form of PCR test, but it is simpler and quicker than a regular PCR test. Regular PCR testing involves first ‘amplifying’ the region of interest in the organism’s DNA to create millions of copies of that region. This amplified region is known as an amplicon. The amplicon’s DNA is then extracted using a process called gel electrophoresis, and then those results are analyzed.

“Recent-model PCR machines can automatically detect and record these melting temperatures. We just need 5 minutes to do the melting test, so it saves a lot of time and effort,” Nie says.

“[Because the HRM test is much more efficient] we can use it for large-scale surveys of fields to see which fields are infested with PMTV, or Sss, or both PMTV and Sss. Growers could use that information to help in managing these diseases. For instance, if you know a field is infested with PMTV and Sss, then you could take steps to minimize the movement of soil from that field to other fields as a way to limit the spread of the virus and the protist.”

Potato variety trials
Nie and his team used their new HRM test to identify a highly infested area within a PMTV-infested field in New Brunswick. In the Horticulture Cluster project, they are using that location to conduct their trials to determine the sensitivity of different potato varieties to PMTV-induced tuber necrosis.

Such varietal information could help growers, breeders and the industry to reduce the occurrence of these necrotic symptoms in Canadian potatoes.

The team conducted the field trials in 2019 and 2021, and they will be continuing this work in 2022. (The 2020 trial was cancelled due to COVID restrictions.) Nie says, “In total so far, we have tested 21 potato varieties. All of the varieties are commercially important either to our collaborators or to the industry.”

Nie emphasizes, “Even the cultivars that seem less sensitive are not resistant to PMTV. They still can be infected by the virus, but they are less prone to having tuber necrosis symptoms.”

Could trap crops help?
Nie and Dahu Chen, a plant pathologist at AAFC-Fredericton, are collaborating on a project to explore a different idea for suppressing powdery scab and mop-top disease in New Brunswick. This project is funded by Enabling Agricultural Research and Innovation, a program of New Brunswick Agriculture, Aquaculture and Fisheries.

“Dahu came up with the idea that we may be able to use trap crops to manage these diseases. Potential trap crops would be plant species that can be infected by Sss but that do not enable Sss to complete its sexual cycle and form resting spores,” explains Nie. Such trap crops could be included in the crop rotation of an infested field to reduce the field’s inoculum levels of Sss and PMTV.

COVID limitations and restrictions have slowed the project’s progress, but the project team has been able to do some screening in the greenhouse. They have been testing different varieties of several crop species, such as tomato, red clover, alfalfa, canola, rapeseed and radish, to see whether the roots can be infected by Sss. They have identified some that seem to be susceptible to infection by Sss.

Nie is hopeful that the new information and methods generated by his current PMTV and Sss studies will help provide a foundation for developing improved, best management strategies for controlling mop-top disease and powdery scab.