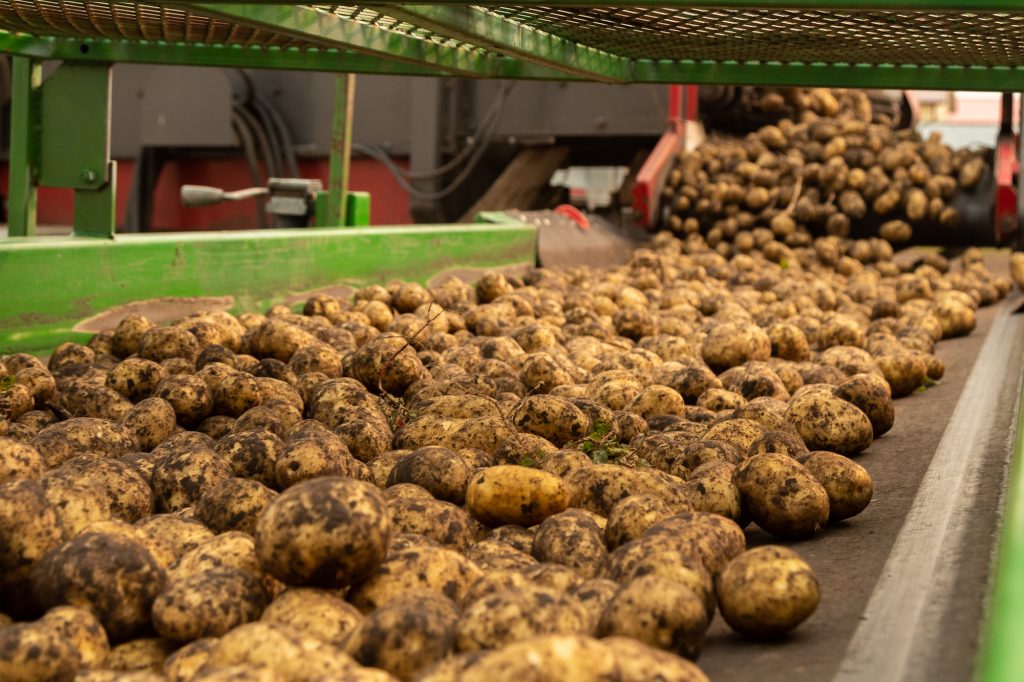 Potato harvest in Canada is complete in most provinces with the exception of Quebec, the United Potato Growers of Canada (UPGC) writes in its final crop report for 2020 on October 26.

Quebec is  about 90 per cent done, UPGC writes, and hopefully should finish up by October 31 as the weather forecast improves from the wet and cold conditions experienced over the last couple of weeks.

In other areas, growers are thankful to have received some of the best harvest weather in recent years creating rapid progress, finishing ahead of schedule. This is certainly in contrast to last year where 22,500 acres had to be left in the field and also 2018, where 18,000 acres had to be abandoned.

Based on what we know today, Canadian potato production is substantially below that of 2019 and below the country’s five-year average. Statistics Canada is currently collecting yield data from potato producers until November 16 with the final production estimate available on December 7. In the meantime, reports from the various provinces could point to a decline of 7,000,000 hundred weight below the 2019 crop. Based on the hot, dry growing season experienced in many provinces, UPGC earlier had put reductions at 6,000,000 hundred weight, but revised it after New Brunswick growers finished harvesting and realized one of their lowest yields on record. Countrywide, this would translate to a seven per cent reduction, but UPGC notes they are waiting for more accurate data on December 7 from Statistics Canada.

Looking across the various sectors, fresh production has been shortened up in the provinces of P.E.I. and New Brunswick. Table potatoes have been moving from Quebec into New Brunswick for some time now to replenish some of that supply. French fry plants in P.E.I., New Brunswick, and Manitoba also will not likely to be able to cover all of their needs without importing potatoes from other areas. Seed potato supplies could be tight for spring planting. Chip production appears to be up in Ontario, and Quebec, and all of that supply is needed to meet increased demand.

French fry plants in P.E.I., New Brunswick, and Manitoba also will not likely to be able to cover all of their needs without importing potatoes from other areas.

The potato harvest on P.E.I. is 98 per cent completed. Many growers have finished and those still harvesting will wrap up the last 1,000-1,500 acres in the next few days. The final week has been a little wet but otherwise, digging conditions have been excellent.

The central part of the island, where 50 per cent of the crop is grown, was most affected by the drought this summer. Yields in non-irrigated fields in that area are variable but most are down significantly. The rest of the province should be close to average which would pull overall production down by 15 per cent. Gravities are high and overall quality is excellent so storability should be very good. The P.E.I. potato industry is anticipating strong demand, unless COVID-19 changes the situation.

Harvest is complete in New Brunswick with all acres being harvested due to excellent harvest conditions. The yield is down anywhere from 25 to 40 per cent depending on the location, with those further north getting better yields.

Overall this is the smallest crop that many long-term growers can remember. The size was smaller on some varieties, but those with a lower set did size up well. Gravity was up on most varieties and type was good.

There will be a shortage of production in all sectors; for table, some supply has been brought in from Quebec, both for storage and to feed packing lines. The current size profile will need increased demand for smaller sized packs to accommodate this year’s supply. Shippers will likely also be challenged when participating in retail ad promotions. Processing yields will not cover contract volumes so supply will be shortened for French fry production in the province. Raw potatoes will either need to be imported, or finished product exported, from other company plants. Seed is in short supply and expected to be in high demand.

The potato crop in Quebec was poised to be one of the best in the country this season, however Mother Nature has not been kind in recent days. Harvest completion is estimated at 90 per cent, with many growers done.

However cold and wet conditions particularly in the Gaspe, Rimouski, and Lac-St. Jean areas have been creating a struggle for those producers to bring their crop in. The weather is forecasted to improve in the coming days which should allow most growers to finish their work by the end of the week.

Yields have been good, especially on the late season Russets, although cullage may be a little higher on defects such as off-type, and growth cracks. There may also need to be some abandonment calculations, depending on how the harvest ends on those final acres. Quebec growers are optimistic given the good demand for their product and returning good prices.

Harvest is basically complete in Ontario with just a few acres on heavier ground waiting for drier conditions to come out. Yields in the province are finishing up strong with some growers reporting this crop to be one of their best in recent years.

Although the early fresh crop started off a bit light due to hot dry conditions, irrigation was a key component for some growers and good rainfall made the storage crop for others. The higher rainfall areas have growers on the look out for any pink rot issues and processors are working diligently with growers to move any lots that need different scheduling.

Given the good demand in the chip industry, that sector may need to pull potatoes from the fresh side to meet their requirements. Plants have been running steady since August 1. Fresh potatoes should also be in demand and command good pricing given the overall table reduction in the four eastern provinces.

Harvest on the processing side was completed in record time this year with completion anywhere from September 23 to the first week of October. Very few acres were not harvested this year, a relief for growers and a stark contrast to 2019 where they struggled against wet and cold conditions.

Harvest conditions were good with the exception of one or two hot days during late September. Conditions also got dryer as harvest progressed. Quality is good, not outstanding, but a crop that should store very well. Yields were lower than growers would have liked and will likely come up 15 per cent short of processor needs.

The table harvest in Manitoba was completed on October 13, much earlier than normal, due to no harvest delays. Skin set seemed to take longer this year, perhaps due to a hot dry summer, so growers had to be vigilant with skinning and also keep an eye on hard clods in the soil which exacerbated the issue. Yields are surprisingly near average, given how hot and dry the summer was. Tuber sizes are quite variable with an unusual combination of smalls and very large potatoes coming from the same field.

Harvest is complete in Saskatchewan, with very good conditions and no abandoned acres. Yields were similar to slightly below last year.

The potato harvest is fully complete in Alberta with many growers finished by the end of the first week of October. Harvest conditions were excellent, in fact, some of the best in years, and a reprieve from last year’s difficult one. Any unharvested acres were likely more related to drown outs from earlier in the spring.

The harvest in B.C. wound up some weeks ago due to good harvest conditions with the exception of one high rainfall weekend. Any acres left, were due to lack of storage space rather than weather related issues.

The crop experienced good maturity which in turn provided great quality. Yields are certainly equal to those of last year. Russets are a bit short in supply, but there are also additional yellows available for export. B.C. expects their market to be very stable this year for both supply and pricing.