Features Agronomy Traits and Genetics
The Lumper: A humble potato that changed history

The “wet, tasteless and unwholesome” potato variety that triggered the Irish Potato Famine. That is the Lumper’s unhappy reputation. This much-maligned tuber piqued the interest of Vanessa Currie, who leads the potato variety trials at the University of Guelph’s Elora Research Station, northwest of Guelph, Ontario. Naturally she wanted to try it out. 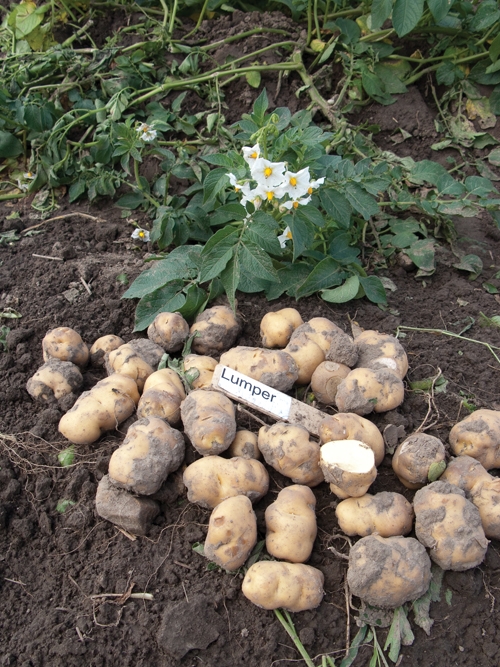 Currie first learned about the Lumper when she was asked to be one of the potato specialists in a proposed docudrama about the Irish potato famine. Potatoes, which are native to South America, were brought to Ireland by the late 1500s. By the early 1800s, millions of poor Irish people relied on potatoes as their only crop and only significant food source. Then in 1845, late blight struck the Irish potato crop. It wiped out almost half the crop that year and nearly the whole crop the next year. During the six years of the famine, more than a million people died from starvation and related diseases, and another million emigrated.

The Lumper was the variety eaten by Ireland’s poor and also the variety most affected by late blight at the start of the outbreak. “In researching the late blight and the Irish Potato Famine, I got interested in the cultivars that they were using. Three cultivars were commonly grown: Apple, Cup and Lumper. Apple and Cup were considered quite edible, but the Lumper was most reviled. It was considered wretched, unpalatable, unfit for humans, and even beasts would reject them if another variety was available,” says Currie. “It seems that the Lumper’s abundance was based solely on economics. It outyielded the others by as much as 30 percent. At a time when hungry bellies were plentiful, people filled them with Lumpers. I was fascinated at the idea that four million people could be fed on a potato that was considered ‘scarcely food enough for swine.’ How bad could it be, if an entire population was living and thriving almost exclusively on it?”

She notes, “I have tested new potato germplasm for more than 20 years, and seen thousands of different selections and varieties. Some are worse than others, but I have never tried one that sounded as awful as the Lumper.”

To find out where to get Lumper germplasm, Currie contacted Jane Percy at the Potato Gene Repository of Agriculture and Agri-Food Canada (AAFC). The Gene Repository, which is at AAFC’s Potato Research Centre in Fredericton, New Brunswick, keeps Canadian and international potato germplasm. It turned out that the Lumper is one of the heritage potatoes in the Repository’s collection, so Percy sent some tissue culture plantlets to Currie in the fall of 2008. “I grew the plantlets in the greenhouse last winter and got little mini-tubers that I was able to plant at the Elora Research Station in the spring of 2009,” says Currie. Although she did not have fully grown seed potatoes to do a regular trial, she was able to do a small test with 200 Lumper plants.

The mini-tubers grew quite well and produced large, vigorous vines that looked like the other potato varieties. She adds, “Late blight is a worry for growers all across Canada, and people learned that the hard way in 2009. But the Lumper doesn’t bring any more risk of this disease than any other variety.”

Currie and her summer students dug up and cooked some Lumpers for participants at the station’s August open house. “The yield was good and it was not hard to see why so many poor families had thrived on them,” she says.
“The tubers were oval to oblong in shape, with deep eyes and a rough, knobby appearance. The skin was smooth and pale. The flesh was cream coloured, not white, but not yellow. They were quite possibly the most ugly potatoes I have grown.”

Surprisingly, the notorious tubers tasted quite good, pretty much like any ordinary potato.

Part of our past
Perhaps the Lumper’s reputation has taken a few undeserved lumps? “The Lumper’s poor reputation seems to have preceded the blight and the famine. But I don’t know why people would think it was that much worse than the Apple and the Cup,” says Currie. “Maybe it was just the taste of the people at the time, maybe their storages were poor and musty, maybe some of the Lumper potatoes were a bit blighty all along and a bit rotten. Maybe the next step is to grow the Apple and the Cup here as well to see if there are some differences!”

She notes that the humble Lumper taught a tough lesson about monoculture production. “I think the blight and famine in the mid-1800s were a real wake-up call to agriculture in general. They learned that they couldn’t rely on just one variety. In South America, the population there at the time had hundreds and hundreds of potato cultivars that they grew all the time, so if one failed or did poorly, they had others.”

The Lumper’s lesson was taken to heart in Canada, she says. “We have historical records at the University of Guelph dating back to the 1890s in which they were doing potato trials, testing hundreds of varieties. Those records say that in Ontario at the time there were some 4000 farmers doing different plant research on their farms. That’s amazing!
“I think the intense interest in crop breeding and varieties was a direct result of the failure of the monoculture only a generation or two before that. The people doing those trials in the 1890s would have been the children and grandchildren of people who had died or emigrated from that famine. They saw the relationship between breeding, diversity and protecting the crops we want to grow.”

Currie will put the Lumper in the Elora Research Station’s regular potato trials in 2010, and will conduct the regular evaluation of characteristics like yield, taste, cooking and storage. The goal of these annual trials is to identify new chipping and table varieties with commercial potential for Ontario. AAFC potato breeders in Lethbridge and Fredericton, as well as breeders from the northern United States send their selections to the station for testing. In 2009, about 120 potato selections were evaluated.

Results from the trials are provided to breeders, growers, processors and retailers. The trials are supported by a long list of funders including the Ontario Potato Board, Farm Innovation Program, Ontario Research and Development Program, Ontario Ministry of Agriculture, Food, and Rural Affairs, University of Guelph, AAFC, and Canadian Snack Food Association.

What’s in a name?

While the Lumper is indeed a lumpy looking tuber, that’s not how it got its name. Vanessa Currie learned from John Reader’s book, Propitious Esculent: The Potato in World History, that in the 1800s dock labourers in England who unloaded timber cargos were called lumpers. She says, “We have the term ‘lumberjack’ here, but they were originally called ‘lumperjacks.’” Many lumpers were Irish, and it is thought that some lumpers returned to Ireland with the variety, so it was called the Lumper.