Features Agronomy Crop Protection
The dark side of black cutworm 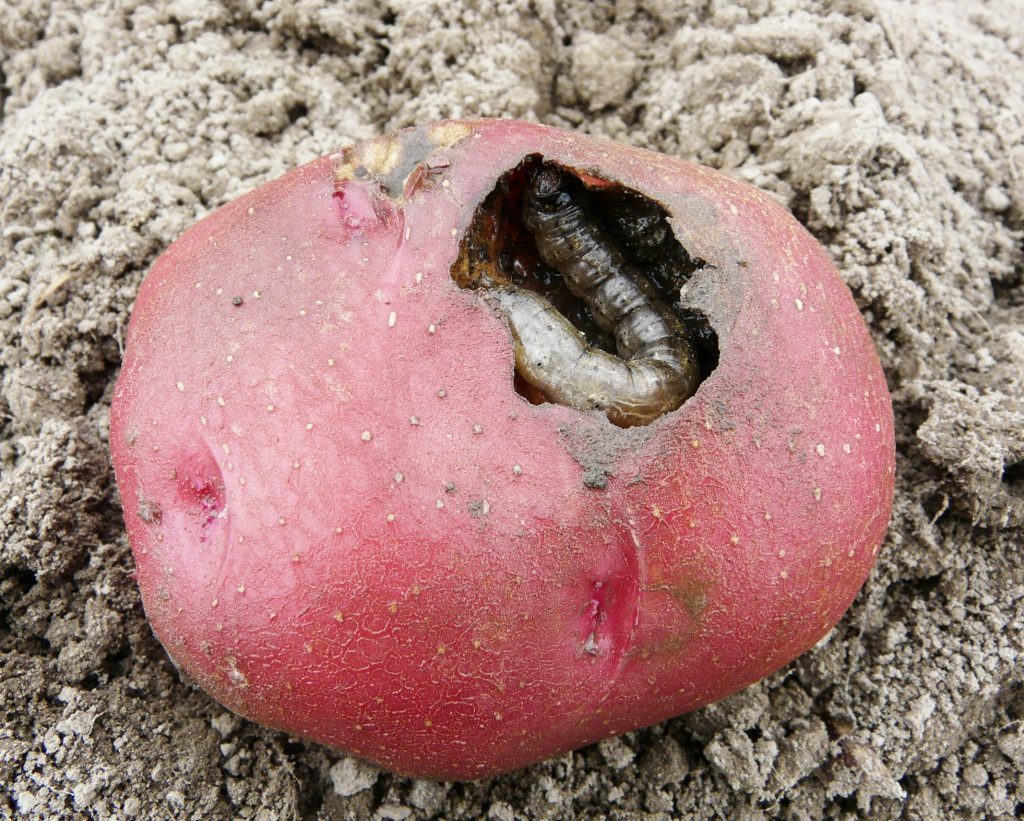 Just because black cutworms don’t overwinter in Canada doesn’t mean they aren’t a threat to potato crops. The insects spend their winters in the southern United States but travel north on low-level jet streams and, once they cross the border into Canada, they look for a tasty food source. Black cutworm moths prefer some of the weeds that grow in and around fields and, while potatoes are not their favourite food, they will adapt and can wreak havoc on an unmonitored field.

A researcher at the University of Minnesota says the cutworms’ new interest in potatoes could be the result of a change in potential host plants. If the moth’s desired weed is being well controlled in a field, it will eat what is available where the wind sets it down.

“Black cutworm moths are active flyers,” explains Ian MacRae, the extension entomologist at the university’s Crookston research station. “These insects can travel hundreds of miles in a short period of time aided by an extremely efficient bug highway [a jet stream].”

MacRae says if the wind and temperature are conducive and Canadian potato producers are able to get their crop planted in good conditions, there is a chance the moths will arrive about the same time as the plants are emerging. The possibility exists that early arrival could spawn a second generation of the insects later in the season. He says, once landed, reproduction occurs when the moths lay eggs. The emerging larvae will feed on the foliage, but once at the fourth or fifth larval stage they will begin actively eating near the base of the host plant, cutting it off.

“The first you might notice a cutworm problem will be plants that are cut at the base or wilting,” MacRae explains. “At night, the worms burrow into the soil and if the tubers are close to the surface, they will burrow into the tuber. They can do more damage to tubers in dry conditions because cracks in the soil will give the cutworms access to what is underneath.”

Damage to potato crops early in the season can be a greater problem because the young plants will not recover from being chewed off. There is a possibility that the seed piece might send up another shoot, but the crop will be set back. MacRae suggests early scouting will help identify the problem and allow time for control. There are effective insecticides for control of black cutworm and there are sources of natural mortality, such as predators or parasitic wasps. Birds may be less effective because of the location of the worms and their habit of eating at night.

“If you find yourself at a threshold of about 30 per cent of your plants cut, you may want to apply an insecticide,” MacRae says. “If defoliation is this high, it may be that natural mortality sources are not functioning well.”

Ensure proper identification of the larvae as black cutworms so the correct product can be chosen for control. Combining regular field scouting with pheromone or light traps to catch the male moths is an effective way to identify the insects.

“When scouting, look for stalks at an odd angle or wilting,” MacRae suggests. “Look in the evening when the cutworms come out to feed, and look as much as a half metre away from the plant because they are good walkers. Black cutworms are aptly named because they are a dark caterpillar with a waxy appearance. They will often curl into a C if disturbed. They hang out during the day under clods of soil or in cracks.”

MacRae says climate change may be the reason black cutworms are being seen farther north. He doesn’t believe they will begin to overwinter in Ontario or the Prairies, but a warmer climate means they develop faster and may overwinter in more northern states, making the migration north earlier and causing greater problems.

“Black cutworms have certainly become a problem in Ontario in the last few years,” MacRae says. “They can be a significant pest issue.”

MacRae adds there are some cultural practices that may minimize the impact of black cutworms when they arrive. Planting late can put new, young plants directly on a collision course with the moths and their offspring, so plant early, if possible. He says controlling weeds will reduce the areas where the moths might lay eggs. Growers in the United States use pre-plant tillage to turn over the soil to destroy potential habitat.

To date, there is no accurate monitoring system in place for potato crops, according to MacRae, but the cutworms also like corn and the corn growers in some states, such as Iowa, have a black cutworm monitoring network. “The moths seem to appear in Ontario about three weeks after they are seen in the United States,” he says. Ontario growers could tap into the monitoring networks south of the border and use that information as an early warning system, he suggests.

Black cutworms could be considered a stealthy yield robber because by the time you begin to notice a problem, it could be a challenge to execute effective control. The best defence is early and frequent field scouting and adopting cultural practices that could minimize the attractiveness of the crop. MacRae believes Canadian potato growers will see black cutworm more often in the coming years, so preparation for and understanding of the pest is a wise approach.