Wild potatoes acquired from a gene bank in Germany six years ago are producing promising results for Agriculture and Agri-Food Canada researchers trying to develop superior Canadian varieties with resistance to some of the most problematic potato diseases.

Dr. Benoit Bizimungu, head of potato breeding at the Fredericton Research and Development Centre, said a number of hybrids bred from these wild varieties could be ready for industry trials next year.

Bizimungu selected the German plants because of superior traits such as high yield, as well as strong natural resistance to PVY, late blight, drought, and insects like the Colorado potato beetle.

“Although the primary interest was multiple disease resistance and high yield potential, a number of progenies show a nice deep yellow flesh color, which is usually associated with carotenoids,” Bizimungu explains. This is great news for consumers who want more antioxidants in their diet.

“What is really exciting is that some of these wild species have never been used in potato breeding before now,” he says. “Using these new parents broadens the genetic base.”

“It’s good to have multiple sources for breeding, especially for things like late blight where it keeps changing.”

Dr. Bizimungu obtained this unique plant material as a result of his collaboration with potato geneticist Dr. Ramona Thieme of the Julius Kuhn-lnstitut (JKI) at the Federal Research Centre for Cultivated Plants in Braunschweig, Germany.

The imported species come from wild potato cultivars that originated in South America, the birthplace of the potato. 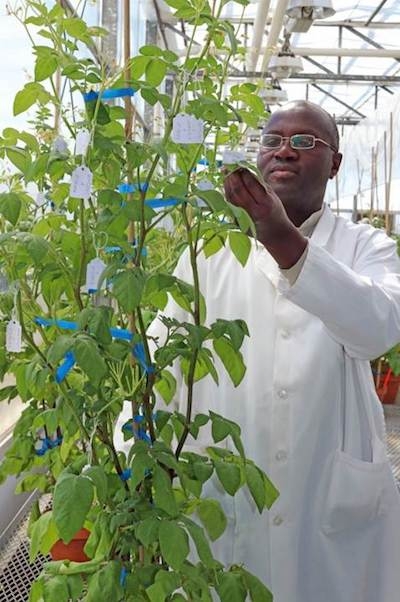 Dr. Benoit Bizimungu checks potato plants sourced from Germany to use in the potato breeding program at AAFC's Fredericton Research and Development Centre.
Print this page