The practices used in selecting and preparing seed potatoes for planting play a big role in getting your crop off to a great beginning. 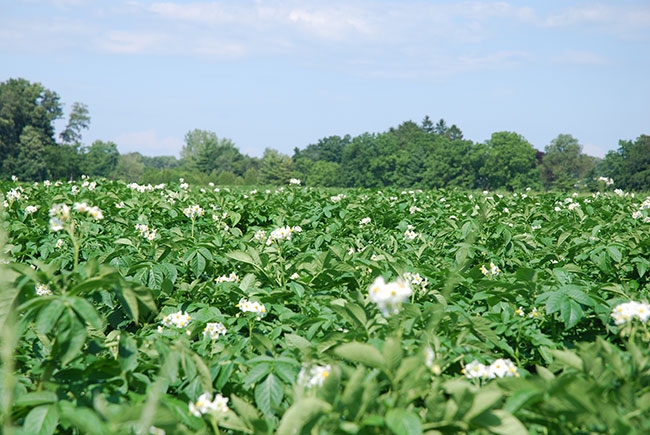 Healthy seed is the foundation of a high-quality crop. The practices used in selecting and preparing seed potatoes

Selecting seed
When it comes to seed selection, seed health is top priority. “Healthy seed is the foundation of a high-quality crop and high marketable yield. Management practices will not make up for a seed lot with poor vigour,” says Eugenia Banks, a potato consultant for the Ontario Potato Board. “Growers strive to produce a complete stand of uniform plants with the potential for high yield and quality. That requires quality seed.”

She identifies key factors to consider when selecting seed: “Choose seed that has been inspected by the Canadian Food Inspection Agency (CFIA) and graded as certified or higher class. The seed should be essentially free from seedborne diseases including Fusarium dry rot, late blight, soft rot, common scab and Rhizoctonia. There should be no stem-end discoloration.

“Testing for potato virus Y (PVY) should show the infection level is less than four per cent. Also, if the seed was produced in jurisdictions where Dickeya dianthicola – the new blackleg disease – was a problem the year before, growers should request a test for this emerging, destructive bacterial disease.”

As well, Banks advises growers to avoid physiologically old seed. The physiological age of a seed lot depends not only on its chronological age but also on the environmental and management conditions that it has undergone. Physiological age increases with things like growing season stresses, warm storage temperatures, wounding, bruising and cutting.

Compared to middle-aged seed, young seed is more vigorous but tends to emerge slower, to produce fewer but larger tubers, and to mature later. If you have young seed, then you have the flexibility to choose whether you want to plant young seed or to use warming and/or cutting practices to move the seed toward middle age.

Mike Wind of Windiana Farms near Taber, Alta., grows chipping varieties and Russet Burbank for the french fry industry. He has developed a set of seed prep practices that have been working well for their farm for about the last 10 years. His tip for seed selection is to know your seed source. “Your relationship with your seed supplier is very important.”

“We like to bring our seed in five weeks before planting, if possible. That way we can get the temperature of our seed where we want it,” he adds.

Potato pathologist Khalil Al-Mughrabi, with the New Brunswick Department of Agriculture, Aquaculture and Fisheries, offers tips for when the seed is delivered. “Before bringing seed onto a farm, all machinery, cutting knives and equipment [that will come in contact with the seed] should be disinfected,” he says.

“Growers should visually inspect seed potatoes within 24 hours of delivery. Any signs of a disease in the seed should trigger a red flag. Send a sample to your extension service department to have a formal diagnosis done. Growers can cut a sample of tubers and look for rot symptoms. A buyer has only 24 hours to request a re-inspection after delivery. Some growers ask for a test certificate indicating freedom of the seed lot from late blight.”

Warming, cutting, precutting
Even though cutting is a common seed preparation practice, Banks sees a lot of advantages to planting whole seed.

“Cut surfaces provide points of entry for bacteria and fungi. While there are seed treatments for fungal pathogens, mainly Fusarium dry rot and Rhizoctonia, there are no treatments for bacterial pathogens like blackleg and soft rot, which can cause poor emergence in wet years. In addition, cut seed is not recommended for varieties that have most of the eyes concentrated near the bud end and only a few eyes near the stem end. Cutting these varieties results in many blind seed pieces that will not produce plants,” she says.

“Planting whole seed eliminates the cost of cutting. Whole seed is also more tolerant to the stresses of high soil moisture and low soil temperature. However, whole seed is more expensive because of the extra grading required to produce seed lots of uniform tuber size.”

Nevertheless, she notes, “Ontario potato growers are successful in cutting, treating and planting potato seed. Trials comparing whole and cut seed do not usually find differences in marketable yield or tuber quality unless there was a cool, wet spring.”

Before handling, the seed needs to be warmed up from its recommended storage temperature of three to four degrees. Warming helps prevent bruising, and it may also be needed to break dormancy and speed up crop emergence.

If seed is to be cut, Banks generally recommends warming it to about 10 C a few days before cutting. “Warm seed not only cuts better with less tissue tearing, but is also more physiologically active and heals faster than cold seed,” she explains. “However, warming seed tubers for periods longer than two weeks or at temperatures higher than 10 C can result in excessive sprouting and physiological aging leading to lower yields, decreased tuber set, and smaller tubers.”

Al-Mughrabi recommends grading the seed again after cutting to remove any tuber rot, and frequently disinfecting the cutting equipment using quaternary ammonium-based products. Banks adds, “Seed cutters should be cleaned and sanitized at least daily while cutting, and always before cutting a new seed lot.” The knives need to be kept sharp.

The seed should be cut in blocky pieces, with a preferred size range of 1.5 to about 2.0 ounces (43 to 57 grams). For varieties with wider in-row spacing, the seed pieces should be slightly larger than 2.0 ounces. Pieces smaller than 1.5 ounces produce fewer stems. Very large seed pieces tend to have more severe bruising, which increases the risk of seed-piece decay, and to have poorer emergence and less vigorous growth.

Healthy seed is the foundation of a high-quality crop.

At MacAulay Farms Inc., near Souris, P.E.I., they grow Prospect, Shepody, Russet Burbank, Ranger Russet and Dakota Russet varieties, producing their own seed for some of these. They grade the seed in early to mid-April and then put it back into their temperature-controlled storage, keeping it at about 3 C until cutting time approaches. Then they let the seed gradually warm to about 7 C and cut the seed. “The majority of the potatoes are cut into blocky, good-sized seed pieces,” explains co-owner Paul MacAulay. “The seed is then treated and placed in bulk trucks with air moving through, for one to two days, before planting.”

At Windiana Farms, they precut and treat their seed up to three weeks before planting. Precutting involves cutting, treating and curing the seed, then storing, re-warming and planting it.

“The seed treatment application is a very important. We found that seed piece decay has all but been eliminated using this process,” he adds.

Banks explains that proper curing and storage conditions are critical for precut seed because of the high risk of seed piece decay, particularly from Fusarium dry rot. To cure precut seed, she advises holding it for about six to 10 days after cutting under conditions that favour wound healing. Those conditions include about 95 per cent relative humidity (but no free water), airflow that provides adequate oxygen and removes excess carbon dioxide, and proper temperatures based on the seed’s physiological age. She recommends a temperature no higher than 7 C for middle-aged precut seed, and 15 C for young precut seed. She adds, “Some growers use pallet boxes to hold precut seed while others place it in piles no more than four to six feet deep.”

After precutting and curing, the seed can be stored at around 4 or 5 C and about 95 per cent relative humidity for one or more weeks until a few days before planting, when it is re-warmed.

“Seed lots with excessive bruising or evidence of diseases such as Fusarium dry rot or soft rot are poor candidates for precutting. In addition, only seed that is physiologically young or middle-aged should be precut because precutting ages the seed,” Banks points out.

Seed treatment considerations
“Seed treatment provides a low-cost insurance policy for protecting seed until the first shoots emerge,” Al-Mughrabi says. “However, there are a finite number of seed treatment products available to Canadian growers that are designed to combat pests and diseases affecting specific regions of the country. As a result, the arrival of new products on the market is always noteworthy – but growers should be aware of the costs and benefits in order to make wise choices.”

Pre-planting tips
Banks lists some practices to keep in mind when getting ready to plant: “Sanitize and calibrate the planter. Make sure there are no planter parts that bruise the tubers; bruises affect seed vigour. Do not leave seed potatoes for long periods of time under the sun on hot days. Cover the seed truck with a tarp on rainy days or park it under a canopy. Also, train personnel on safety regulations.”